It is said apathy is the worst insult and by this token Microsoft must be fuming. In the five months since its release sales of Windows 8, the company’s self proclaimed revolutionary operating system, have been described as “on par” with Windows 7 despite a fire-sale launch price. And growth of touchscreen monitors, laptops and Windows RT-based tablets has been modest.

Furthermore, partners are unhappy. Both HP and Samsung have recently ditched Windows RT tablet launches, Acer and Asus have publicly stated Windows 8 demand is weak and Fujitsu even blamed the platform for its poor financial results at the end of last year. Never fear, Windows Blue is here. Well, kind of… 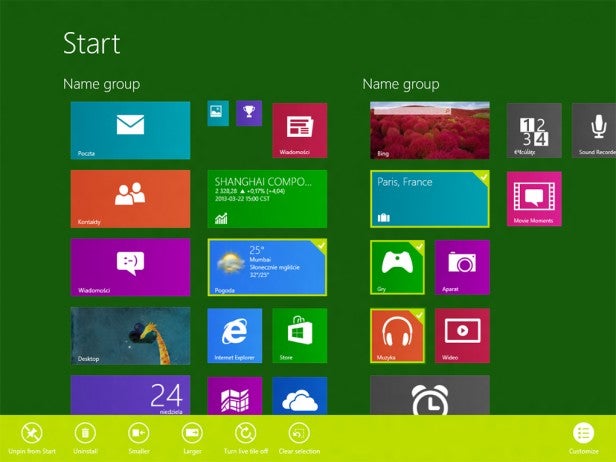 In the Blue Corner
In the most convenient of leaks “from a Microsoft partner based in France”, an all-singing, all-dancing beta of the major Windows 8 update codenamed ‘Windows Blue’ (pictured above) touched down this week. It installs smoothly, has no obvious bugs and brings a raft of new functionality which Microsoft hopes will inspire those as yet unmoved but its hybrid OS.

The feature list is long and includes re-sizable Live Tiles, new Snap Views for fitting apps side by side for better multitasking, access to the majority of core settings without the need to go into desktop mode and tighter integration of SkyDrive with options for it to automatically upload images and videos. There are also tweaks to improve the Charms interface, a preview of an even more touch friendly Internet Explorer 11 and new built in apps including dedicated alarm, calculator and video editing apps.

Dying Desktop?
Look closely at these improvements and you will see an obvious theme. They tie Windows 8 closer to the experience of Windows Phone 8 and lock users more tightly into Microsoft’s services.

More interestingly though, in bringing greater control and functionality to its touch-centric start screen, Blue has the potential to significantly reduce the time users need to spend in the desktop mode. In fact the desktop mode itself, while getting a technical bump from version 6.2 to 6.3, appears to have received no significant updates whatsoever. 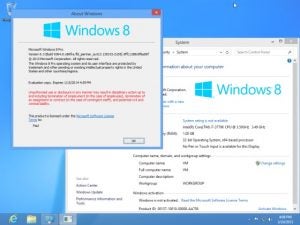 Yes, while Microsoft’s marketing ploy with Windows 8 was its potential to be a hybrid and all things to all users, it is becoming increasingly clear with Blue that the focus is to gradually move users away from the complexities of the desktop altogether. With future editions of Microsoft Office surely not reliant on running in desktop mode that transition will become even easier and force third-party developers to increasingly make apps rather than programs that must be submitted through the Windows Store (along with 20 per cent of their profits).

Don’t Call It a Service Pack
At this stage whether Windows Blue will update Windows 8 to version 8.1 or 8.5 is unknown, but one thing is certain: they won’t be called ‘Windows 8 Service Pack 1’. Aside from its features, what is arguably even more central to Blue is the change it brings to Microsoft’s software roll outs.

Historically Service Packs have always been irregular, unsexy, unseemly affairs that often served only to unite previously released tweaks and bug fixes under a universal name. With Blue Microsoft is looking to iOS and, in particular, Android as recent incremental updates to Android 4.0 ‘Ice Cream Sandwich’ with 4.1 ‘Jelly Bean’ and 5.0 ‘Key Lime Pie’ have garnered huge excitement. Microsoft wants this for Windows and while it is doubtful the Blue name will stick outside beta, it will signal the beginning of Microsoft’s move to similar regular, feature rich updates. 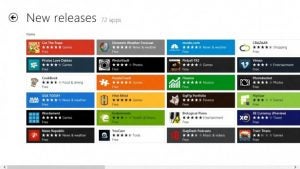 Feeling Blue
All of which may not be enough. What dogs Windows Blue is not so much Blue itself or even some of the controversial paths it suggests Microsoft is beginning to follow, but that Windows 8 came to market half baked. This wasn’t the usual array of glitches or instabilities, more that the OS simply felt unfinished.

Hopping between desktop and start screen modes is jarring, touch-friendly app support has been notably weak and Windows 8 launch hardware was a fractured mess of expensive touchscreen and dull non-touchscreen devices with wildly variable pricing.

Since then app support has started to gain momentum (Windows Store passed 50,000 registered apps this month), there is an increasing amount of 8 excellent Windows 8 hardware and Blue will reduce the schizophrenic nature of jumping between desktop and start screen modes. Then again Windows Vista never shook off the reputation it gained for its inauspicious start and perversely Windows 7 has such a strong reputation many users see no need to upgrade from it.

Bolt from the Blue
All of which means Blue has its work cut out if it is to increase interest levels and bolster sales figures that have been predominantly driven by new PC purchases.

As it slipped behind in mobile, Microsoft devised Windows 8 out of equal parts desperation and inspiration and created a daring operating system that is both lovable and hateable, inspired and illogical, surprising and dumbfounding. Windows Blue will give it greater focus, clarity of vision and some controversy. All are needed for an OS which its creators dreamt would evoke anything but apathy.