Pornography will be blocked from every UK home and across public Wi-Fi services according to plans announced on Monday
by Conservative prime minister David Cameron. Those still wishing to
access pornography will need to speak with their Internet Service
Provider (ISP) to opt back in.

In a speech Mr Cameron said the
move was taken to crack down on child pornography as well as limiting
access to pornography to “protect our children and their innocence.”

In
addition to the block, Mr Cameron said videos streamed online will be
subject to the same restrictions as those sold in shops. Search engines
have until October to implement stronger filters to block access to
illegal content, and police and experts from the Child Exploitation and
Online Protection Centre (CEOP) will have greater powers to trace
illegal content and examine file sharing networks.

The new laws
will come into practice for all new ISP customers by the end of 2013
while existing customers must be contacted by their ISP and asked
whether they wish to use “family-friendly filters” or not.

Since
the announcement supporters and objectors have been in strong voice.
Supporters backing the protection they argue it will give to children
and less technologically aware families. Detractors citing the evils of
censorship, the moral stigma created by opting against the filters, the
shifting of responsibility from good parenting and the hypocrisy of the
government’s funding cuts to CEOP last year.

We have a bigger
complaint: the new laws suggest politicians don’t understand technology.
Consequently – for better or worse – the measures taken to enforce them
will fail. Here are the reasons why: 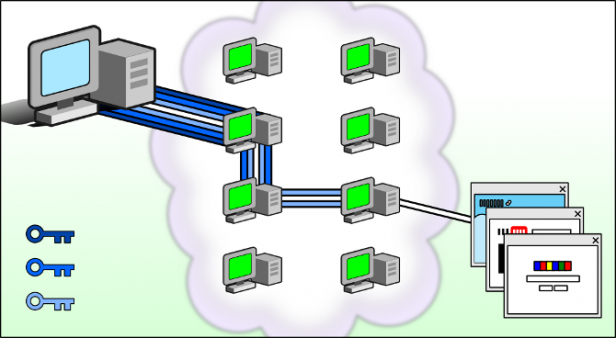 The
subject may be controversial, but we have been here before with another
equally polarising topic: piracy.

Due to legal rulings, ISPs were last year required to block access
to prominent piracy sites and for search engines to filter results.

While
this may dissuade the most casual of pirates, a quick search will
reveal numerous ways to get around these blocks from VPNs (Virtual
Private Networks), DNS patches, web proxies, alternative addresses to
access the sites in question, browser extensions, anonymous browsers like Tor (simplified version of how it works pictured above), smartphone apps and
even via a hack using Google Translate!

The result? In April, illegal
downloads of Game of Thrones broke piracy records.

In short, even effectively deployed filters are easily bypassed whether it be for piracy or pornography.

Reason #2: ISPs are an ineffective police
The
final sentence to Reason #1 is particularly pertinent here because even
though “effectively deployed filters” are easily circumvented, most
ISPs are in no position to effectively deploy them in the first place.

The
prevalence of pornography has fuelled the new laws, but prevalence also
reflects demand and no ISP has the resources – either in manpower or
financial – to keep a lid on it all. “It’s technically not possible,”
said Trefor Davies, chief technology officer at ISP Timico to the
Telegraph. Furthermore, what isn’t blocked rises straight to the top and
most likely stems from the darkest and least well trodden areas of the
Internet.

Equally problematic are the mistakes that will
happen. “Blocking lawful pornography content … will lead to the
blocking of access to legitimate content” argues Nicholas Lansman,
secretary general of ISP industry body ISPA. “It is only effective in
preventing inadvertent access.”

Reason #3: Free software does a job better
Moralists
will argue that taking the responsibility for what children surf away
from parents and placing it on ISPs encourages neglectful parenting.
Whether or not this is true from a technological standpoint the bigger
concern is it will push more effective, free filtering software into the
background.

To their credit much of this software is already supplied by the majority of ISPs including Virgin Media (Virgin Media Security), BT (NetProtect Plus), Sky (McAfee Parental Controls), TalkTalk (HomeSafe) and many more. There are also family filters built into Windows and Mac OS X as well as the majority of smartphone platforms.

In addition, most third-party routers have integrated parental controls these days and Cloud platforms like Linksys Smart WiFi and D-Link’s mydlink
can be controlled from any location with a web browser. Furthermore, all
these services let parents tailor settings to their own preferences,
limit content based on time of day, specific devices and so forth.

By
contrast, the new laws tell families to either block pornographic access
for everyone in the household or grant access to everyone in the
household. It is a blunt instrument that risks giving parents a false
sense of security when better control is already at their fingertips. 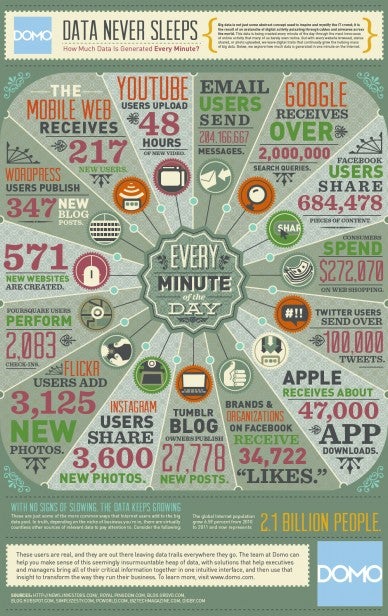 The
secretary general of ISPA has already said the new laws “will lead to
the block of access to legitimate content” and this means a system of
white listing innocent sites must be undertaken.

Where the line is drawn
– soft pornography, lads’ mags, tabloids, lingerie shops, galleries,
social media websites… – is already a problem, but it also favours the
larger sites who will be vetted more quickly.

The concern is
this creates a two tier internet where there is no hope of vetting every
possible website that may sail within touching distance of a ban. How
not? According to Domo
(graphic right) last year there were 48 hours of new YouTube video, 571
new websites, 347 new WordPress blogs, 27,778 new Tublr blogs, 3,600
new Instagram photos and 684,478 new pieces of content uploaded to
Facebook every minute.

As such only broad strokes can possibly
be used with the major corporations getting preferential treatment while
a small online gallery specialising in artistic nudes, for example, may
go out of business.

Net neutrality is the principle that all data on
the internet is treated equally by ISPs and governments. As battered as
it is by search engine rankings and piracy blocks, it cannot remotely
hope to exist under the new pornography laws.

While
minors’ inadvertent access to pornography is deeply concerning, child
pornography is clearly the deeper evil and it is hard to see from a
technological standpoint how the new laws can better control it.

“[Child
pornography is] invariably shared over private networks and not found
by a simple image search,” argues Daniel Foster, founder of web hosts
34SP.com. “History shows us that they will be quicker at keeping this
target moving than law enforcement will be at catching it.”

Where
the new laws may have some success, however, are the greater search
powers given to both CEOP and the police to examine file transfer
networks, but they will likely run into strong opposition on privacy
grounds.

That aside it is hard to see how the majority of the new laws
can successfully address child pornography or children’s access to
pornography and they may in fact do more harm than good.