Eric Schmidt is known for making bold predictions, but they are never bolder than when he talks about television. Despite this his track record isn’t good. Most notably in December 2011 the Google chairman proclaimed that by the summer of 2012, Google TV would be inside the majority of televisions on sale. He wasn’t even close. Undaunted Schmidt was at it against last week saying YouTube has already defeated television. Remarkably he may be a little closer this time…

Billions not millions
Certainly the statistics seem to back him up. In March YouTube surpassed one billion monthly users, that’s roughly one of every two people with an internet connection. Berstein Research also says YouTube ad revenues will rise nearly 40 per cent from $1.3bn in 2012 to $2bn in 2013 and top $15bn “in the next several years”. Meanwhile YouTube is said to be on the verge of announcing a bespoke subscription service to supplement the rental and ad-supported models it already provides.

Typically Schmidt had to take it several stages further. He dismissed YouTube’s one billion monthly users as just the start: “Wait until you get to six or seven billion” he enthused. 7.084bn is the current estimate for the total number of living humans on Earth according to the United States Census Bureau. 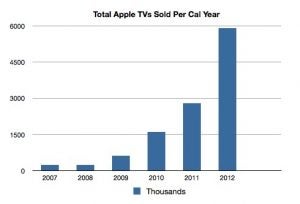 Streaming taking off
But Schmidt has a point and YouTube is just the tip of the iceberg. Amazon Studios, Netflix, iTunes, Hulu and Lovefilm are becoming the big movers and shakers of the video world, with most available on smart TVs and the first two already testing pilots and releasing entire original series online. Even heavyweights in the more mature music streaming sector are becoming interested with Rdio launching Vdio this year and Spotify said to be prepping a video extension of its service.

The popularity of media players only emphasises this point with Apple TV sales having grown exponentially in the last two years and there is a flood of successful rivals including Roku, Western Digital’s WD TV series, Boxee and yes, slowly but surely, Google TV. This is all before any boom the long rumoured Apple television could cause on arrival and the release of the media-centric next generation games consoles, the PlayStation 4 and Xbox 720.

Throw in that even full size laptops are now ditching DVD and Blu-ray drives and the motivation for users to adopt streaming services to replace them puts another nail in the coffin of traditional broadcasters. Broadcasters who last year, in the UK alone, faced a £350m drop in advertising revenue despite the windfalls of Euro 2012 and the London Olympics.

Demanding on-demand
Of course as technology wades into a new sector it is typical to point out how that sector remains belligerent in its determination not to change, but happily broadcasters are bucking the trend.

Their sensible approach has been to give viewers the best of both worlds. Almost every major broadcaster now offers an on-demand ‘catch up’ service and some are even premiering shows on-demand first. BBC iPlayer is the most obvious reference point, but speedy evolution of Sky Go also demonstrates the Murdock empire is prepared for a future beyond fiddly satellite dish installations and digibox wiring.

Infrastructure and licensing
So with youthful pretenders and the established order both moving in the same direction what could possibly stop yet another online revolution? Unfortunately a lot.

Most fundamental is the broadband infrastructure that is needed to support it. Yes speeds may be rising, but capacity is a problem and most connections suffer notable performance reductions during peak hours already. Meanwhile in many countries rural broadband remains in the dark ages and until that is fixed adoption will ultimately stall.

Broadcast media may have its problems, but buffering is not one of them.

Next is licensing. The shift to subscription-based streaming music may have taken a significant bite out of music piracy, but the industries of television and film have done little to show they are ready to be as forward thinking. Music services like Spotify and Rdio work because 90 per cent of all releases are available to them globally so the services compete primarily on quality, not content.

Television and film, however, remain stuck in the dark days of DRM, content exclusives and a globally fragmented release schedule. The law abiding citizen would need to subscribe to a dozen services to get access to all content and have a teleporter handy in order to watch it. These restrictions don’t tempt the pirates and lifting them scares studios. Why? Because studios are still highly profitable and don’t face the crisis that so strongly motivated the music industry. Studios are happy to invest in online alternatives, but they also don’t want to kill a tried and tested revenue model before absolutely necessary.

Change takes time
So for now the iPlayer and Go suffixes will remain firmly in place. Whatever Schmidt says, online video services in general (let alone YouTube in particular) have yet to defeat traditional television and until fundamental infrastructure and licensing changes are made they never will.

That said Schmidt’s excitement is understandable. Online video services are ready and they have every weapon needed to incorporate all that is good about television and reinvent it through a more powerful, interactive, global distribution platform. But getting them the ubiquitous content and broadband infrastructure to support their revolution relies on a great many others.