Microsoft occupies an odd position in the computing landscape. It has firmly embedded roots in both corporate IT and home computing, as well as a growing number of branches into consumer electronics, the web, communications and gaming. It may be too early to call time on the age of the PC but Microsoft clearly recognises the need to grow the consumer side of its business. The problem is, to succeed in that sector requires one thing that is in short supply in Redmond – cool.
This week we learned that, legally, Apple is cooler than Samsung. Or at least, the Apple iPad is cooler than the its supposed rival, the Samsung Galaxy Tab. When it comes to defining cool we usually ask experts like Kate Moss or The Fonz but this is the judgement laid down by the UK High Court as part of the verdict in Apple’s intellectual property case against Samsung. The Galaxy Tabs may look similar to the iPad, said Mr Justice Birss QC but, “They do not have the same understated and extreme simplicity which is possessed by the Apple design. They are not as cool.”
Tough on Samsung (although it has probably saved them a good deal of money) but hard to argue with. Apple products do have an aura of cool about them. It is hard to define, but it is arguably their most saleable feature. Microsoft, Apple’s oldest and most resentful rival, does not have an aura of cool and it is this factor perhaps more than any other that means it’s own would-be iPad rival Surface has a real hill to climb.

Just what is it that makes Apple cool? Partly it is down to its unerring eye for industrial design. Even if you prefer to run Windows instead of OSX or rock an Android phone rather than an iPhone it is hard to deny that the guys in Cupertino make some desirable kit.

An eye for aesthetics isn’t everything, though. Windows Phone 7 has a beautiful, clean design and Surface looks to have taken this to the next level with a simple and refined look that stands up well compared to the best of Apple’s products. Still, that Microsoft logo and the fact that it runs Windows will count against it. Apple, despite being a multi-billion dollar corporation, still manages to feel like the underdog. Its products aren’t for the boring old business people in the 1%, they are for plucky creatives. Cool people. 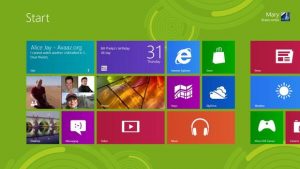 Windows 8 looks great but is it too stigmatised?

Earlier this month a young design student, Andrew Kim, set himself the task of rebranding Microsoft. All of it. Considering Kim is only 21 and that he finished his project in just three days, what he came up with was pretty remarkable.
Kim started by throwing out the Windows logo. Windows has served Microsoft well, but it ties the company to the past. The Windows OS may have changed, but people’s perception of it is lagging behind. In Kim’s words, “The Windows brand is legendary but does not represent a progressive image. It feels outdated and has connotations that aren’t helping Windows Phone and Surface.”

And that’s the crux, really. The real problem here is Windows. Windows 7 is a brilliant product compared to what has gone before and Windows 8 looks like a genuine evolution, if not revolution. It is still Windows. Windows is bad memories of incompatible drivers, uninstall programs that don’t work properly and access rights that stop you doing what you want without offering the protection you need. Windows is rebooting after a major software update, complicated licensing structures and Clippy the paperclip offering to help write your resignation letter.

Windows is sitting behind your desk 9 to 5. Windows isn’t cool. 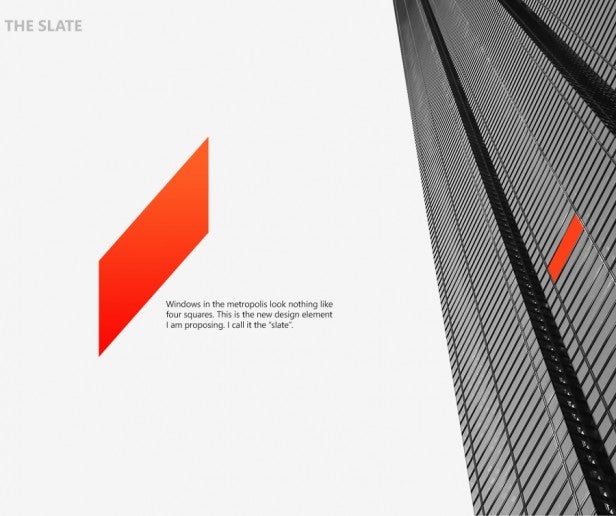 The Slate – A new look logo for Microsoft

Kim opted to create a single unifying logo for all of Microsoft’s main products. The ‘Slate’ is a simple diagonal bar, meant to resemble the window of an office block seen at an acute angle. It looks just enough like the Windows logo to save face, but no more. 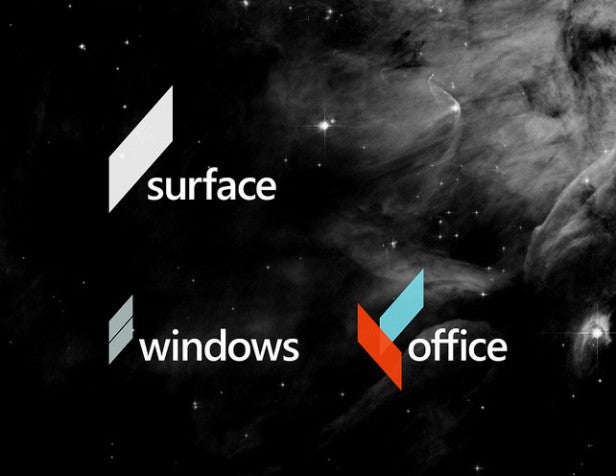 Microsoft probably won’t implement Kim’s ideas. No company of its size (or, to be fair, of Apple’s) could adopt something unsolicited without massaging it and watering it down by committee, but they should listen to what he has to say. By lumbering its growing mobile OS and new tablet arm with Windows’ baggage, it will be doing some great technology a disservice. And that’s just not cool.

Stuart Houghton is a former UK Associate Editor of Kotaku.com and has been writing about technology, games and geeks for over a decade and using technology, playing games and being a geek for much longer. He is also part of the IT team for a major UK charity.