It’s over. Fat ladies, knock-out blows, bells tolling… however you want to phrase it, BlackBerry is dead. In fact for a company so drastically out of touch and so desperate to weather self inflicted wound after self inflicted wound, the only surprise over the last few years is that its demise has been so drawn out.

This declaration may surprise given BlackBerry yesterday found a $4.7 billion buyer in the shape of FairFax Financial Holdings Limited, but in the long term it changes nothing. BlackBerry CEO Thorsten Heins has already performed the mercy killing.

It may have been dressed up as a route to “drive the company toward profitability” but pulling out the consumer space to focus on enterprise is no more likely a cure than a car maker declaring its troubled models were no longer for use on motorways. The coup de gras was then applied in two further steps:

Heins knows BlackBerry is a corpse, FairFax does too – they simply want to see it hung at its best to realise better profits and attract the best offers from bidders or a combination of butchers.

The demise of the underdog

And this is a tragedy because once again in this world of mega corporates, what classes as an underdog these days is going to lose. The company that cared about mobile long before Apple, Google or Samsung, the company who dared to point out Microsoft was doing a rubbish job. BlackBerry gave us the Bold, Curve and SureType, it made phones truly addictive for the first time. We suffered from ‘BlackBerry thumb’ and Webster’s made ‘CrackBerry’ its 2006 new dictionary word of the year.

So if BlackBerry started the revolution what went wrong? It fell for the ingénue’s curse: it failed to realise subsequent revolutions were allowed to happen too. That the Bold and Curve could give way to the iPhone, Android and a slew of Galaxies, that ‘CrackBerry’ addiction was just a better alternative away from permanent cure.

But competition was never BlackBerry’s problem, reaction to it was. 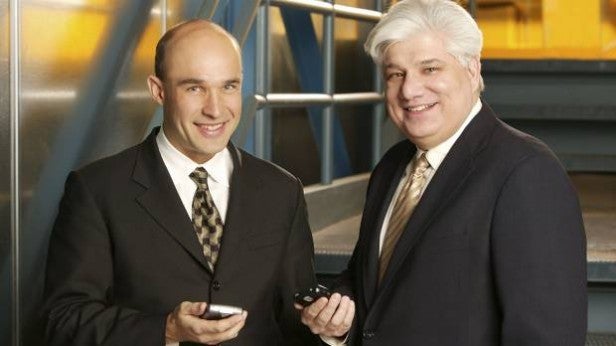 The company famously called the first iPhone “impossible” and then BlackBerry co-CEO Jim Balsillie (left) couldn’t see the problem. “In terms of a sort of a sea-change for BlackBerry, I would think that’s overstating it,” he famously said. Two heads should be better than one, but his fellow CEO Mike Lazaridis (right) then dared anyone to type successfully on a touchscreen, before bragging the iPhone will be “great for BlackBerry!”

Denial eventually passed, but a ropey successor (the Storm) didn’t arrive for 18 months. A virtual beta product (the PlayBook) came 12 months after the iPad and it took until last year for BlackBerry 10 and a truly finger friendly alternative to Android and iOS. The irony was BlackBerry’s smaller size, which had allowed it to be so nimble in the past, was too small to chase behemoths like Apple, Google, Microsoft and Samsung once they got in front.

It is telling that last week Steve Ballmer, newly open in light of his impending retirement, spoke last week of his regret at Microsoft’s “distant third” place in the mobile market. A position BlackBerry would crave as it has “almost no share” in mobile devices, Ballmer complained. For the big boys BlackBerry stopped being relevant a long time ago.

So what now? Technically offers for BlackBerry remain open until 4 November, but FairFax has already outlined plans to take the company off the stock market. It is a wise move that will allow change to happen more quickly and stop the company’s dirty laundry being aired in public. No public buyer could do this as effectively and given FairFax’s historical lack of tech sector investment, limited financial muscle and the folly of BlackBerry’s new business model long term it would be a shock if this were anything but fattening a cow for market.

And yet here is an idea for the romantics: FairFax is doing the dirty work for Nokia. The fine print of Microsoft’s €5.44 billion deal allows the newly cash-rich Finns to sell phones immediately should they be marketed under another brand. It could be the perfect combination of hardware excellence and a return for Nokia to software autonomy.

Then again the more likely reality is BlackBerry is finally out of luck. The FairFax deal is a short term stay of execution in return for handing over the controls. And if equity consortiums are famous for anything, it is for dispassionately clawing apart their investments in order to make one last profit.

Will you miss BlackBerry? What should it have done to avoid its fate, or do you think there’s hope yet? Let us know in the comments.