If you’re anything like us you’ll have ploughed (ahem) through The Witcher 3’s base game and will be eagerly awaiting the first of the game’s expansions; Hearts of Stone. For those people playing on both Xbox One and PS4, though, there’s nothing to do but wait, while people playing on PC can turn to the world of modders to keep their game fresh while they wait.

We’ve dived deep into the modding world to pull out ten of the best mods for you to try; ranging from graphics enhancements and UI changes to quality of life improvements and stuff for the hardcore Witcher fans. 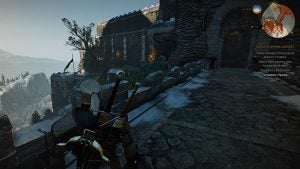 When developers are designing user interfaces they try and cater to everyone; trying to solve problems they think the players will run into and trying to be as helpful as possible. Naturally, though, players encounter issues, annoyances and gripes with the existing UI and immediately look for changes. Friendly HUD allows for massive customisation of the standard HUD; you’ll be able to group various values together and “pin” them as a HUD, for example. So if you only want to see your health bar while you walk around out of combat you can, or you only want to see the minimap so you don’t get lost you can. This is the perfect mod for people who like complete control over over what they see at any time.

This is one of the more self explanatory mods on our list. As you make your way around the world of The Witcher 3 you’ll be opening boxes, picking up plants and looting the corpses of your foes on a regular basis, and having to click on every single item can be a real hassle, not to mention a time waster. This mod allows you to enable autoloot which automatically picks up items when you discover them. This is a life safer for those of you who don’t want to waste time. 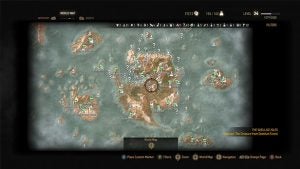 I feel like this is a mod made exclusively for me. When I go to the world map I like to zoom out as far as I can; to really appreciate the journey I’ve been on with Geralt and to see the zones in their full splendour.

If you’ve played The Witcher 3, though, you’ll know that at a certain point while zooming the game swaps to an overview of political powers, rather than a normal geographical map. This mod allows you to zoom right out to enjoy the world of The Witcher 3 as it should be. 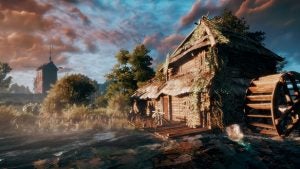 This mod will be controversial for many. When The Witcher 3’s gameplay was originally revealed it was jaw dropping. We saw Geralt on horseback riding through the beautiful world and walking around a stunning city. When the game came out, while still incredible to look at, it lacked some of the sheen that that original reveal had. This mod looks to replicate that original look by tweaking some of the graphics options and pushing PC hardware to more extreme levels.

Like many of the mods in our Top 10, the ‘Fast Travel From Anywhere’ mod is a quality of life improvement. In The Witcher 3 vanilla you have the ability to travel to any previously discovered signpost, which are normally near to towns and villages or other major points of interest. The catch? You can only travel to one of these signposts if you’re already stood at one. This mod removes that crutch, allowing you to travel to any signpost you have discovered from anywhere on the map. 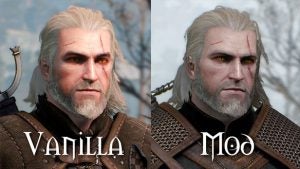 This one is for the Witcher purists out there. For those of you who don’t know The Witcher universe was born in the literary world. Andrzej Sapkowski’s stories are extremely popular and paint a detail world in which Geralt is just but one main character. In the books witchers are feared, idolised and repulsive in equal measure; these mutants and their appearance is because of a cocktail of potions, poisons and herbs given to them over the course of many years.

Geralt in The Witcher game series, though, is a fairly standard looking man (outside of his white hair.) This mod makes his appearance slightly more true to the books.

This is another mod that will definitely depend on how you approach your games, and how you like playing role playing games (RPGs). Typically as you level up in games you like the feeling of becoming strong; overpowering weaker enemies and exerting your strength. It gives you a feeling of validation; all those hours meant something!

This mod, though, means that enemies level up as you do. It removes that feeling of superiority but, on the other hand, means that the game is constantly challenging regardless of your level. 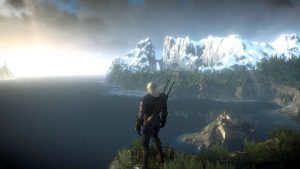 This is another graphical overhaul, though it’s less intense than the E3FX mod I previously listed. This Super Turbo Lighting Mod reworks the lighting across the whole game, while leaving the other graphical elements untouched. Lighting tends to be less graphically intensive on your PC while providing some of the most noticeable boosts to the overall quality of the game. This simple, easy to install mod can make a massive change to how your game looks.

This was the first mod that I installed. Occasionally the HUD of the game can become intrusive as lots of information needs to be given to you at any one time. Your health, mana, quests you’re on, damaged items, maps etc it can become an information overload and, in a game so beautiful as The Witcher 3, sometimes all the clutter on the screen can become distracting. I want to stare off into the sunset, just me, roach and the world – but instead I’m cluttered. This mod removes the fuss, allows you to just have what you need and immerse yourself in the world of the game.

This is one of the smallest mods on our last, but a perfect example of some of the creative thinking and problem solving that the mod community has demonstrated with regards to The Witcher 3. You have a number of spells in the game, or signs, that you can cast on your enemies or on yourself depending on which you choose. Some are defensive, allowing you to cast a shield or a trap, while others allow you to set fire to enemies or push them away. To use these signs, though, you have to swap to your sign options and select the one you want. This simple mod maps each sign to specific key so you can cast them instantly without navigating a small menu.

This is just the tip of the iceberg for The Witcher 3 mods. Over the coming months and years the modding community will expand and the work that they will produce will become more complex and detailed. Let us know what your favourite Witcher 3 mods are in the comments below.

Keep an eye out on TrustedReviews for the latest news for The Witcher 3.