Gone are the days of gigantic disparities between streaming services. None come close to matching the 28-million strong library of iTunes, but all offer comparable figures, and have deals with all the major labels.

Pure Music is slightly hamstrung by its integration of a full “On-Demand” music store, though, as plenty of new (and often not that new) albums are blocked for streaming unless you’ve bought the tunes from Pure’s full-on music store. In our testing, it seemed to have the worst streaming library – the tracks were there, but at times you’ll only have access to short previews of them. Pure costs for albums vary, generally between £5 and £8, while tracks are 99p.

We encountered “greyed out” albums in all the services, but this is almost universally down to the record labels rather than the services themselves. It’s just something you have to accept with legit streaming services like these.

However, while the numbers may sound similar, there are plenty of odd disparities seen when actually searching: 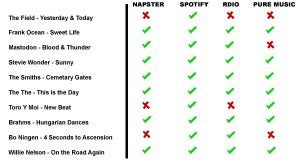 As this quick cross-genre test shows, Spotify seems to have the most complete music collection.

Offline Mode
Spotify – up to 3,333 tracks each on three computers or mobiles
Napster – unlimited, up to 3 mobiles, desktop app required for use on computer
Rdio – unlimited, only for mobiles
Pure Music – no offline, but app gives access to iPhone music library and internet radio

What happens if you lose connection, though? The Pure Lounge app lets you buy music outright and offers access to your locally stores music collection, while the others let you download tracks for use within their respective apps. They’re all DRM’d up to the eyeballs, though, so don’t expect to access them outside the app or once you’ve stopped subscribing to the service.

Spotify has set a somewhat arbitrary (but reasonably reasonable) limit of 3,333 tracks to be stored on up to three mobile phones. Napster doesn’t detail any offline limit, and lets you authorise three mobile phones and three computers to listen to these tracks – although no authorisation is needed when you’re just using the web interface.

Rdio has slightly more limited offline skills. It lets you sync tracks to mobile for offline listening, but seemingly doesn’t let you do the same on a computer.

Napster lets you store offline tracks on your mobile phone or computer and doesn’t mention any particular limit for tracks, saying “You can save as many tracks and albums as you have storage for.” Neat-o.

Pure Music has gotten a bit of a pasting so far. Its apps aren’t as good, its library blocks albums you can play in other services and sound quality isn’t great. But we can forgive a lot of these issues because the service costs half the price of its rivals.

For £4.99 a month, you can stream all day long from a mobile phone or computer browser. The others do offer £5-a-month options, but these universally limit you to streaming with a computer rather than letting you use a mobile device too.

If you’re out to save money, the price difference single-handedly makes Pure Music worth considering. Able to afford £10 a month? Spotify offers the best sound quality options, and its relatively immense popularity means Spotify playlists are much more common than those of any other rival.

However, if you skip between computers a lot, or perhaps aren’t able to install apps on your work PC, having a browser interface to fall back on may make Rdio and Napster more attractive. 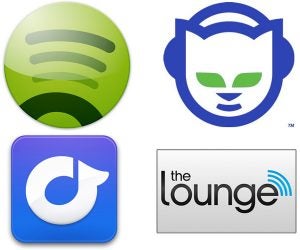 Other than the vanilla but extremely capable Rdio, each of these streaming services have something particular to recommend within them. Spotify offers the best music catalogue according to our searches, and also brings the best spread of streaming quality options. For music junkies, Spotify is still the way to go.

However, the draw of the extra editorial bells and whistles of the Napster service shouldn’t be underrated. Being able to get a little context on each artist is handy when you’re on the hunt for new music – and we were impressed by the quality of the insight on offer.

Last of all, while Pure Music can’t match its rivals in terms of the quality of its execution or the quality of the music stream itself, that it is half the price makes it a worthy choice for those who want a backup solution to an existing music library. Rather than a wholesale replacement for one.