As it’s Father’s Day this weekend, we thought we’d trawl through our review archive and pick out some of the finest pieces of tech that are perfect for dear old Dad.

Whether your budget is under £50 or over £100, we’ve got something that’ll fit the bill for Father’s Day. From fitness bands and headphones to streaming sticks and smoothie makers, this is our Father’s Day 2015 gift guide.

Our current favourite mini streamer, the Fire TV Stick manages to cram a whole load of power, plenty of content and a fantastic user-interface into a body that’s barely bigger than a USB thumb-drive. It also comes in at a not-too-wallet-busting price of £35, so you can get your dad a couple of month’s worth of Netflix (or Amazon Prime Instant Video) to go along with it. 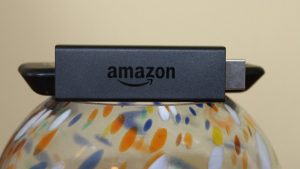 Basically, it’s the full-fat Fire TV shrunk down to Chromecast- and Roku-competing size. It’s much better than both of those, too – with double the RAM, a dual-core processor, 8GB of storage and a much cleaner, sleeker interface. It also comes with a very impressive remote and there’s a companion app that possesses some voice-control smarts. As is to be expected, there’s a definite bias towards Amazon’s own Prime content, but apps for Netflix, iPlayer and YouTube are all available.

Finding an awesome-sounding pair of headphones for less than £50 is tough, but we think we’ve done it. Granted, your dad might not initially be quite into the slightly blingy design – there is a black model available that’s more subtle than the bright-blue version we’ve been using – but once he’s put them on, turned up the tunes and can really appreciate that balanced, detailed sound we know he’ll be won over. 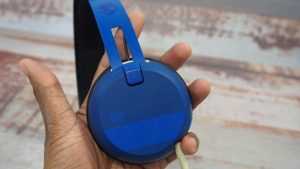 Plus, they’re comfortable, with soft earpads and a light frame that’s covered in a meshy material. SkullCandy’s TapTech feature makes jumping from track to track as easy as tapping the earcup a couple of times, and there’s a microphone tucked in as well.

Buying the chap who raised you a simple bedside lamp for Father’s Day might seem a tad odd, that is until you realise that this is far from your average light. In fact, tucked away in the base is a Qi-enabled charger that’ll juice up compatible smartphones without the need for extra wires. 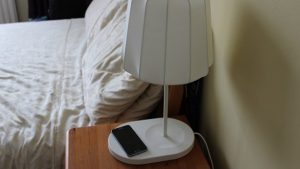 If your dad uses a Samsung Galaxy S6, S6 Edge or Nexus 6 he can just drop the phone on the base before he dozes off. If he’s an iPhone man or totes a non-Qi enabled device there are cases available that will make them compatible. An extra USB port is great for additional devices, maybe a camera or Kindle, and its minimal design means it shouldn’t look out of place.

For this one, we thought we’d give you a choice – depending on your budget. For the more price-conscious among you, the Kenwood Sport 2Go is a compact, yet surprisingly powerful, smoothie maker that’ll churn ice and fruit with ease. Two sports bottles come in the package, cutting down on the mess, and the machine itself has varying power settings and pulse option. Perfect, if you’re not sure how Dad would react to replacing his usual breakfast with a kale, honey, avocado and lime smoothie. 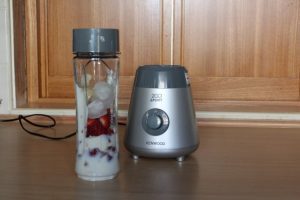 If he’s seriously into his smoothie-making though, the NutriBullet is the king and that extra cost does bring with it a fantastic product. It’s powerful and blitzing up fruit and veggies is no trouble. It’s ridiculously simple to use: just attach the plastic cup full of ingredients, twist and whizz.

Some might think giving your old man a fitness tracker for Father’s Day is akin to signing him up for the local gym and driving him there yourself. We, on the other hand, think it’s a great idea. 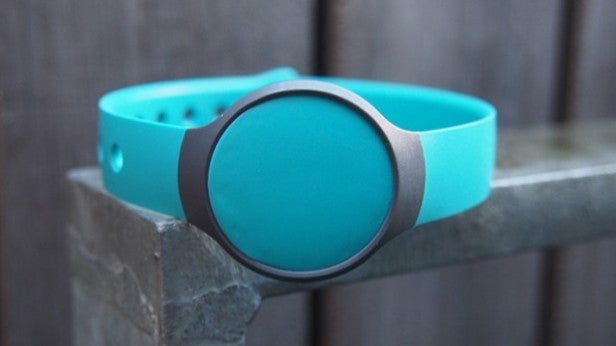 Especially when they’re now so affordable. The pocketable Flash is a cheaper, more rugged version of Misfit’s Shine, but it still packs all the tracking smarts. Your dad will get accurate readings of his daily step count, calories burned and how many hours of kip he manages each night. Plus, he won’t need to worry about charging it every week, as the internal battery is good for around six months.

Another multi-choice option here, depending on how much cash you’ve set aside for Father’s Day this year. Both the Withings Activité and the Activité Pop are fitness trackers disguised as swish, analogue watches. Along with telling the time, both wearables have a separate dial that will show daily steps and then beam that data back to the smartphone companion app. The real difference between the pair is the build-quality and, as a result, the price.

The Swiss-made Activité is the, pardon the pun, daddy of the duo. It’s a premium timepiece, topped with sapphire glass and constructed from a water-resistant stainless steel alloy. It also has the best strap, in the form of a soft-grain Barenia leather version, we’ve ever seen in a ‘smartwatch’. But, it’s pricey.

That’s where the Pop comes in. The much more affordable version ditches the high-end materials, so the leather strap is replaced with a sportier silicon version, but keeps the overall sleek look. It has all the same tracking smarts, and lasts for eight months without needing a fresh battery.

Buy the Withings Activité now for £320

While more affordable smartphones are getting better all the time, none of them can quite match up to the sheer amount of bang for your buck you get with the Moto G from Motorola. Aside from the sleek, Moto X-esque design, the G boats a 5-inch 720p display and a clean version of Android 5.0 Lollipop.

Everything is powered by a Snapdragon 400 processor, which packs plenty of grunt and will ensure Dad doesn’t suffer any slow-down when he’s browsing the web or playing the odd round of Real Racing 3. Snapper-wise you’re looking at an 8-megapixel version on the back, paired with a 2MP selfie shooter on the front.

While there are many e-readers on the market, the Amazon Kindle Voyage stands out as being one of, if not the best. One for the dads who prefer the finer things in life, the Voyage boasts a crisp 300 pixels-per-inch display, natural front lighting for night-time reading and the return of hardware page-turning buttons.

It is a little on the pricey side, though, coming in at £169.99, so if you’re not sure whether your dad will ditch the paperback book for a technological upgrade it might be worth having a look at the Kindle Paperwhite (£109.99) or Kobo’s Touch (£79.99). There’s 4GB of internal storage – that’s enough for thousands of books – access to Amazon’s massive book store, and a battery that will last six weeks.