The GF6 feels comfortable and well balanced in the hand, while a profiled handgrip sits on the front of the camera and allows for a secure hold in general operation.

While it might not be as solidly built as some of the other cameras on test – namely the E-PL5 and EOS M – it’s finished to a good standard and as a result boasts a feel of real quality. 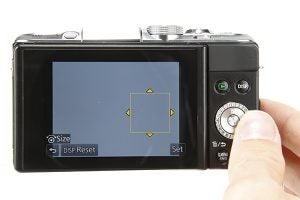 Much like the E-PL5, the GF6 benefits from a wide range of buttons around the cameras body that offer quick access to all of the camera’s main shooting options and functionality.

The buttons themselves are noticeably larger than those found on the E-PL5, and as a result are much easier to operate. It’s also worth noting that the vari-angle screen sits flush to the rear of the camera, as opposed to some of the others in the group that irritate by protruding slightly.

In terms of performance, the GF6 impresses with fast operational speeds across the board. The camera is the fastest out of the group to power up, with it ready to take a shot in under a second from being dormant.

It also boasts some lightning fast AF speeds, along with generally impressive operational speeds. The touchscreen is particularly responsive, and that combined with the touch AF system make it a pleasure to use.

It also manages to capture nearly 40 JPEG files at its continuous shooting rate of 4.2fps, while its 330 shot battery life is certainly not to be sniffed at. 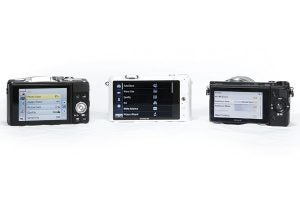 Although the NX2000 certainly has a feature-packed specification, the general design and build quality is something of a disappointment.

The camera body boasts an evident plastic finish, as does the kit lens, and as a result the camera lacks the robustness of many of the other cameras in the group.

One nice feature of the camera’s design is the extensive hand grip, which allows for a firm and secure hold of the camera even with some of the larger NX lenses attached. 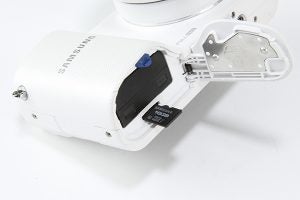 As the extensive touchscreen offers access to most of the camera’s main functionality, the body is sparsely populated with buttons, and as a result most of the operation must be undertaken through the screen.

It’s also worth noting that the NX2000 utilises Micro SD cards as opposed the standard SD cards, so if you don’t have one of these in your kitbag you’ll incur an extra expense.

The general level of performance is decent with the NX2000, although there are areas in which it suffers.

The area where it disappoints is its continuous shooting rate and its write speed. While the buffer capacity of four Raw files or 14 JPEGs is reasonable, unfortunately the Samsung NX2000 has crippling slow write times. This could be in some part due to the implementation of Micro SD cards, but whatever the cause it’s a major disappointment.

The final camera in our sextet is the Sony NEX-5R. The camera is solidly built enough, although it does feel a bit more plasticky than some of the other more robust models on test.

The lens mount is positioned slightly off-centre, and as a result the body can feel somewhat unstable with a heavier lens attached or when trying to shoot one-handed.

To off-set this, the NEX-5R features a deep handgrip around which you can get a real secure hold, and this certainly benefits the security of the camera in the hand while shooting. 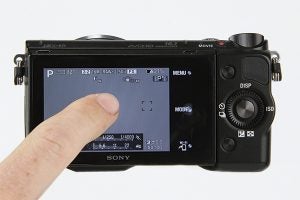 The NEX-5R’s menu system isn’t the easiest or fastest to navigate, although it does benefit from being broken down in to several categories encompassing most of the camera’s main shooting controls.

It isn’t the fastest to power up, but it’s no particular slouch at just over two seconds. What is disappointing is the NEX-5R’s touch screen performance. It’s not the most responsive, and certainly less responsive than some of the other cameras in the group.

The AF performance is another area which disappoints somewhat, and even in good lighting conditions it’s slower than the rest of the group in this area.

In terms of continuous shooting, the NEX-5R manages to shoot some 12 JPEGs or 10 Raw files before the buffer fills, although it does do so at the quoted rate of 10fps.