With a line up of big name DJs, a massive library of tracks and a host of exclusives, could this be the first day of a bright new future for radio? Our sceptical U.S. reporter went ears-on for a whole day to find out.

I excitedly downloaded iOS 8.4 as soon as it became available on Tuesday. The 208MB file necessary to bring Apple Music into play was on my phone within a couple of minutes and installed within five; just in time for the promised debut broadcast of Beats 1.

After hitting play, I was greeted with a nice bit of Brian Eno with Zane Lowe chatting with some dude called Jase over the top. I soon realised this wasn’t a yoga class playlist, but testing prior to going on air. It seemed a little weird we’d get this rather than a placeholder, but no big deal.

“Alright man, we gotta kick this thing off at some point. We’ve thought about the first song to kick off this era. One song all of us coming back to us…” 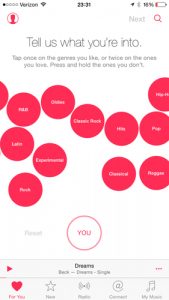 Enter City by Spring King, a Manchester band I’d never heard of. Jangly guitars, Arctic Monkeys style vocals, it was all very BBC 6 Music. I didn’t like the song, so my first instinct was to down vote it, a la Spotify or Pandora. Alas there was no such option here, only a chance to tap a heart to show love and better inform recommendations throughout Apple Music.

Lowe was pretty pumped, obviously chuffed that his risk and hard work was coming to fruition.

“That’s exactly the kind of record we needed to kick things off,” he beamed. “It’s not about fanfare. It’s about quality and consistency. We’re Beats 1, we’re worldwide and from now on we’re always on.”

The “worldwide” only sounded a teensy bit sounded like the Prestige Worldwide (…wide, wide, wide) bit from Step Brothers, but not to worry.

Next up was Beck, Jamie XX, Skepta (who Lowe annoyingly raps along with) and then AC/DC’s For Those About To Rock, marking the first time the Aussies have made their library available for streaming (Spotify has it too from today). Some Hudson Mohawke wrapped up a very eclectic, but not entirely surprising first half an hour.

Between songs, the former Radio 1 DJ plugged forthcoming content and explained how users will be able to find the schedule for their locale by looking online. The next few hours are listed in-app, but the full schedule definitely feels like something that should accessible without browsing to a Tumblr page.

Half an hour in, it was time for the World Record; a single track that will be played at half past every hour throughout the world (Beats 1 launched in 100 countries on day 1), each day. The first such track was the new and exclusive Pharrell Williams track – Freedom. Not a bad way to kick things off.

Lowe says “it was given out of the kindness of [Pharrell’s] heart,” (which seems dubious), while plugging Pharrell’s The Pharmacy radio show, another important Beats 1 exclusive. To celebrate, Freedom was played twice in a row. 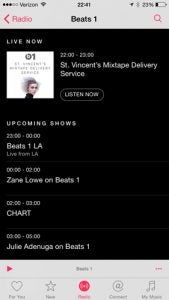 Later in the hour came another regular feature, the World First, which aims to introduces a new artist (Galant’s – Weight in Gold).

By 13:17 I’d also heard a (heavily censored) track from Dr. Dre’s The Chronic, the 1992 solo album available for the first time digitally within Apple Music.

Hip and trendy favourites like Courtney Barrett and Royal Blood followed within Lowe’s show but he’d be off the air by the time first Taylor Swift song arrived on the scene at 14:30 with Bad Blood. That was later than expected considering the tumultuous events of the last two weeks.

By 15:35, I’ve heard Pharrell’s song five times. It could be worse, I suppose, at least it’s a break from the unfortunate selection of tracks Julie Adenuga has dubbed “the sound of the UK.”  In nearly 90 minutes, Julie didn’t seem to realise that national sound could also involve guitars and actual musical instruments, rather than laptops and Pro Tools. Eventually Foals came along to break the streak, but the session was one-dimensional and unrepresentative to say the least.

By now, I’d been listening to Beats 1 for seven hours and had heard Phrarrell’s admittedly pleasant and inoffensive new track eight times. Things were on the up though. Ebro Darden’s New York-centric two-hour slot was probably the highlight of the day in terms of content and presenting style; with a nice mix of new and old tracks from the five boroughs. There was even a little Jay-Z just to show there’s no beef with the Tidal CEO. 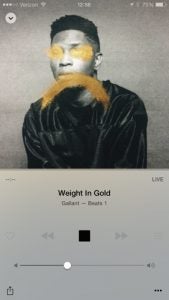 The NYC mix really put the London show to shame as, unlike Adenuga, Darden had the common decency to play something outside of his own wheelhouse.

The night’s listening continued with the St Vincent’s Mixtape Delivery Service show, which was the station’s first piece of artist-led programming, something it’ll come to pride itself on with Pharrell, Dre and Sir Elton also signed on.

Darden had been responding to requests on Twitter during his show, but St Vincent brought listeners on the air to request their own mixtapes. This saw a little Bowie, The Pet Shop Boys and the Pointer Sisters enter proceedings.

Accepting requests seems like a pretty big deal as it gives Beats 1 that ‘proper radio’ feel and allows listeners to feel like they’re part of something.

I rounded off almost 12 hours of listening shortly before midnight, with the Beats from LA show. Dr. Dre’s Nuthin’ but a “G” Thang. That seemed apt.

Zane’s show was repeated at midnight before a Chart show at 2am. That sounds like it’d be interesting, but I credit myself for getting this far. Maybe tomorrow… 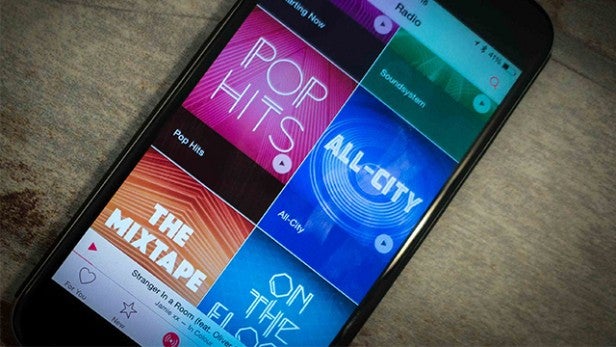 If I remove myself from my own musical tastes (and forget the Adenuga show, which was probably the longest two hours of my life), I can safely say Beats Music is off to a great start.

Apple Music may be a latecomer to the streaming party, but Beats 1 – the first round-the-clock, streaming-only radio station – is unquestionably a pioneer in the radio streaming sector. And, on this early evidence, it’s very easy to see how this bold venture could indeed shape the future of radio.

Beats 1 brings the all-important live, linear ‘anything can happen’ nature of broadcast radio that keeps us tuning in and combines it with engaging, popular and recognisable presenters and, of course, instant interactivity via social media.

Beats 1 has great promise and it’s already clear this is the otherwise uninspiring Apple Music’s ace in the hole when it comes to the fight against Spotify. In the long history of radio, this was certainly a landmark day.

Disclaimer: I didn’t expect to enjoy listening to Beats 1 and in the main I didn’t. However, my personal distaste for the musical selection and some of DJs is irrelevant in terms of judging my time with the service impartially and, as much as possible, without sarcasm. Horses for courses, each to their own and all that.

Do you agree with Chris on the Beats 1 Radio launch? Let us know in the comments section below.