Asus arguably stole Computex 2016 with a string of stand-out product announcements, and chief among them was the unveiling of the Asus ZenBook 3.

Here is an unbelievably slim and light 12-inch laptop with the processing power to run even advanced tasks with relative ease.

Asus CEO Jonney Shih spent considerable time during the ZenBook 3 announcement highlighting how it outshines the latest MacBook. But we reckon it could also take the fight to another portable powerhouse – the Surface Pro 4.

Yes, you could argue that the Asus Transformer 3 Pro is more of a direct 2-in-1 competitor, but the comparison is an interesting one nonetheless.

The Microsoft Surface Pro 4 has a phenomenal 12.3-inch touchscreen display with a super-sharp 2736 x 1824 pixel resolution.

Of course, there’s much more to a screen’s quality than just its sharpness. When we went hands-on with (likely) a pre-production sample, we noted that it was a decent performer in terms of colour vibrancy, though we’ll have to spend more time with the device before judging it in full. 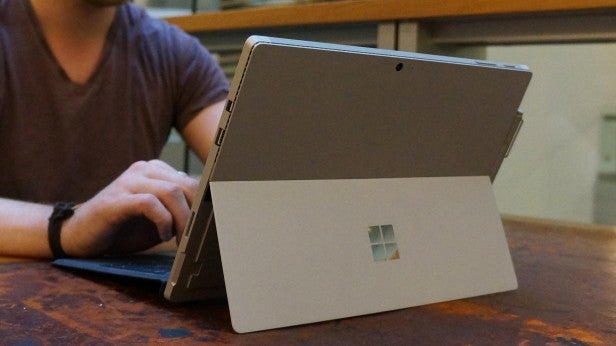 Surface Pro 4 is both smaller and bulkier

It might confuse you to learn that the Surface Pro 4 is slimmer and lighter then the ZenBook 3, but also thicker and heavier. What gives?

While the Asus ZenBook 3 appears to be the heavier of the two at first glance – it weighs 910g versus 786g – the latter figure doesn’t take into account the Surface Pro 4’s optional Type Cover. Which, let’s face it, really isn’t optional at all.

Add Microsoft’s keyboard-case peripheral, and you’re looking at a combined weight of well over 1kg.

It’s a similar story when it comes to thickness. Taken on its own, the 8.4mm-thick Surface Pro 4 is a fair bit thinner than the 11.9mm Asus machine. But add the 4.65mm-thick Type Cover to the Microsoft hybrid and it’s a different story.

Related: All the highlights from Computex 2016 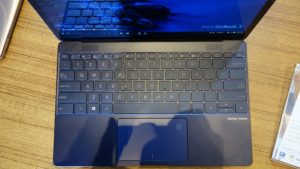 ZenBook 3 looks to be the typing champ

Talking of that Type Cover, its unorthodox presence (or not, as the case may be) means the Asus laptop wins as a pure typing machine.

The ZenBook 3 come with a fixed keyboard that can be used comfortably on your lap (the Surface is more for tables), yet it also manages to achieve a (relatively) generous 0.8mm of travel for each key.

The latest Type Cover, meanwhile, manages to offer 1.3mm of travel, which should theoretically make for a more natural typing experience. But again, there’s the fact that it’s not a traditional, fixed platform from which to type. We’ll have to spend a bit more time with the Asus machine to be sure it’s superior in this respect, but it’s looking good.

Of course, Surface owners have the Surface Pen. Microsoft’s stylus ships with every device, and adds a whole new level of note-taking/scribbling interactivity that the ZenBook 3 lacks.

It’s a topsy-turvy world we’re living in, one in which a hybrid like the Surface Pro has better connectivity options than a full-fledged laptop.

The Surface Pro 4 is a very well connected device, with a USB 3.0 port, a microSD card reader, and a MiniDisplay port. All the ZenBook 3 has, by contrast, is a solitary USB Type-C port.

Yes, it’s flexible and multi-functional, but you’ll need a bunch of adapters to mimic the Surface Pro’s functionality. 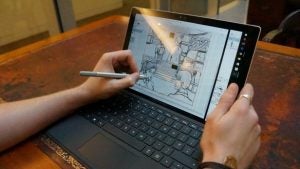 While the two devices take very different approaches in most respects, they’re fundamentally similar on the performance front.

Both offer the latest Intel Core i5 and i7 CPUs, though the Surface Pro 4 also gives the option of a low-end Intel m3 processor.

In addition, both devices pair these processors with up to 16GB of RAM, and both can be kitted out with a 1TB SSD.

With similar internal components and not much to separate the two devices on the size front, we’re not entirely surprised to learn that Asus is quoting nine hours of battery life – just like the Surface Pro 4.

We’re not sure exactly how big that ZenBook 3 battery is, but we’re guessing it’s smaller than the Surface Pro 4’s 5,087 mAh unit. That might explain why it shares the same stamina level despite having a less demanding display.

The Surface Pro 4 ranges from £750 to £1,799 depending on the spec, while the Asus ZenBook 3 will start at £799 and likely run up to a similar top-end price for the very best model.

It could be a straight shoot-out for your money, then. 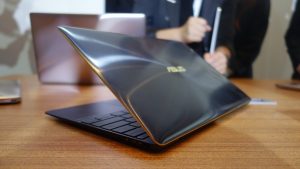 It’s very early days, but the Asus ZenBook 3 looks like it could be a new contender for the premium lightweight laptop crown. We know it’s going to give the MacBook a bloody nose, at least on paper, but it could give Microsoft’s Windows 10 flagship something to think about too.

Which you prefer could well come down to the type of work (or play) you want to do. As a traditional work machine that’s focused on accurate typing, the ZenBook 3 could well prove to be preferable.

Meanwhile the Surface Pro 4’s greater flexibility could make it a better bet for casual or creative usage.

We’ll know for sure when the Asus ZenBook 3 hits shops this August.

Are you tempted by the ZenBook 3 or does the Surface Pro 4 reign supreme? Let us know in the comments below.