Assassin’s Creed Origins is easily the best time we’ve had with the series in years. Exploring the sprawling desert sands of Ancient Egypt is superb, with so many things to discover while you’re sneaking about murdering baddies.

Of course, you’ll want to know where to find the finest weapons, treasures, and items, as well as the best ways of using them. Trusted Reviews has put together an Assassin’s Creed Origins guide to help make the land of Ancient Egypt become your own personal playground.

Combat has changed a lot in Origins compared to previous games, now more akin to something like Dark Souls or Batman’s Arkham series. Your primary attack is performed with the shoulder buttons, meaning it’s all about concise timing and ensuring your foes never have the upper hand.

Time your dodges perfectly. This means enemies will leave themselves open to attack, allowing you to down them with a few quick strikes. Always remember to use Shield Break too. Many foes will take damage on impact while simultaneously remaining stunned for few precious seconds. 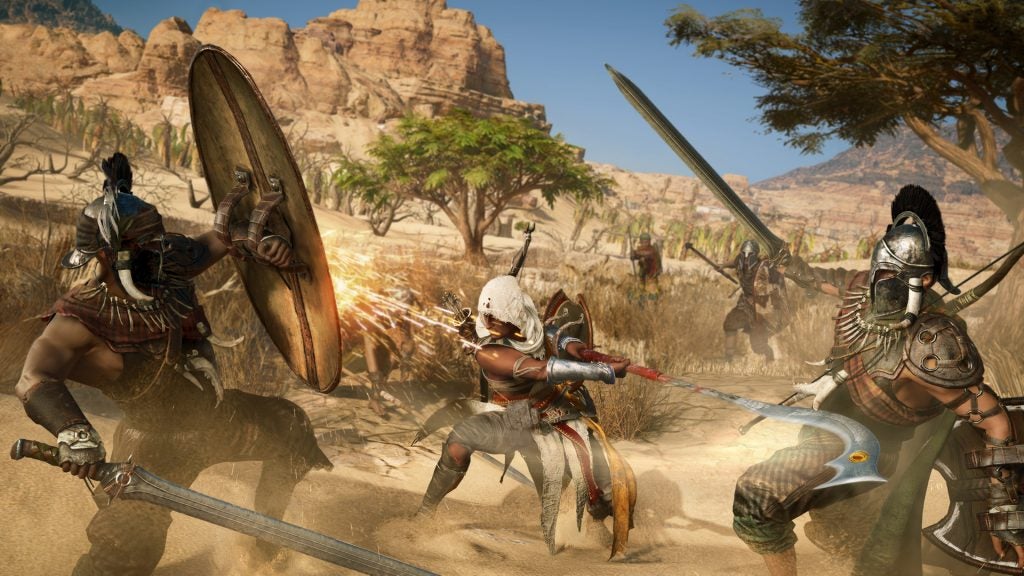 Experiment with weapons in the opening hours. Origins is very kind with the loot it provides, giving a selection of murderous tools before releasing you into the wider world. This is the perfect opportunity to pick your poison, deciding whether a light or heavy arsenal fits your style.

Also, make sure to upgrade your gear! You can do this by visiting vendors located in cities and towns. Not only does it increase your stats, but also gives you the upper hand in battle before a more powerful instrument comes along. Looting dead enemies may also result in a surprise drop or two.

Be careful when taking on multiple enemies! Learn to control crowds as increasing numbers of guards surround you. Try and focus on larger foes first, as they’re capable of dealing massive amounts of damage. Ranged enemies will also pick you off from a distance, so ensure they’re defeated ahead of major battles.

Ancient Egypt is absolutely huge, and figuring out the perfect way to see its greatest sights can be a little overwhelming. Synchronisation Points will be your first port of call in each new area. Not only are they incredibly fun to climb, they provide Bayek’s map with additional information on surrounding activities and outposts.

Senu, your eagle companion, is essential to surveying the map in advance of invading outposts or embarking on a treacherous mission. Marking guards, treasure, and alarms is a great way to get the drop on enemies or scurrying in without a trace. Further upgrades also allow Senu to stun and passively attack guards who spot you. 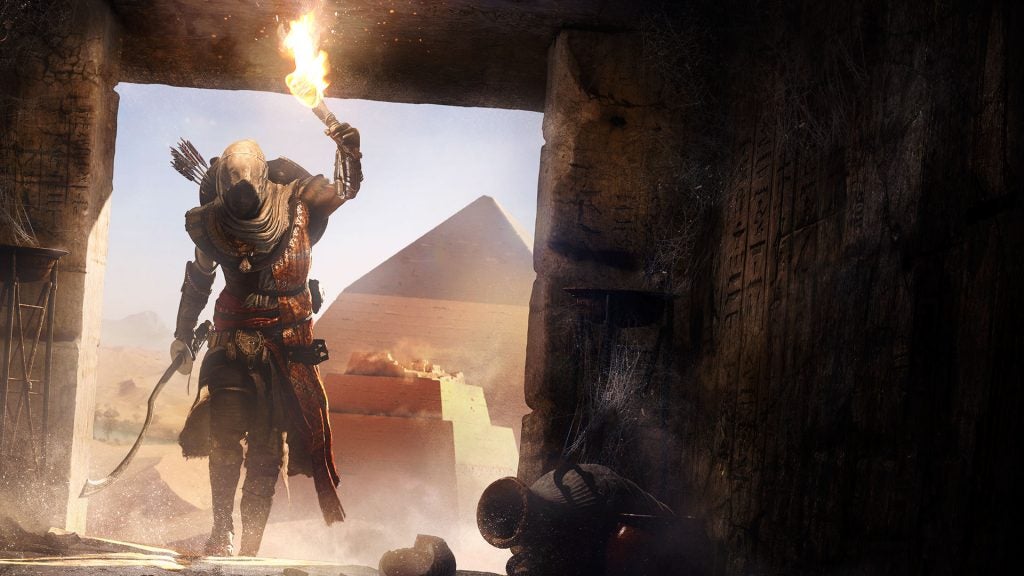 Don’t forget about your Mount! A quick press of a button will bring your buddy to your location regardless of where you are in the game world. It won’t work in enemy territory, so be aware of that when trying to escape a hairy situation. New Mounts can be purchased from merchants or gained from specific quests, so keep an eye out for those too.

It’s possible to play through the majority of Bayek’s adventure with his head in the bushes, popping out to occasionally dispatch a clueless patrol. Stealth in Assassin’s Creed Origins is very similar to previous entries, meaning it’s all about hiding in plain sight and dispatching enemies one by one.

Stay in the bushes, using whistles to lure enemies from their posts. You’ll only ever attract one at a time, so don’t worry about being overwhelmed when undetected. The rooftops are also precious platforms for sleuthing about. Guards will often reside on watchtowers and balconies so wipe them out before taking to the skies.

You’ll eventually unlock sleeping darts and firebombs, the former can leave foes vulnerable to a quick death while taking a nap. Fire Bombs are a little more obvious, but lobbing them at pots of oil will set enemies ablaze without knowledge of your presence.

Origins has a fairly traditional leveling system. Bayek gains upgrade points with each new level and by discovering ancient tablets in tombs across Ancient Egypt. These can be applied to a tech tree that spreads in three directions: attack, stealth and ranged abilities

Try and diversify where points are spent, as each direction features skills that are essential to being an effective assassin. For example, some upgrades will make it easier to purchase crafting materials from merchants while others will let you transition into slow-motion when leaping off a horse with your bow. 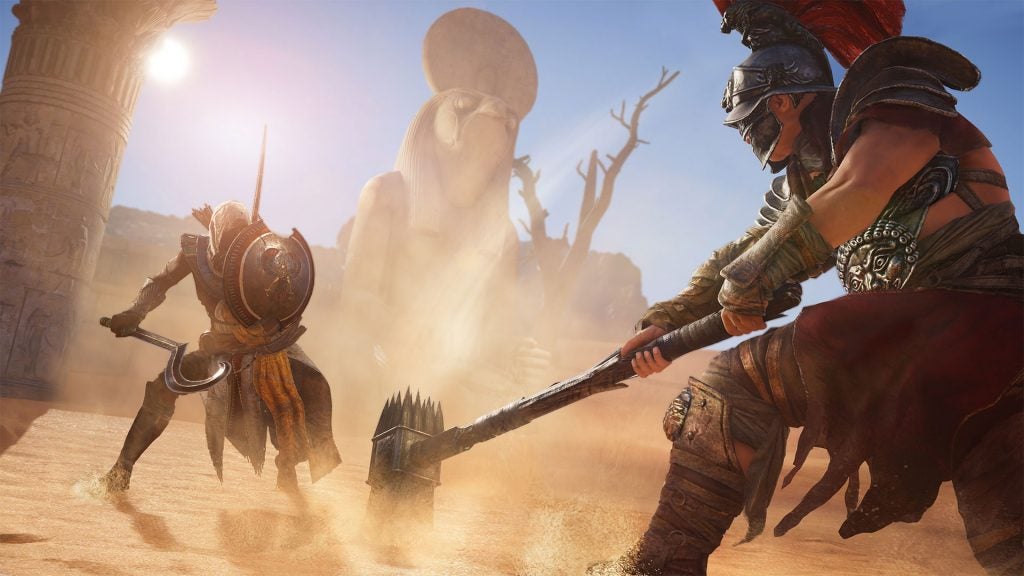 Ancient Egypt is absolutely packed with interesting secrets to discover, but you’ll have to do some legwork to discover them all. The best way of procuring them is first by heading to a synchronisation point before snapping up every new mark of interest in your local area.

Landmark locations such as pyramids and temples will almost always be hiding something valuable, whether it be an Ancient Tablet or Papyrus Puzzle. The majority of these will be marked on your map automatically, but some will require a bit of outside-the-box thinking to reap their rewards.

Experience is gained by nearly everything you do in Origins. Whether it be killing an enemy, climbing a tower or hunting animals, you’re always being rewarded. But what are the quickest and most effective ways to grind XP?

Taking high-level outposts is a great way to accumulate experience, as you acquire it through stealth, combat and completing each location objective. This quickly builds and is a brilliant way to level up in-between quests.

You can even complete them while traveling to different missions, netting a cheeky helping of experience without much effort. Side quests, depending on length and difficulty, will result in 2000 – 4000 XP and potentially a rare weapon or mount. Be sure to check before accepting