Assassin’s Creed: Origins Discovery Tour is a unique addition to the long-running climb-and-kill simulator – a free bolt-on for the original game in which you explore the world of Ancient Egypt via museum-style tours. And you absolutely do not kill anyone, at all.

You can still climb, though.

It’s a surprisingly large addition to the Origins package, featuring dozens of fully voiced (and localised) tours covering topics ranging from the pyramids and their construction, the presence of the Romans in the region, even the kinds of dance people of the times enjoyed.

It’s straight-faced, educational, strips out all of the fantastical elements of Assassin’s Creed and – genuinely – is a breath of fresh air. Jean Guesdon, creative director of Assassin’s Creed: Origins and Discovery Tour, is very enthusiastic about this pet project of his and a few members of the Ubisoft Montreal development team: “It’s something that we were dreaming about for a long time,” he says, “actually the first idea came from Assassin’s Creed II, where we were dreaming about a tourist mode. In the end we couldn’t do it, so it ended up in the in-game encyclopaedia, which was a good first step to actually bring some historical knowledge to players.

“This time I felt like it was the perfect moment – the tenth anniversary of the franchise. A well-mastered process to build the worlds and this wonderful setting made it the perfect match to bring it to life and to add this kind of encyclopaedia 2.0, basically.”

Surprisingly, the move to an educational add-on for a series based almost entirely around murder wasn’t a difficult sell to Ubisoft’s top brass, with CEO Yves Guillemot a big fan of an approach that enriches players’ lives.

“I had to discuss a bit with the producer, when it comes to the budget,” Guesdon laughs, “But I felt that it was the perfect addition for the game… It’s not something that I was pulling out of the hat as a surprise. I mean, the importance of this story for the franchise has been here since the beginning. So it was kind of a natural evolution. It was a bit of discussion but nothing too serious. I mean, people understood the idea and supported it.” 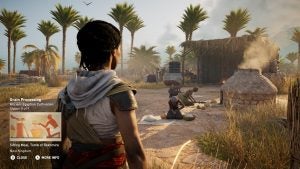 While the ground level change of removing combat was straightforward enough, Discovery Tour wasn’t just a case of doing that and pumping it out through the door. In fact, as Guesdon explains, it was a more difficult task than the team expected: “There’s a lot of additional content. All these tours, this audio, the menus, the images were the hard parts, basically, because it was about creating something new. A new experience, bringing new content. How do we display that? What is the right format?

“[Discovery Tour set out with a different purpose], but keeping the interactivity, keeping the movement, keeping the climbing, the parkour, the everything, was central. We didn’t want a static experience. It’s all about having fun, still. Visiting Egypt in a new way, and learning about it.”

The Egypt we’re talking about is one from 2,000 years ago, though, and features architecture and cultural elements from a further 3,000 years of history before that. As such, even with all the reading and investigating, all the Egyptologists and Wikipedia articles to hand, there are going to be gaps in knowledge.

Guesdon acknowledges this, and is surprisingly frank about how far the team’s knowledge can go – they only know as much as they know, basically. And Discovery Tour goes out of its way to point out when assumptions are being made, or even to outright admit something isn’t known, or that it’s been changed or tweaked to fit in with the game and narrative. 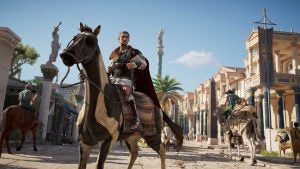 “We do our maximum to be as accurate as possible,” Guesdon says, “It’s always as much a creation as it is a recreation, so technically the idea is that we gather a lot of resources that are really details and pieces, basically, from a lost world. And then we have to fill the gap and to glue that together and to build a different world, so it will never be a hundred percent accurate, that’s for sure.

“This is why we’re not saying we’re an official teacher. This is not the intention at all. We say we think we work well. This is, as far as I know, the best reconstruction – special interactive reconstruction – that exists for now, today. But yes, we still have to do compromises to get some stuff because production-wise we cannot do.”

With the Discovery Tour, the idea all along was for Ubisoft to hold up its hands when it simply did not know something, which led to the addition of a ‘behind the scenes’ format for some facts presented in tours. Rather than being about Ancient Egypt specifically, they highlight why things are presented how they are from the perspective of the dev team – it’s a transparent approach, and one that’s just as interesting as the history lessons on show.

“These things that you didn’t really pay attention to are there for a reason,” Guesdon explains, “And they are documented, and so this is real interesting.” 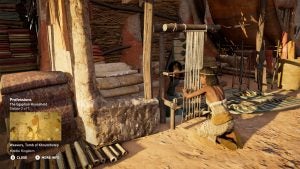 So what’s next? Will we revisit AC: Syndicate’s London, or Unity’s Paris? Maybe not, but if things go well for Origins’ Discovery Tour, it wouldn’t be out of the question to expect more educational journeys in the series: “Basically, the idea was ‘Okay, let’s do it once’,” Guesdon says, “This is the first step, the first iteration. It was the right moment to bring it. Now we’re ready to see the reactions. So how people understand it, use it, what they do with it, which would be the required improvements… I don’t know. No decisions have been made yet about the future.“