Top tips for getting started in Assassin’s Creed Syndicate

But, like it’s predecessor, Syndicate is a huge game that might take a little getting used to.

That’s where we come in though. We’ve spent hours dissecting the latest AC title, and provided some tips that will help you get started with Syndicate. 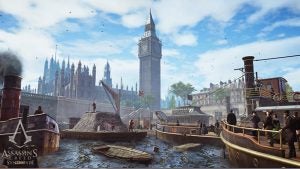 1. Go for the Eagle Points first

If you thought Assassin’s Creed Unity was huge, then you’ve got another surprise coming with Syndicate. Ubisoft claims that Syndicate’s London map is around 30 per cent larger than the Paris recreated in Unity.

The Syndicate map is split into six real-world boroughs (plus the Thames): Whitechapel, City of London, Lambeth, Southwark, Westminster and The Strand. And if you’re a Londoner, ex-Londoner or general capital enthusiast, you’ll want to check out all the sights – particularly the Houses of Parliament.

But to see absolutely everything though, you’ll want to make your way to all the Eagle Points and synchronise your viewpoints.

As with previous Assassin’s Creed games, doing this will make sure you can see all the activities and trinkets on the map, but also open up fast-travel routes across the city. It might just come in useful if you can’t be bothered to traipse across the rooftops or hijack a horse and cart for your travels.

For the first time in the Assassin’s Creed series there’s not only two protagonists, but there’s also a playable female lead. The game features the Frye twins, Evie and Jacob, who have their own unique play style that you’ll need to get to grips with in order to make the most of the duo.

Jacob is the more brash of the twins. He’s better in hand-to-hand combat than his sister and can be fierce with heavy weapons. But he’s a lot less nimble than Evie.  Personality-wise he’s a lot less serious, full of cheesy dialogue and attempted witty one-liners.

Evie on the other hand is determined, focused and prone to a flirtation or two. Personally, I find her the better twin. Especially as her combat style is to take more of a stealth approach. She’s a master of knives and blades, and can move a lot faster and quieter than her brother. But, she’s a little more fragile in hand to hand combat, unless you’ve mastered the new combat system. 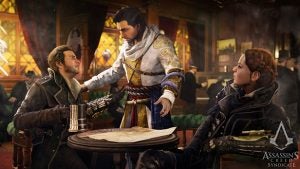 3. Upgrade the skill tree on both twins

And because Syndicate’s two protagonists are so different, Ubisoft has made it possible to keep them entirely separate – even when it comes to the skill trees.

In the Skills menu, make sure you switch between the two characters as you’ll need to upgrade each one individually. That means that you can make Jacob and Evie masters of a single trade.

We’ve taken to making Evie the master of all things stealth – think lockpicking, assassination techniques and more. While Jacob is a badass fighter, with skills focused more on hand-to-hand combat.

Of course, it’s totally up to you as to how you upgrade each twin, tailoring both to your personal play style.

But however you choose to grow the skill tree of Evie and Jacob, we’d recommend making sure both of them have enhanced Eagle Vision. Although the basic Eagle Vision is great, if you upgrade your scanning skill you’ll find yourself at a distinct advantage during missions.

It gets to the point that you’ll start seeing enemies through walls, learning about enemy types and even see which way their facing so you can better plan your attack. 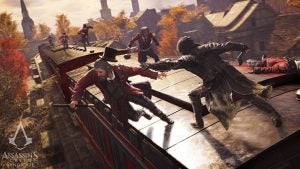 5. Enter combat with a Batman mindset

The combat in Assassin’s Creed Syndicate has really evolved, and you’ll need to go into any hand-to-hand combat situation with a more Batman-like mindset.

Like the combat system in any of the Batman Arkham games, it’s possible in Syndicate to chain together attacks and wrack up some serious combos. You’ll need to attack, block and counter in order to fend off attacking Blighters.

Miss a counter and you’ll take some serious damage, or keep pounding away at an enemy who’s blocking your punches will waste time and allow other enemies to get at you.

There’s a simple way to make sure you can time your attacks well. There’s a health bar above each enemy’s head. This will flash yellow for an enemy that you can counter, or flash white if you need to break their blockade. Making sure you respond to these prompts will make you an expert combatant and make sure you stay alive.

It’s also worth remembering that there are a variety of enemy types, and make sure to check out your opponents before you go flying into a fistfight.

Syndicate has a bit of an issue with cookie cutter enemies, with there only being around five enemy faces that will just repeat themselves a million times around the game. But, it is a helpful way to identify the different enemy types.

The big, broad, bald ones are the brutes and will cause you to lose a lot of health if they hit you. Then you’ve got the gunmen that you’ll need to dodge bullets from; the speedy female enemies that will jab you in the side with a knife and follow you over rooftops; or the lookouts that’ll call for back-up if they spot you lurking around.

Using your Eagle Vision will highlight those enemy types if you upgrade it, and give you an advantage both before battle and during.

Related: The Witcher 3 Tips and Tricks 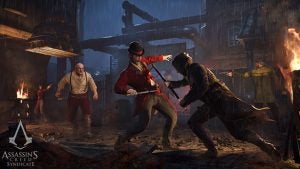 7. Think before you throw your first punch

Another new element to the combat in Assassin’s Creed Syndicate is that they’ll now be displayed with a level above their heads when viewed with Eagle Vision.

As you play through Syndicate you’ll not only level up Evie and Jacob, but you’ll come across enemies who are harder and harder to defeat.

If you start exploring early on in the game, you’ll also find that you’re coming up against enemies with a higher-level rank than your own. That’ll mean a very difficult fight and almost certain death.

It’s worth checking out an enemy’s rank before you start throwing punches.

8. Stock up before every mission

You’ll get access to an increasing amount of gadgets and weapons in Syndicate, so it’s worth making sure all your stock is replenished before you start a new mission.

There are shops dotted all around the map, so you’re bound to find one near to a mission’s start point. You can often run off an restock mid-mission if you find yourself running low on throwing knives or smoke bombs – you know, just those assassin staples.

Where’s a Tesco Metro when you need one? 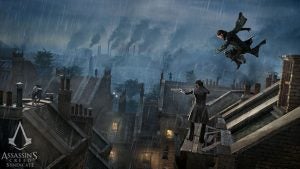 After the first couple of missions, Evie and Jacob will be able to call on their Rook allies to help them out during missions and side quests.

Look out for the little green dots on the mini-map. These are your Rooks, and you can enlist their help by pressing R1 or RB. They will then be ready to attack at the touch of a button, as if you’ve highlighted an enemy you can press R1 or RB to send them in to fight for you.

For every mission and quest, you’ll have a few main objectives, but most of them will have an optional sub-objective that you might want to check out.

It’s an easy way to earn some extra XP and rewards at the end of the mission, but it’s always a great way to learn more about the variety of killing methods in the game.

Even early on, you’ll have to option to use dynamite crates to take out a high profile target, take out enemies via the zipline, or even run them over using a horse and cart. 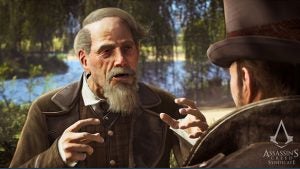 11. Pay attention to your allies

It pays to undertake missions for your important allies, such as Alexander Bell, Charles Dickens or even Green himself. Not only will they learn you trust you more, but you’ll also be able to get more missions from each one.

Hey, it always pays to have good friends around you. Especially the ones that reward you for your loyalty.

When you get your very own steam train, you’ll also unlock a roaming home base. It’s easy to forget that it’s even there sometimes.

But it’s here that you can collect your income, upgrade your facilities and organise your Rooks. It pays to get yourself back there every now and then if you want to make some serious dosh.

Related: Xbox One Tips and Tricks 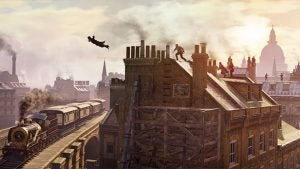 With all the gadgets, weapons and tools at your disposal, it makes sense to take advantage of the London environment.

String up a zipline and take out enemies from the sky; blast unsuspecting enemies using that conveniently located box of dynamite; turn a cluster of enemies crazy by shooting a hallucinogenic dart into the flaming battle they’re crowded around; the list goes on. 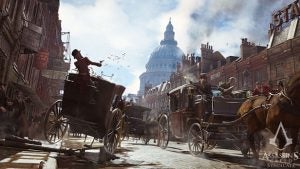 This is more of a reminder than a top tip, but it’s useful to remember.

Unlike Assassin’s Creed Unity, which was heavily focused on co-operative and multiplayer gameplay, Syndicate is a solo affair.

It’s all up to you to save London from the Templars with Evie and Jacob, and we’re really relieved Ubisoft has left multiplayer for other titles.