It’s official, Assassin’s Creed Syndicate is the follow-up to Unity. Ubisoft has revealed details about the location, the new assassin and the weapons you’ll get to play with. Here’s our pick of the best bits about the new AC

Yes, Assassin’s Creed Unity was arguably the most bug-ridden instalment in Ubisoft’s open world, stealth franchise. But it was also a great successor to the ship-sinking antics in Black Flag.

Assassin’s Creed Syndicate will swap the French Revolution for another European location and launches on October 23rd on the Xbox One, PS4 and PC.

Ubisoft has given us our first official details about a game we will no doubt learn more at E3 2015, which kicks off next month.

It’s going to be in London
Well, we had a pretty good idea it would be when the setting details leaked back in December last year, and now Ubisoft has confirmed that Paris will make way for London. Spread across seven London boroughs, the action will head back to 1868 during the Industrial Revolution.

Ubisoft feels the Victorian era, where great breakthroughs were made in transportation and science, is the ideal backdrop for Syndicate. It’s also a time where organized crime was more prevalent in society along with the growing divide between the ruling and ruled classes. So in Syndicate you have the oppressive Templars on one side and the street gang Assassins on the other waging war against each other. 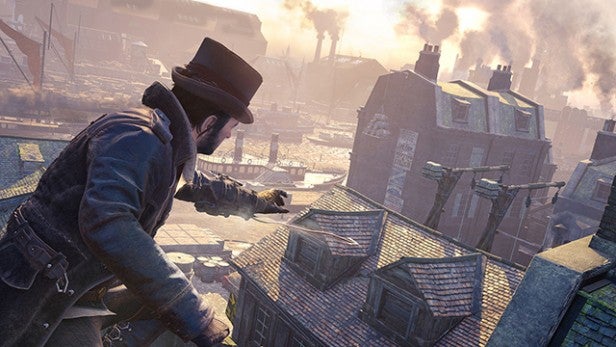 The new Assassin is called…
Jacob and Evie Frye. Yes, Ubisoft is adding a playable female character for the first time in the AC franchise. It’s probably no surprise, especially after the furore caused by comments made by Assassin’s Creed Unity director Alex Amancio, which initially suggested that adding a female lead to Unity would have created too much extra work. Ubi has responded by introducing twin Assassins where Jacob is the hot headed of the two tempered by the more rational Evie who favours the stealth approach to combat.

You’ll be able to switch between the two to complete objectives and take on rival gangs. While co-op play wasn’t mentioned, there’s every chance Syndicate will follow Unity by adding the ability to work closely together as you trawl across the streets of London. 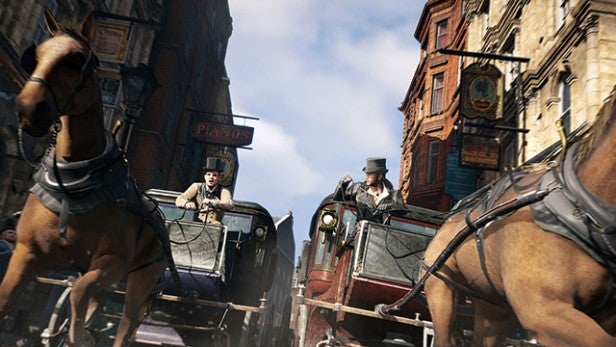 You can ride around town in carriages
For the first time in the series, you won’t have to rely on fast travel or parkouring across rooftops to get to your destination in a speedy fashion. In Syndicate, you’ll be able to ride around town in horse-drawn carriages and trains like a Victorian-style GTA.

As well as battling it out on top of speeding trains, you can hide inside vehicles when you need to go stealth and carriages will can even pick up damage slowing you down as you’re being chased by rival gangs. 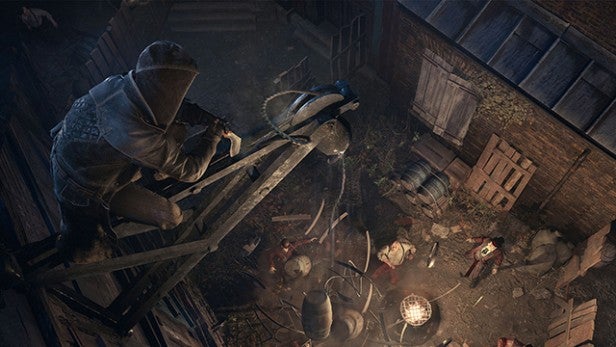 A first look at Syndicate weapons and brawling in London
One of the most satisfying elements in any Assassin Creed game is combat. Ubisoft says it has cranked up the fighting tempo and improved hand-to-hand combat. Moving to the Victorian Era has also meant a total re-think about weapons. In-game footage revealed that the weaponary at your disposal will be as brutal as ever with a Kuri knife, brass knuckles, throwing knives and a rifle among the new additions.

There’ll also be some familiar tools at your disposal like a rope launcher and smoke bombs that appear to work in a similar fashion to the beserk darts in Black Flag to turn enemies against one another. Eagle vision can still be employed to survey your surroundings and you’ll now be able to use the environment to help take out enemies.

In a bid to free the masses from poverty and corruption, Jacob and Evie will mostly have those Templars to deal with. We know that one of those Templars will be called Bloody Nora. We don’t know a great deal about Nora apart from the fact that she’s one of the Borough leaders. It’s also quite clear from the announcement video that she’s not the biggest fan of our twin Assassins.