ARM Cortex A72: What it is and what it means for you

ARM has just unveiled a trio of new mobile processor IP designs: the Cortex A72 CPU, the CoreLink CCA-500 interconnect and the Mali-T880 graphics chip.

They’re designed to provide the next leap in performance and power saving for smartphones and tablets, and ARM is claiming performance is nearly double that of current top-end chips and 50 times those from five years ago.

It sounds impressive, but what difference will they actually make? Let’s take a look.

Remember This: ARM designs chips but doesn’t make them

The first thing to establish about these new designs is that they’re just that: designs. ARM creates and licenses technologies but doesn’t build them into products itself. That’s why the company is targeting 2016 as the time when chips based on these plans will be available – it’ll take that long for other companies to incorporate the designs.

ARM works with a multitude of partners, including AMD, Apple, Qualcomm and Samsung, and there’s a very high likelihood that all these companies will release products based on the designs. However, currently only Huawei, Mediatek and Rockchip have announced they’ll definitely be using the new plans. 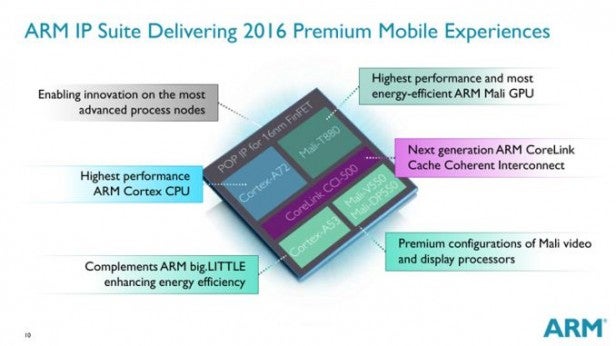 The other key point is that none of these are designs are for whole chips. Instead the designs are coupled together along with other parts, such as display controllers and digital signal processors, to make up a complete System on a Chip (SoC). These SoCs are what the likes of Apple and Qualcomm then make, such as with their Apple A7 and Qualcomm Snapdragon 805 designs.

With that established, let’s take a closer look at what the new ARM designs have to offer.

The first of the three announcements is the Cortex A72 CPU. This is set to replace the existing A57 core used in the likes of the Exynos 5433 and Snapdragon 810, and ARM is claiming it will be 1.9x faster in sustained performance once incorporated into full SoCs. 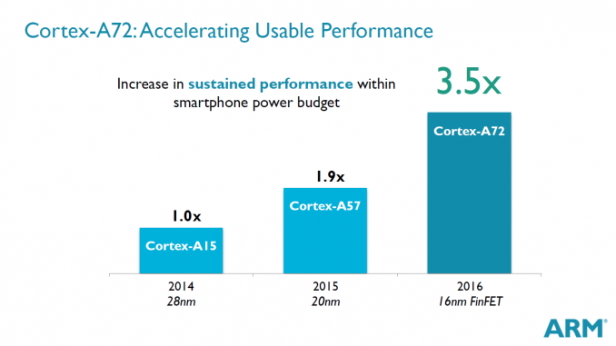 What ARM has glossed over slightly is that a large part of these gains will be down to the chips being made on a new 16nm FinFET process, compared to the 20nm of most Cortex A57 designs and 28nm of Cortex A15. This move to smaller transistors brings inherent efficiency gains, allowing for potentially higher clock speeds.

Still, the combined advantages of the new manufacturing process and the new design will bring big leaps in speed and power consumption for next year’s devices.

The other key point about Cortex A72 is that it’s the ‘big’ chip in ARM’s big.LITTLE SoC design. This means it’s the high-performance core that’s only used occasionally and is meant to be partnered with lower-power cores that take on much of the day-to-day duties. Currently ARM’s A53 design takes on LITTLE duties, and that’s set to continue with the new designs for next year.

Related: Snapdragon 810 Features: What you need to know 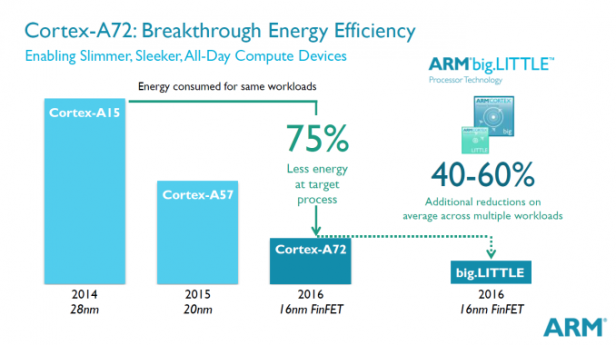 This is why the likes of the Exynos 5433 and Qualcomm Snapdragon 810 are called ‘octa-core’ chips, as they use four Cortex A57 cores and four Cortex A53 cores. Exactly what configurations we’ll see for next year’s SoCs is still very much up in the air, but it’s possible that we’ll see chips with a 2xA72 and 4xA53 configuration, as the power of two A72s will be more than sufficient.

CoreLink is the brand name for a range of interconnect designs that can be used to pass information between the various parts of an SoC. The last update ARM issued to its design was the 3-year-old CCI-400, which was at the heart of ARM’s push for big.LITTLE configurations. 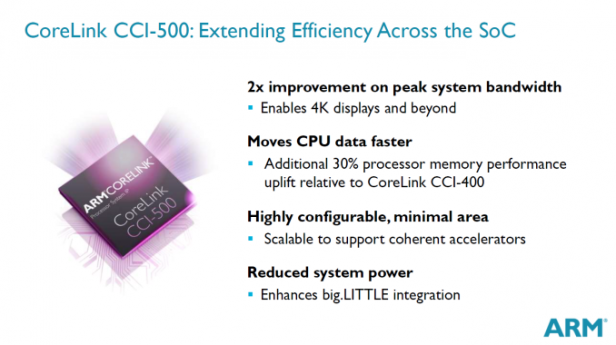 Now the company has come out with a new design, the chief benefit of which is greatly improved system bandwidth that will allow for SoCs to deal with 4k displays.

It also has 30% better memory bandwidth thanks to the inclusion of a new snoop filter, which reduces the amount of transactions when doing cache lookups. This allows for power-efficiency benefits, as well as reduced overhead on the interconnect.

The final addition to the trio of new designs is the new Mali T880 graphics processor, which again brings big speed and efficiency gains.

ARM claims the new chip design will be 1.8x faster than the current Mali-T760 while it’ll also use 40% less power.

Related: Intel’s 14nm revolution – Why you should care 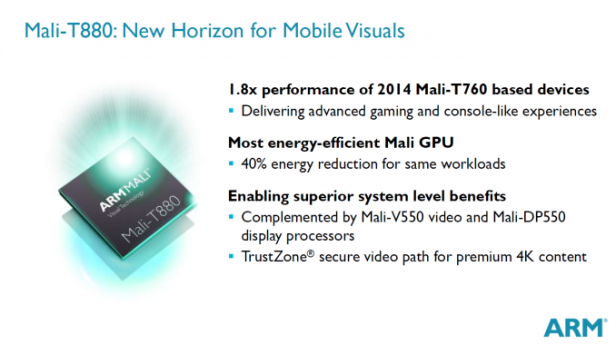 Although it does bring some new technologies – including support for 10-bit YUV, for more efficient support for high-resolution displays – ARM is a little light on the details. Plus, again, a fair amount of the benefit will be down to the use of the new 16nm FinFET production technique.

Conclusions: When will we see A72 products and what will they mean?

We’re only just seeing the first products to use last year’s new ARM designs come to market. Most of the upcoming flagship phones – the likes of the HTC One M9 and Samsung Galaxy S6 – set to be announced at the Mobile World Congress in March likely to use Cortex A57 derived chips. That means that it really will be over a year before we see the fruits of ARM’s latest labours.

Still, we’re definitely excited to see what chips and final products will be made using these new ARM designs, however long we have to wait. As ARM’s processors get more powerful, the more likely it is they’ll end up powering devices that would previously use processors from Intel and AMD. This opens up all sorts of interesting avenues, such as the often discussed possibility of Apple switching to ARM-derived processors for some of its MacBooks.

The technology may sound dry and boring, but what companies use it for won’t be.