Apple Watch vs Pebble: How do they differ?

Is there a smartwatch out there you should already own? The Pebble makes a very convincing argument, but is it better equipped than the Apple Watch?

Before there were even whispers of the Apple Watch and Android Wear was even public knowledge, the Kickstarter-funded Pebble smartwatch was already showing the big boys how it’s done.

It had the strong backing from developers, a steady stream of apps, and compatible with both iPhone and Android phones

Now it perhaps faces its toughest challenge to hold onto that mantle of offering the most complete smartwatch experience. Does it have enough to fend off the challenge of Apple’s smart timepiece? Here how the specs and key features of the original Pebble compare with the Apple Watch.

The orginal Pebble is largely an all-plastic affair but you do have option of the Pebble Steel, a stainless steel model, which has a sleeker more traditional watch look. It costs around £300 for the Steel, though, where the original is around the £150 mark. Opting for a narrow, rectangular watch face, it’s one of the lightest and more comfortable smartwatches to wear. It’s not as thick or as chunky as some of the Android Wear smartwatches and with a water resistant casing you can take it swimming or in the shower as well.

Apple is definitely covering all of the bases here. It’s offering 38mm and 42mm rectangular watch sizes clearly inspired by the sixth generation iPod Nano. There’s the Watch, Watch Sport and Watch Edition. The latter features an 18-karat gold case, so it’s guaranteed to be the most expensive. Apple is offering six interchangeable straps some of which are better suited for getting sweaty while others, like the soft quilted leather, for when you need something to match a suit. One of the more unique features is the Digital Crown dial that can be used to navigate the Apple Watch without having to interact with the touchscreen. 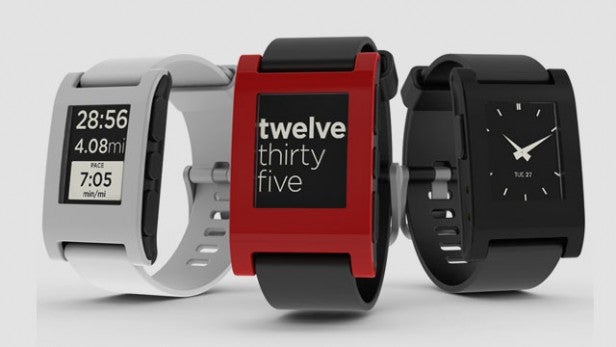 The Pebble is one of the few smartwatches to use an e-paper screen with a backlight for night time viewing. It’s similar to the technology used in ebook readers like the Kindle. This means it’s easier on the eye, offers good visibility during the day and is better for battery life. It’s not really the best place to look at pictures or anything more content rich, though.

With all the talk of the iPhone 6 having a Sapphire display, Apple decided to save this feature for the Apple Watch instead. The toughened glass rival for Gorilla Glass 3 should give the Apple Watch better protection against scratches, bumps and knocks. Apple still uses a Retina Display to keep visuals and icons looking sharp and also introduces something called Force Touch. This means this screen has the ability to tell the difference between presses and taps. 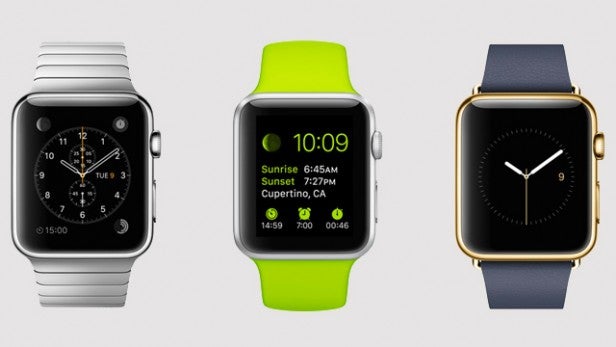 One of the biggest advantages of Pebble’s operating system is that it plays nice with iOS and Android. It’s a more open experience for Android phones but ultimately across the board you can still receive notifications, control music playback and accept or reject calls. There’s plenty of apps as well, both native and third-party, covering big names like Facebook and fitness apps like Runkeeper as well. It’s the most complete of the ecosystems currently available.

Apple hasn’t revealed specifics, but we do know that it’s not simply an optimized version of iOS 8 and that it only works with iPhones from iPhone 5 onwards. This is an operating system built specificially for the Apple smartwatch so there’s going to be some things iPhone and iPad users haven’t seen before. There’s still a homescreen where all of the apps live and it will still be based around receiving notifications from your phone. There’s widget-style features like the new Glance mode and a ‘taptic engine’, which is essentially a type of haptic feedback feature that vibrates to alert you to notifications.

Apple hasn’t announced a dedicated app store as some had initially suggested, but it did reveal a selection of native apps and the WatchKit platform where developers can start buillding apps to make best use of the Apple Watch. It will be interesting to see whether there will be an appetite from Pebble app developers to shift focus to Apple’s smartwatch before its launch in 2015. 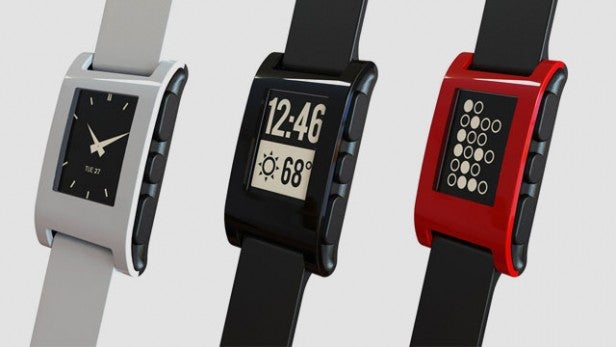 In theory the Pebble has some of the best staying power of any smartwatch available, especially when you compare it to the first round of Android Wear watches. You should get a full week out of it but that depends entirely on how much you use it and whether you use the power saving screen saver mode. It definitely helps that you don’t have a power-sapping LCD screen hogging the battery, thoughl.

Apple didn’t utter a word about battery life for its smartwatch, so that could mean it’s not that good or maybe they are working to make sure it lasts longer than a day. What we do know is that will use wireless charging, so there shouldn’t be any ridiculous charging cradle to carry around.

There’s nothing dramatically impressive about anything else the Pebble can do. There’s a 3D accelerometer to open up the possibility of tracking data in fitness apps, but that’s about it. The Apple Watch has a few more tricks. There’s built-in Siri, which works similarly to Google Voice Search on Android Wear. Apple uses an array of sapphire lenses on the back of the watch to create its own heart rate sensor technology and can be used with the new Fitness and Workout Apple Watch apps. Two of the most interesting features are the Apple Pay and Passbook integration. Here you’ll be able to go into shops or a board a plane simply by showing off your smart timepiece.

The Pebble and its ecosystem is the most complete smartwatch platform out there. It works across platforms, has a great app support and the hardware is built to go the distance. At £150 for the original Pebble, it’s going to be cheaper than the Apple Watch, which could be around the £250-260 mark when it launches in the UK.

Without knowing about key features like battery life, it’s difficult to know how the Apple Watch will fare. If the app developers get behind it, it could be trouble for Pebble. With Android Wear likely to grow as well over the coming months, the Kickstarter-funded project could be the one to really lose out. Its key strengths are good battery life and price, but are they enough in the face of Apple and Google? We’re not convinced.

Next, read iPhone 6: The Complete Guide