There’s more power in the Apple Watch than you think

There was a whole lot to take in from the Apple Watch announcement and we are not just talking about the number of different models it’s going to be available in when it launches in 2015.

The smartwatch we’ve been calling iWatch for months was finally unveiled, first through a Jony Ive narrated video and then by Mr Cook raising his wrist to show off Apple’s answer to Android Wear watches like the Moto 360.

Filtering through talk of 18-karat gold watch cases, the $349 (£216) price tag and no mention of battery life whatsoever, here’s a few other details you may have missed as the live stream jumped in and out of action.

The world was consumed by talk of the iPhone 6 having a Sapphire screen prior to the event that no one really thought about the Apple Watch using the material, which already appears around the camera lens and home button on the iPhone 5S. The toughened glass rival to Gorilla Glass however does not feature on all of the Apple Watches. The Sport edition actually uses something Apple is calling ‘strengthened Ion-X glass’.

There’s very few details on how this differs from Sapphire but it appears Apple has changed things up largely because this protective coating is lighter. This should hopefully make it less cumbersome to wear when you are out for a run or working a sweat up in the gym. Apple has yet to talk weight dimensions so it’s not really clear how much lighter it will actually be compared to the standard Apple Watch and the more extravagant Edition models.

Apple were so caught up talking about the Digital Crown
as potentially becoming as iconic as the iPod click wheel that it was easy to forget there’s actually a button just below the clever watch dial. This takes control of what Apple is calling Digital Plus, a place where you can quickly communicate with others using quick sketches, sending animated emojis or even your heartbeat. Which leads us nicely onto the next feature… 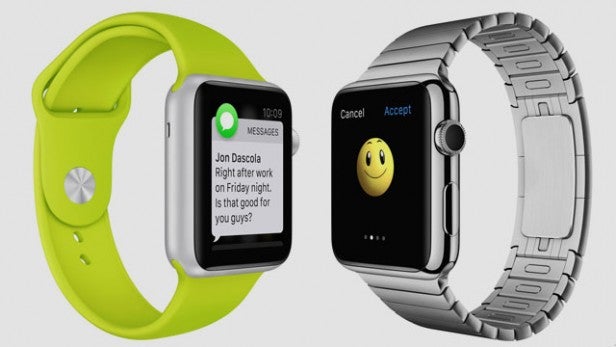 The Apple Watch isn’t the first smartwatch to include a heart rate monitor and certainly won’t be the last. However, having seen Samsung’s take on tracking this extra layer of biometric data, there’s definitely room for improvement. Apple is doing things slightly differently, which should hopefully lead to more accurate and consistent readings. First of all, it’s using a series of photosensors along with infrared and flashing LEDs, which flash against the skin to take a reading.

The crucial component here is the inclusion of an accelerometer. This is the same approach that running watches like the TomTom Runner Cardio uses to ensure movement doesn’t interrupt the accuracy of the reading. Until we have a play, we won’t know how good it is, but there’s every reason to suggest it could do a better job than other heart rate sensors currently packed into smartwatches like the Samsung Gear Fit. 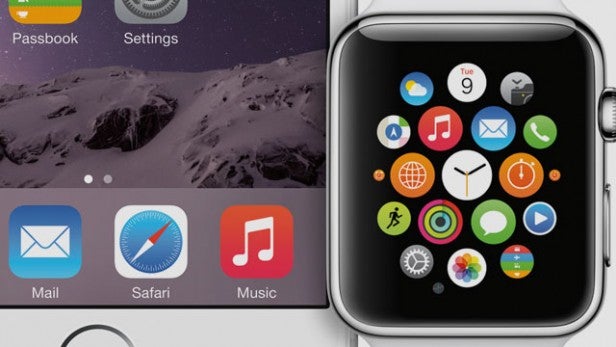 It’s probably going to be the most expensive walkie talkies you will ever buy, but Apple is adding the functionality to be used between Apple Watches. It’s done using the Digital Touch communication feature and uses the built-in speaker and microphone to record and send small audio messages. It’s not clear whether the functionality might one day work with the new iPhones as well, but the thought of running around like a five-year old playing army does sound like a lot of fun.

5. Will it work for lefties?

No doubt there were a few people asking this question as it was demonstrated on stage and in the promo videos. The good news is that you can adjust watch face orientation and watch bands can be swapped as well to make sure they are the other way around to better suit users that will want to wear it on the other wrist. You will however still have to contend with the fact that the Digital Crown will still be on the right hand side of the watch, which could make using it slightly tricky.