Which streaming box should you buy?

Now that the Nexus Player is on sale in the UK, it seems as good a time as any to see how it compares to the TV streaming veteran, the Apple TV.

But we should preface all that follows with one obvious caveat – the Nexus Player is brand new while the third-gen Apple TV has been kicking about since 2012. The Apple TV has received various software updates since then, but the hardware hasn’t changed a jot.

Apple is expected to release a new Apple TV later this year, but how does its nearly three-year-old effort compare to Google’s latest TV entrant?

Hey look, black boxes! There isn’t much to get excited about here. Both players are inoffensive little things that don’t take up too much space.

The Nexus Player is slightly unusual thanks to its saucer-shaped design, and we rather like the way the connections are recessed to help hide cables. 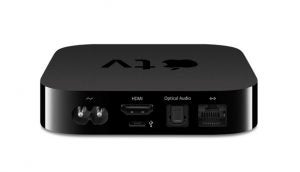 That said, the Nexus Player is quite a bit larger and there isn’t a good reason why. On balance the Apple TV seems a bit neater, but it really doesn’t matter that much.

Apple wins for connections, though. It offers 10/100 Ethernet and TOSLINK optical audio on the Apple TV, while the Nexus Player lacks both.

The Nexus Player has a Micro USB port and a USB Ethernet adapter will work if plugged in, but it would be easier if it was simply included as standard. 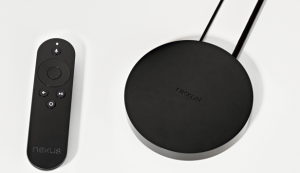 On paper there’s no contest here – the Nexus Player is far more powerful than the Apple TV. But it’s not the kind of difference that you’ll notice when actually using them. Both support up to 1080p video at 60fps, and both are nippy and responsive in general use.

The extra power of the Nexus Player is felt in some of the extra things it can do, such as playing games and voice search, and the more dynamic interface that lets you browse the homescreen while a video plays in the background.

The Nexus Player isn’t exactly a powerhouse, though. It’s perfect for casual games, but we found it struggled when playing more graphically intense titles – its GPU is several generations old now, and is in fact just a single iteration newer than the Apple TV’s GPU.

The two have similar limitations, too. Both have 8GB of built-in storage for apps and caching films, which isn’t that much. It’s more of a problem for the Nexus Player, though, as you can download games and apps that will fill that space up fairly quickly.

The newer Nexus Player enjoys the latest version of Wi-Fi, though, which should ensure much smoother video streaming. 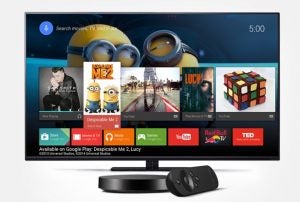 The Nexus Player starts with a main content stream that pulls in recommended YouTube videos, movies and TV shows. Further down are icons for apps and games. It looks very slick and behaves as such most of the time, though there are a few frustrating rough edges currently. In classic Google style, it has a whiff “we’ll fix that later” about it.

Its biggest strength is the great YouTube experience. The way recommended videos appear on the homescreen invites you to dive in when you have some time to kill. It very much feels like the on-demand alternative to channel surfing, but instead of flicking through channels you’re browsing all the latest videos from your subscribed channels.

When you consider YouTube has great news content from the likes of Vice News, BBC Newsnight and plenty more – not to mention the millions of other channels out there – it makes a very compelling case for its role in the future of TV. It certainly makes up for some of the jankier elements, such as the Music App that crashes too often for comfort. 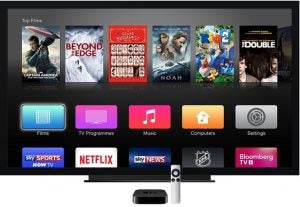 Apple TV, by comparison, is very simple. The main Apple apps are featured in the row – highlight them and popular and relevant content appears in a filmstrip along the top. You can scroll down for more third-party apps.

The biggest difference between the two is how Apple TV’s apps are, by comparison, very self contained. There’s nothing like the Nexus Player’s Voice Search, which searches for relevant content across various channels. On Apple TV, each app has its own search, but you can’t search all of them at once. This is the kind of thing we expect Apple to remedy with its new product later this year.

The Nexus Player has a built-in mic for voice search and connects via Bluetooth. It’s a nice remote with solid, crisp buttons.

We don’t understand why it doesn’t have Next and Previous buttons, though. This proves really irritating when you’re listening to music – if the screensaver kicks in, you have to make three or four buttons presses just to skip a track. 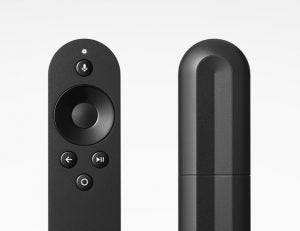 The Apple TV remote is quite a bit slimmer and uses infrared. It’s a nice remote that complements and works with the interface well. Unlike the Nexus Player, it will skip a track if you hit Right on the keypad when the screensaver is activated.

The bottom line here is this: they’re remote controls and they remotely control. 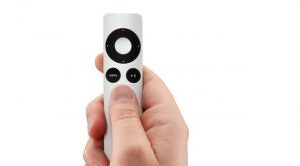 Things get a little more interesting if you pair your phone or tablet, as both can be controlled using remote apps. The Android TV Remote App is fairly basic – it mimics the look and feel of a real remote and makes it easier to input text using the on-screen keyboard.

Apple’s Remote app is only slightly more advanced in that you can view and search your iTunes library using the Remote app, then play it on the Apple TV. Besides that it adds gesture and playback controls that are similar to Google’s effort.

What you get varies a great deal depending on where you live, but it’s a surprise win for the Apple TV here. The Android TV app store is rather sparse so far, while the Apple TV boasts enough big names to give it the edge. For example, while both have Netflix, the Apple TV includes Now TV (UK) and HBO Go (US) – with HBO Now for “cord cutters” coming soon – among many other high-profile providers.

Neither’s limitations are fatal, though, because of Apple AirPlay and Google Cast. These systems let you stream content from phone and tablet apps to your TV over Wi-Fi, and both work equally well. The one advantage AirPlay has is support for peer-to-peer connections, where you can connect directly from device to device rather than being connected to the same router.

The native services are very similar, too. iTunes Match users can stream their library on Apple TV, while Google Play Music users get the same feature alongside its wider streaming offering. The selection of films and TV shows to buy and rent is basically the same, though Apple has a slight edge thanks to iTunes Extras. It provides bonus features similar to, and often identical to, that of the DVD or Blu-ray release, though it’s not available on all releases.

The Apple TV doesn’t play games, so let’s talk about the Nexus Player and its gaming credentials.

As noted earlier, it isn’t that powerful. Casual games run fine, but anything that throws glossier effects in there can get a bit choppy. This isn’t a serious criticism given how cheap the Nexus Player is, merely an observation – if you want serious gaming then the Nvidia Shield is the one to look out for.

The optional Bluetooth game controller is decent enough, but most games worth playing work well enough using the remote. There’s a reasonable selection of free and paid-for games that are mildly diverting, though there aren’t any you couldn’t already play on a phone or tablet.

It’s an area of real potential but, like Android TV and the Nexus Player as a whole, the library and experience are quite raw at the moment. 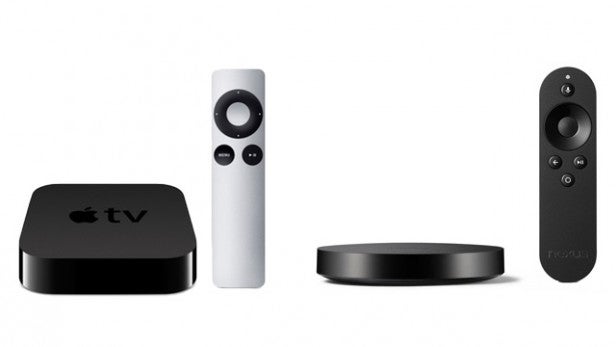 Both are somewhat flawed in their own ways. The Nexus Player is new and fresh, with bags of potential, but it’s full of rough edges and hampered by an underwhelming app selection. The current Apple TV is ageing and past its best, but gets the job done and edges things in the content department.

For that reason we don’t recommend anyone buy either at the moment. The Nexus Player is worth considering if you’re a hardcore Google and YouTube user, but we suspect better Android TV devices aren’t far off. Apple TV, meanwhile, is due a serious update later this year that’s worth waiting for.

If you need a stopgap, the likes of the Google Chromecast, Amazon Fire TV Stick and Roku Streaming Stick are cheap, effective ways to upgrade your TV without spending too much.