What will the coolest features be in Apple’s next slew of tech? These patents might just hold the key

What will the iPhone 7 and iPhone 8 look like? That’s what we all want to know. Actually, while you’re at it, Apple, if you could give us a heads up on what to expect from future iPads, Macs and the Apple Watch 2 as well, that would be just grand. Oh, wait, you already have? Cheers, guys.

While Apple might hold it’s release plans and finalised device schematics close to it’s chest, the company’s patent lawyers are a lot more forthcoming in giving us a tantalising insight into the future of all our favourite iDevices – not to appease our insatiable desire for more juicy details, but to ward off rivals from pinching it’s ideas. These Apple patents paint a pretty good picture of what we can expect from the next fleet of products though, and we can’t wait for this lot to drop.

We all love a good autocorrect fail, they’re ducking brilliant. But only when they happen to someone else. When it’s us who see our innocent typing randomly changed to something sinister or embarrassing, it’s no laughing matter. Don’t worry though, according to a recent Apple patent, future iPhones will put an end to such worries. 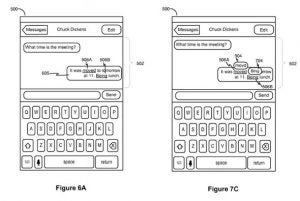 The brilliantly simple advancement will see all autocorrected words underlined. Not just for the sender either, but the recipient too. As well as highlighting text that’s been tampered with, tapping on the underlined words will let you see what was originally typed, be it typo-strewn nonsense or a far less embarrassing term than the one you just accidentally sent to your mum.

2. Next Apple Watch could display messages on the strap

The Apple Watch is arguable the best smartwatch currently available. It’s about to get a whole lot smarter though, well, it’s straps are anyway. Among the throng of Milanese Loops and Woven fabric bands, Apple has shown that it’s looking at building a second screen into its smartwatch straps. This more battery-savvy, less visually-impressive panel would let you easily check message notifications and alerts without having to wake the primary display. 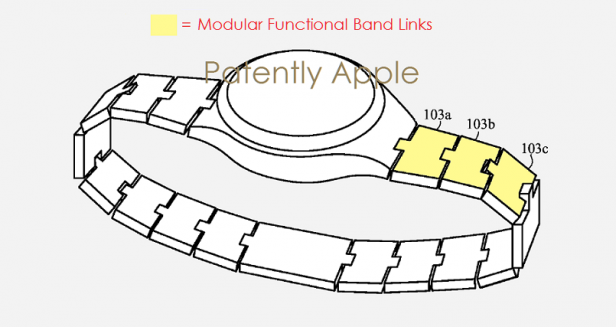 That’s not where the strap-enhancing skills are set to end either. As well as straps that show messages, Apple has also patented Apple Watch bands with interchangeable modular links, meaning you can swap in and out additional smartwatch skills at will. Anyone for an integrated wrist-based camera?

That’s right, your future iPhone and iPad could boast a screen that isn’t afraid of your fingerprints, and no, we’re not talking about next-generation oleophobic coatings to reduce those pesky visuals-depleting smears. Instead, patents have shown Apple’s future phones and tablets will do away with the security enhancing Touch ID home button, with your biometric password to be read directly through the display instead. 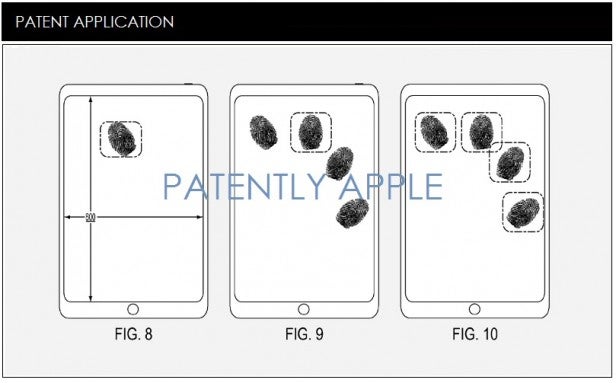 Living under the eye-appeasing Retina panel, these oversized fingerprint scanners will take out a vital step between you gaining instant, and secure, access to your portable devices. Capable of reading the prints of more than one finger at a time, these screen-based sensors will also bolster your online safety when tagging a digit to make an online payment or authorising a money transfer.

4. Macs that let you feel textures and temperatures

Haptic feedback is nothing new. A number of companies are known to be working on touch elements that let you ‘feel’ textures instead of simply rubbing your fingers over a smooth, flat panel. Apple though is trying to take things one step further. A recently granted patent has shown the company is getting ready to bestow its MacBook lines with trackpads that let users not only feel texture, but temperatures too.

Opening up near endless possibilities of being able to feel what clothes are like when shopping online and getting a sense of what the weather’s like in a tropical holiday destination before booking flights, the firmly futuristic tech makes your current Live Photos-enabling Force Touch feature feel positively antiquated. You won’t really feel textures though. Instead the trackpad will vibrate to create the sensations of certain materials to trick your brain. Still, pretty cool, right?

5. iPhones and wearables will benefit from curved screens

The Samsung Galaxy S7 Edge has already shaken up smartphone standards with a screen that wraps around both the left and right hand edges of the device. Apple is looking to take things one giant leap for mankind further though with an iPhone that features a fully curved, fully flexible display.

The modern version of the clamshell handsets of yore, this would let you have a sizeable smartphone that can still be made pocket-friendly. The flexible screens will not only improve practicality, but make future iPhones less prone to drop-based breakages too. And it’s not just phone’s it’s heading for either. Apple has pegged its flexible OLED tech for use within curvy wearables according to documents passed through the halls of the patents office.

6. Your next iPhone camera could rival a dedicated DSLR

Smartphone snappers continue to get better and better, and the iPhone 6S camera is one of the best out there. Apple isn’t content with where things are though. Things are about to get a whole lot better because you’re smartphone’s not just going to replace your traditional compact camera, it’s coming after your DSLR too.

A number of granted patents are relevant here. As well as the incoming addition of a ‘super resolution mode’ and the ability to capture 3D photos (really, guys, you’re still pushing the 3D angle?), Apple is known to be working on an iPhone camera with interchangeable lenses. This means you’ll finally be able to vary your imaging options without drastically depleting image quality. Wideangle and telephoto lenses are just two of the options reportedly in the works. Your Instagram snaps will never have looked so good.

7. The Apple Watch won’t be the company’s only wearable

Excited about updates to Apple’s existing product lines? Then just wait to see what new stuff the company’s working on. For those who covet and Apple-branded wearable but don’t want to make room on their wrists between the Fitbits, Misfits and other bits, then the Apple Ring, patented back in 2015 could be the device for you.

Not only could the Apple ring spawn a whole new area of wearable tech, it’s patent details suggest it could leave the Apple Watch in its wake with touch-sensitive surfaces to line up alongside gesture-based sensors, an integrated mic for Siri-based voice command, and even an inbuilt camera. Who even needs an iPhone with all this compact tech?

8. The Apple Pencil that lets you correct your mistakes

The Apple Pencil, the company’s iPad Pro-friendly stylus that has been lauded and laughed at in equal measure, is about to get a whole lot smarter. The second-generation model, which will presumably drop alongside a revamped pro-grade tablet, will feature an integrated eraser, letting you rid your writing, doodles and annotations from errors a whole lot easier.

Related: Apple Music – How does it compare to the competition?

That’s not where the patented improvements are ending either. Like Microsoft’s Surface-supporting stylus, the future Apple Pencil will also boast interchangeable nibs, meaning you can be a whole lot more precise in the tablet-based artistic styles you’re striving to achieve.

Would you like to see any of these patents turn into real life products? Let us know in the comments section below