What is Apple CarPlay?

CarPlay is Apple’s new in-car platform. It will let you control your car’s entertainment and GPS system, and it connects to any Lightning dock-equipped iPhone – that’s an iPhone 5, and iPhone 5C or an iPhone 5S.

However, this isn’t the sort of system you can simply buy from PC World and bung into your car. At present it only comes built into a limited number of cars from Ferrari, Volvo and Mercedez-Benz. One of the less expensive cars set to get CarPlay integration is the Volvo XC90, which costs around £40k.

Manufacturers with generally more accessible prices are getting on-board too including Kia and Ford. What exactly can Apple CarPlay do? Here are the eight maifn things you can do with the system. 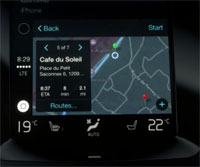 Probably the most obvious use of CarPlay is turn-by-turn navigation. As it’s a platform designed with a central display in mind rather than a traditional smaller head unit, CarPlay will have everything it needs to succeed as a GPS system.

I expect improving this is the sort of thing Apple has on its roadmap, though.

Siri can read you text messages 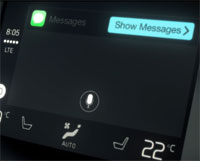 One of the most important features of CarPlay is Siri integration. What can seem a slightly silly gimmick on a phone becomes useful in a car, where the less time your hands spend off the wheel the better.

CarPlay will let Siri read out new text messages through your car’s speaker system, in that endearing robotic voice. You can also send messages, dictating using Siri and then sending them with a voice command or a tap of your car’s touchscreen. 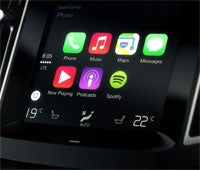 The key reason why CarPlay is interesting is that it hooks into the Apple ecosystem. It’s designed to feel like a continuation of the phone. Third-party developers are able to make their apps work with the CarPlay system, although this is likely to be subject to even more tight restrictions than Apple’s normal iOS app guidelines. It won’t let you play Angry Birds, for example (a strict safety no-no).

Apple has said that Spotify will work with CarPlay, as will the Podcast app and Stitcher. We can imagine most of the main audio apps will get a look in, although we sincerely doubt whether you’ll be able to use Google Maps with the system any time soon. It’s also unlikely that Apple will allow movie player apps to get on-board, as it would be a safety concern.

Control your in-car entertainment with your voice, a touchscreen or buttons

CarPlay offers up to three interface methods. You can use your car dashboard’s touchscreen, if there is one, any physical controls that interface with the main screen, or your voice – through Siri.

Sensibly, though, you need to activate Siri by pressing down on a physical button or switch. It isn’t listening to you 24/7.

Naturally, CarPlay can be used to make and take calls.  As with other elements of CarPlay, you’re able to use Siri to choose who you want to call.

The exact microphone, speaker and noise cancelling setup will depend on the car it’s in. Each CarPhone setup is an effort on both the manufacturer’s part and Apple’s.

Control music playback with your voice 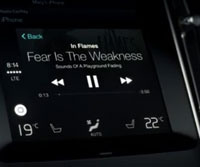 Siri integration makes controlling music playback a lot safer. It’s not just about hitting play or pause, either. Those commands only demand a fraction of a second’s attention.

With CarPlay you’ll be able to directly head to an artist in the music player app – no more lengthy flicking through a list of artists. What we’re not yet sure of is whether Apple will give third-party apps like Spotify free rein to use Siri too. Fingers crossed it will.

It will charge your phone

At present, CarPlay needs a physical connection between your phone and the car, meaning it should be able to charge your phone. It connects using the Lightning port – the phone’s charging socket.

However, Volvo has revealed that Wi-Fi Direct transmission between CarPlay and the phone is in the works too. CarPlay works by streaming an H.264 video stream from the phone to the car’s display, so there’s no change in the way the system works needed to make it run over Wi-Fi. It’ll just be subject to a few more potential technical hiccups.

CarPlay’s iPhone connection and support for third-party apps means you’ll be able to use the system to stream music over your phone’s mobile internet connection, whether that’s through Spotify or an internet radio service like Stitcher.

Being able to get this sort of content in the car is nothing new – you can do this with other phones using a Bluetooth head unit – but CarPlay will give the driver more control.

Are you excited about CarPlay? What are the most interesting features? Let us know in the comments section below.