Back at Google I/O the search engine giants gave us our first look at Android M, and we’re definitely not the only ones thinking the unveiling was a little underwhelming – Google Now on Tap perhaps withstanding.

But for developers, Google’s latest mobile OS introduces a few features that make a world of difference to their apps and ultimately for users downloading those apps as well.

Taking in the live stream from the Google Campus in Shoreditch, we spoke to a host of developers after the opening press conference was wrapped up with talk of Project Loon and self-driving cars. There was a clear consensus as to which feature was the most anticipated – App Permissions.

Currently, Android apps require you to grant access to a number of phone apps or features before you install, ranging from microphone and camera access to your contacts or location data.

With Android M’s new App Permissions functionality, this will change, with apps only asking for permission to features as and when you need them in-app. Plus, you can edit which app is using each feature in the settings menu too – making sure you know what’s using what and when.

This is exactly what already happens on iOS, but for Android users and developers it’s a long awaited feature.

“What we’ve all been waiting for is the app permissions. It finally means you don’t have to ask for them at the point of installation, you can actually ask for them when you need to use them”, explained one Blinkbox Music dev, who wished to remain anonymous.

“[Granular App Permissions] was something I was really excited about. It kind of leaked before, but that was the one thing that everyone was like ‘finally, we have that’”, added Balazs Balazs, a Software Engineer at Facebook. “We have been talking about this each year for years now and we have been really waiting for it.” 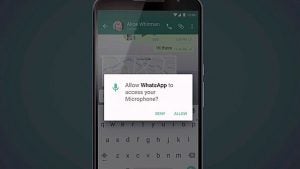 Currently, the en masse pre-install App Permissions systems can be off-putting for consumers. This was especially an issue following the NSA Edward Snowden scandal where apps were asking for microphone access.

That’s partly down to the fact the current system offers no explanation for the permissions; you’re simply asked to grant access to features in bulk without any indication as to why the app requires such a feature. So for consumers the Android M App Permissions update will offer a lot more clarity.

“You see with a lot of apps that they just ask for [access to] everything. But I think the times are just over where the current model is useful,” said Twitter Engineer Pascal Hartig. “It’s nice to see it getting in line with all the other platforms, as web and iOS do the same thing. It’s definitely a good thing. For consumers, I think they’ll be able to get more control [of their apps].” 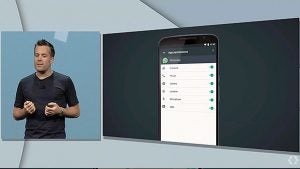 Others believe part of the appeal of App Permissions is about establishing better relationships between apps, their developers and their users.

“You’ll have more trust in applications. From a business perspective, I think applications will gain a lot of trust,” said Andre Catindan, an Android developer who’s worked with Spotify and helped created the Tesco Hudl launcher. “The users won’t have to accept the permissions until they use the features. It’s all about trust and driving more engagement with the app.”

Balazs echoed this too, who expressed the fact he’s had issues with the App Permissions system on his previous apps.

“The user is much more connected to the app and the required permissions. It makes a huge, huge difference I think.”

In the long run App Permissions could help increase Android smartphone battery life too. If you can limit your apps’ access to your location data to the bare essentials for example, that will definitely help your phone get more from its battery.

“From a developer point of view, it will just make our lives more complicated”, said Catindan.

“App developers will have to make sure that their app works without certain features”, said Hartig.

Related: What are Project Brillo and Google Weave? 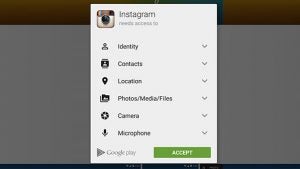 For example, if you download Instagram, it’ll ask you for access to your identity, contacts, location, photos/media/files, camera and microphone without more than some generic blurb as explanation.

With the new system, you’ll be able to limit Instagram’s access to features unless you need them. You might not ever take a video with Instagram for instance, so the app won’t need you to grant access to the microphone at any point.

App developers will need to make sure it doesn’t use the microphone for anything else of course, and ensure that the app works perfectly without it.

But thankfully the Android M Permissions update won’t affect apps you already have installed on your smartphone or tablet. Don’t worry you won’t have to go back and individually accept access to various features for all the apps you know and love.

Instead it’ll only affect new apps or when you start to use a new feature. 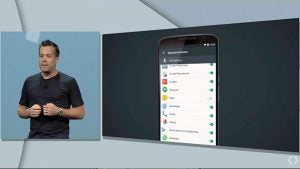 Because of that, app auto-updates will get a whole lot easier too. No longer will you have to go back to the Google Play store to accept a new batch of App Permissions. Instead, the new features will be added to your apps, but will only be granted access to the required tech if you choose to use the features and allow them to.

“For me as a developer, it’s also interesting that it’s not going to affect the auto-update functionality,” added Hartig. “From now on we can introduce new permissions and then ask you inside the app but still update the app in the background.”

That may well mean better apps overall too, as people won’t be so worried about unexplained App Permissions.

“At the moment we have to think really, really hard about asking for new permissions that enable us to deliver new features if we want to get everyone up to the latest version,” said Hartig. “For video [in Twitter] for example we had to ask for some new permissions that we didn’t have before, like permission to access the microphone and the camera, and it’s always the same. You have a large issue with update adoption. And if you want to add any other new features at the same time, it’s always a trade off.”

App Permissions therefore will make Android app usage a more transparent experience, both for devs and users. Hopefully, it’ll help drive Android app and game adoption especially when it comes to micro-transactions, as you won’t need to give your payment details until you decide you need to spend 79p to help you on that Candy Crush level you’ve been stuck on for weeks.