TrustedReviews‘ Games Editor Sam Loveridge speaks to Angela Bassett on playing Six in Rainbow Six Siege, being the first female lead in the series and how voice acting is the hardest job.

With the Rainbow Six Siege release date set for December 1, TrustedReviews had the opportunity to speak to Angela Bassett. The well-known actress – celebrated for her roles in American Horror Story, the Tina Turner film What’s Love Got to Do With It and the classic How Stella Got Her Groove Back – has the task of playing Six in the upcoming Ubisoft FPS.

It’s the first female role in the Rainbow Six series, both in book and game form. And it’s a huge deal in the FPS world. And for Bassett herself.

Do think there needs to be stronger female characters in videogames?
Obviously! I hear this is the first female character, lead and director in a Rainbow Six videogame or book. So there ought to be, especially since there are so many female gamers – upwards of 50 per cent – so why not have more representation.

Do you think women have been under-represented in videogames so far?
From what I’ve been told. You see, I’m not a big gamer myself, so I can’t speak from empirical knowledge. But from what I’ve been made aware of, absolutely.

So, if you’re not a big gamer, what attracted you to the role?
It’s because it’s new territory. I’m always cognisant and aware of the way women are reflected in media. I’ve had a career of portraying very strong, resilient characters – women. And this certainly was in that mindset, it was certainly in that wheelhouse.

But what was interesting in addition to that, is that there have not been a lot of female leads in video games.

So to bring what I do from film and television, stage or wherever to this area was interesting to me.

How is it different, working on a video game, to everything you’ve done so far?
Well it’s a little more isolated in the making of, the building of, the character and the game. So as an actor you’re a lot more isolated from the action, from others, from those you’re reacting to, or affecting.

They’re in their living room somewhere, playing or whatever the case may be. You’re virtually playing with millions of individuals, but you don’t have that immediate connection – Oh, they laughed, they cried, they oohed, they ahhed, you pause or whatever.

Even in film, maybe you have the crew at least – although they have to be very quiet. But you have them, you have your director there, it works, it doesn’t work, you do another take or whatever. But, you depend on your director [on a game].

I think I had one day with a director, but then when I had to come back later for the last bit of the game, there were different people. So it wasn’t the same guy I had for the facial movement and the body capture. It was just for the dialogue.

Is this something you’d consider doing again?
Yes, without a doubt. 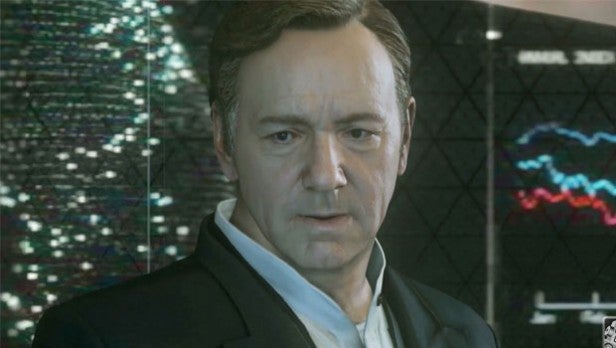 Why do you think actors have started to get more involved in videogames? Is it a trend we’re going to see more of?
I think it might be. Especially when they hear how enthusiastic and how large the fanbase is. Actors like to go where the fans are, they like to go where the trends are, where the excitement is.

Do you think actors are starting to appreciate that videogames are more of an art form now?
Yes, especially the more you see them and the more realistic it becomes. It looks really neat. The production values are improving year to year. The games are becoming more challenging, they’re smart.

I don’t think they’re going to be something that’s pushed to the side.

Do you think voice acting is an under-rated profession in general?
Under-rated? No. I think for years it’s been sought after. I know I did. I think it’s actually harder, it’s more difficult because if you have your body, your voice can be about 40 per cent, whereas my physicality will be about 60 per cent.

So a lot of times when I go up for voice overs or something, it seems more difficult. And I rarely – no, I never – get the job. Never! Let me just say that.

Because the voice, it has to make you see pictures. It has to take you there.