Amazon has surprised everyone by making the Amazon Fire TV available to pre-order in the UK. This versatile media streaming box will be available to buy on these shores from October 23.

But how does Amazon’s effort to take over our living rooms compare to one of the established masters of the art, the Roku 3?

Let’s take a look at the two boxes and see which offers the best package.

Both of these boxes are extremely compact. We’re not talking anything like a Sky or BT box level of bulk here.

Having said that, the Roku 3 is far lighter than the Amazon Fire TV – just 170 grams versus 281 grams.

They look quite different, and while the Roku 3 is the most striking, the Amazon Fire TV will blend in better with your living room set-up. You could argue that it should also prove easier to find a place for the Fire TV given its flatter shape, but given how small both boxes are, that really shouldn’t be an issue.

The Amazon Fire TV essentially has the innards of an upper-mid-range smartphone. It runs on a 1.7GHz quad-core Snapdragon 600 CPU, which is backed by 2GB of RAM. It also has 8GB of storage.

It’s far more powerful than the Roku 3, which runs on a dual-core A9 Broadcom BCM11130 Merlyn and 512MB of RAM. While its local storage is a decidedly tiddly 256MB, it can be expanded considerably through a microSD slot.

This performance disparity seems to show in general usage, as the Amazon Fire TV is widely acknowledged to be the most responsive media box of this kind on the market (we look forward to putting this to the test in our own UK model review).

Still, the Roku 3 is an estimated five times faster than the company’s previous model, which is plenty fast enough for us. And of course, any difference in performance doesn’t matter all that much for the core function of these two boxes – streaming 1080p video quickly and smoothly.

Where the difference really comes in, though, is in the Fire TV’s expanded capabilities, which we’ll discuss in a bit. 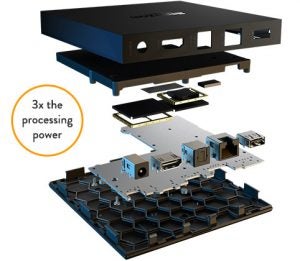 It’s essentially the same as the Kindle Fire tablet’s interface, if you’ve ever used that. In use it’s essentially a bunch of simple scrolling media content grids, with smarty-pants predictive content-pushing based on your viewing habits.

The Roku 3 uses the company’s own custom operating system, which adopts a very simple, intuitive vertically scrolling list of categories to the left and a grid of channels to the right. It’s pretty much universally liked, largely thanks to its channel agnosticism. You can search for content across the whole lot.

That’s probably why it’s generally appreciated more than Fire OS and its in-your-face, walled-off Amazon ecosystem – despite the latter featuring some pretty nifty cloud technology that makes everything run smoothly. 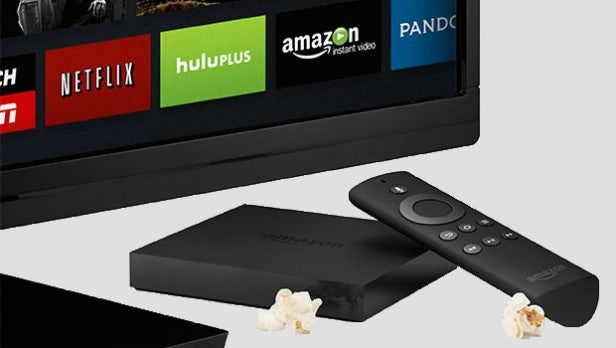 In addition, both controllers come with their own stand-out features. Both, for example, allow you to plug a set of headphones into the remote for private listening – a truly excellent thing to have at your disposal, particularly in crowded households.

The Amazon Fire TV’s big control feature is a voice common button, which lets you search for Amazon content by speaking into your remote – no more clunky d-pad text entry! Except, you will still have to do that for external apps from Netflix and the like. Oops.

The Roku 3, meanwhile, incorporates motion control into its remote. Unfortunately, you can’t navigate through the UI this way, but it does allow for some Wii-like games (more on which later). 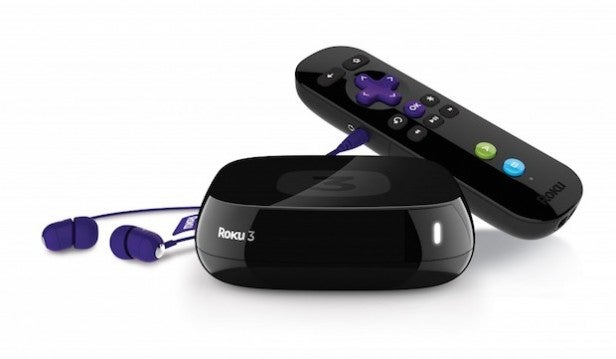 According to Roku, it had over 1,500 entertainment channels available for it as of June 6, while Amazon Fire TV had a mere 15 at that time.

That number’s growing all the time for Amazon, of course, but it can’t be argued that the Roku 3 is much better equipped for video-based entertainment right now – and that’s not even taking into consideration the Roku’s superior channel integration.

Still, the Amazon Fire TV has a trick up its sleeve. Thanks to being built on the Android platform, it has a growing roster of wider-use applications being converted for use on the streaming box, currently numbering into the hundreds.

This, as we shall now discuss, also includes a whole heap of games.

Here’s where the Amazon Fire TV mops up. All that power and that Android-based OS means that the Fire TV is a much better gaming device than the Roku 3.

Indeed, Amazon is really positioning the Fire TV as, among other things, and affordable games console. You can even buy a dedicated Xbox One-like games controller for it.

As of June 6, Roku itself admitted, the Roku 3 had a mere 70 games available for it to the Amazon Fire TV’s 200. That number has since swelled to 346. What’s more, the added power of the Fire TV means that they’re off better quality.

The Roku 3 has Angry Birds and a bunch of dodgy third rate games you wouldn’t look twice at were they on your smartphone. 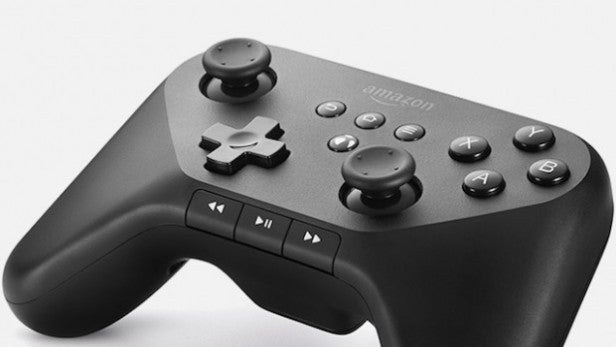 The Amazon Fire TV will cost £79 here in the UK. The Roku 3, meanwhile, looks a little expensive next to it with a cost of £99.

While we like the Roku 3’s simple, intuitive interface and sheer range of channels, we reckon it needs to have a considerable price cut if it’s to remain a viable option when the powerful, glitzy, heavily app-endowed Amazon Fire TV arrives.