There’s still no confirmed release date for Age of Empires 4, but Relic Entertainment have given us just enough info and footage to get us excited for the upcoming real-time-strategy title.

There isn’t too much information doing the rounds just yet, but here’s our pick of the biggest things we’re looking forward to in Age of Empires 4 at this early stage.

Siege warfare is front and centre in the one gameplay trailer that we’ve seen so far. The siege we’ve seen looks pretty epic too, with a vast army with various unit types, including some huge, well-animated trebuchets, going up against a large city wall covered in defending units.

There’s just something dramatic and enjoyable about siege warfare, as films like the Lord of the Rings series, Ironclad, Troy and Zulu will testify. The older titles in the series didn’t offer this type of battle, units simply ran up to walls and hit them with a sword until they fell – we don’t remember seeing that at Helms Deep. Now, we’re expecting players to have to be a little savvier when attacking large settlements, using catapults and siege towers as we see in the trailer.

We can’t wait to see some large-scale sieges play out in Age of Empires 4 and the gameplay trailer, revealed at XO19, showed us that some pretty impressive sieges are possible. The addition of city defenders being able to take to the top of their town’s stone walls is a game-changing new mechanic that adds another layer of strategy to any Age of Empires siege. Take a look at the trailer below…

One drawback of the popular Age of Empires 2 remaster that came out not so long ago was that the AI still stank. It’s an amazing, classic game, but sometimes units can be dopey – both yours and the enemies. It makes for some of the game’s most frustrating moments.

Troops in classic Age of Empires titles would routinely chase off enemies with ridiculous persistence, blazing a trail around the whole map, discovering new territories and eventually being killed when they walked straight into the town centre of your settlement’s greatest enemy. Equally, it wasn’t uncommon to see your guards stand idly by while your buildings were being destroyed quite close by.

These little chinks in the armour of classic Age of Empires titles are the things that we can’t wait to see dragged into 2020. Better AI won’t just improve troop activities and movements either, but the actions of your enemies and allies in diplomacy and in building their own civilisations. Ultimately, it’s going to take the already great Age of Empires formula to the next level.

The town we see in the gameplay trailer contains two or three separate types of religious buildings and two or three different types of housing, as well as an archery range, barracks, market and more. The buildings fit together nicely on top of the game’s new, more realistic terrain and ultimately the town looks a lot more like a town than Age of Empires towns of old did.

Not only are there varied, well-designed building types, there are also larger, more detailed fortifications. This has whet our appetites for some stronghold building in Age of Empires 4.

The new terrain in Age of Empires 4 bids farewell to the oversimplistic maps we’ve seen in past titles. No longer will you see the same uniform cliff edge pasted onto different parts of the map. Instead, there looks to be a real variety in the landscapes that this new title offers up. That not only makes the game look much nicer but adds plenty of new tactical decisions to make.

For instance, in the gameplay trailer, we see the besieging army’s commanders positioned high on a ridge above the battlefield. This protects them from the missiles of the defenders, while also allowing them to scout the battlefield and stay in visual range of their forces.

There’s a lot more that could be done with these new terrain features tactically. We may see more stealthy options for unit movement, or more options when using missile units from high ground. We’re interested to see how the developers have chosen to advance coastal terrain and bodies of water too. Will naval battles be revolutionised? 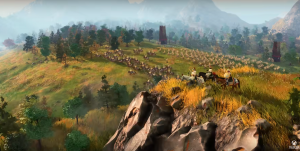 Age of Empires 2 remains the series entry with the largest, most enthusiastic cult following. The warm reception that the recent Age of Empires 2 Definitive Edition got from fans was a testament to that, and it’s partly because the series is just so well suited to the medieval era. Now, in Age of Empires 4, we’re going to see the game taken back to that era – that can only be a good move.

There’s a lot of pressure on Relic Entertainment in reviving such a well-loved franchise. We’ve seen in that trailer that the developers have changed one or two game mechanics, so we think it’s safest for them to balance that by sticking to a period that Age of Empires fans know and love.