A history of Star Wars toys: From A New Hope to The Force Awakens

Since the first ever Star Wars film created the blueprint for the modern blockbuster in 1977, there’s been a lucrative sideline in merchandising, spearheaded by toys – and particularly action figures.

As news of a fresh batch of toys to accompany Star Wars: The Force Awakens emerges, we thought now would be a good time to look back at how it all started.

When they weren’t selling out or threatening to take kids’ eyes out, these moulded lumps of plastic and vinyl were establishing themselves as some of the best-loved toys ever made. Here’s how it happened…

A long time ago…

Back in 1976, a young George Lucas could be found shopping around the rights to make toys for his ambitious new space opera. Lucas was understandably eager to tie up a deal, as he’d offset a low fee for writing and directing the film (just £96,000) by negotiating ownership of the merchandising rights.

Most observers at the time would’ve thought this was a good deal for the production company. For one thing, merchandising wasn’t the massive business that it’s become since. For another, expectations for Star Wars were pretty low, and underwhelming feedback from early screenings didn’t do anything to change that perception.

Perhaps mindful of this early buzz – or rather, lack of it – one of the biggest toy companies of the time, Mego Corporation, passed up on the chance to produce a Star Wars toy range. Instead, the rights went to Kenner, though it can hardly be praised for any great amount of foresight. Kenner was so unconvinced that the film would be a success that it was wholly unprepared for the enormous toy demand in the Christmas period following the film’s May 1977 release.

As a result, Kenner took the infamous decision to sell kids a dubious ‘Early Bird Certificate Package’ – essentially an empty box containing an IOU. The delivery of these figures would occur in not-so-early 1978.

Related: Can you beat our ultimate Star Wars quiz? 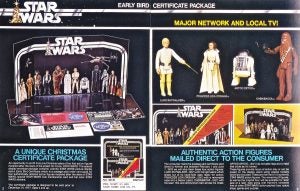 The four initial figures under the offer were Luke Skywalker, R2-D2, Princess Leia and Chewbacca. Eight more joined when the figures were ready: Obi-Wan Kenobi, Darth Vader, Han Solo, C-3PO, Stormtrooper, Death Squad Commander, Jawa and Sand People, with the first ever vehicles and playsets following later in the year.

Kenner went with 3.75-inch figures, which were much smaller than the usual 11.5-inch size. These were much cheaper to produce – an important factor during a time of oil crises.

1979 saw Kenner releasing a Boba Fett figure – remarkable at the time, given that the mysterious bounty hunter wouldn’t be making his first proper appearance in The Empire Strikes Back for another year, but setting a trend for future Star Wars films. Fett’s arrival on toy shop shelves was preceded by a distinctly modern-sounding health-and-safety scare, when it was decided that his sprung rocket launcher was an accident waiting to happen.

Kenner’s hasty solution was to glue the rocket in place on each figure – a decision that attracted the ire of an already fanatical fanbase. To this day, rare examples of a free-firing Boba Fett toy attract some of the highest prices. We’re talking upwards of £1,300.

Once the hype and attention surrounding Return of the Jedi wrapped up in the mid ’80s, the Star Wars toy business entered a 20-year lean spell, with Kenner wrapping up production of the line altogether in 1985. Regular Christmas TV repeats, video games, and other spin-off media would keep interest and sales ticking over.

It’s estimated that over 300 million Star Wars action figures were sold between 1978 and 1985.

There is another Skywalker

In the mid-’90s, the Star Wars hype began to pick up again. Confirmation that George Lucas was making a new trilogy was followed by the re-release of the three original films in a special ‘enhanced’ format in 1997.

To capitalise on the fresh buzz, Kenner (now owned by Hasbro) decided to launch a new range of original-trilogy Star Wars toys in 1996. Still subscribing to the 3.75-inch size, these so-called ‘Power of the Force II’ figures were poorly articulated, with wide stances that meant they couldn’t sit in any of the Star Wars vehicles from the very same range.

Worse, they were given a new pumped-up body style more in keeping with the comic book and cartoon heroes of the time, while the facial features bore little resemblance to the original characters. The Princess Leia figure, in particular, became infamous for its monkey-like face. Suffice to say, they did not go down well with fans.

Also around this time, Lucasfilm launched an ambitious multimedia project called Shadows of the Empire, which included a novel and a popular Nintendo 64 video game. The story slotted in between The Empire Strikes Back and Return of the Jedi, and Hasbro released a line of new figures and vehicles to accompany it.

These expanded-universe figures continued for the remaining years of the decade, and in 1998 Hasbro wisely scrapped the beefed-up body types ahead of the launch of the prequel trilogy.

One lingering issue that had affected all of the 3.75-inch Star Wars figures since their original release was articulation. The only meaningful improvement since 1978 had been that the figures could now turn at the waist. Signs of improvement finally appeared in 1999, when Hasbro launched a stormtrooper model with articulated joints. 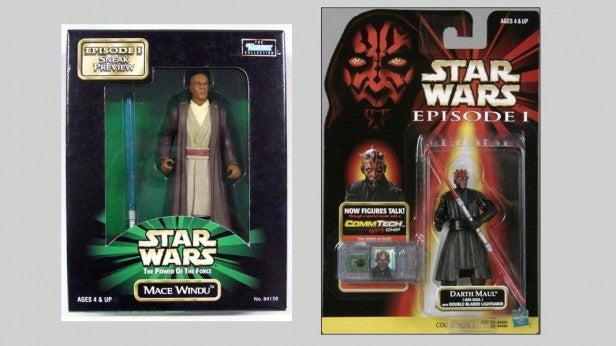 But the real big news had come a year earlier, when Hasbro released a couple of initial figures in advance of Star Wars: The Phantom Menace. No-one knew who Mace Windu was, but they knew he was a Senior Jedi Council member with a blue lightsaber (which would turn out to be purple in the second film, but still…) and an uncanny resemblance to Samuel L. Jackson.

Oh, the other figure was a battle droid, one of the PG-friendly slapstick baddies that blighted the first film. Moving swiftly on…

As 1999 rolled around, Hasbro switched focus fully from the original trilogy to Episode I, with a new series of figures covering the new cast of characters. These figures included the CommTech chip stands that had been introduced the year before with the last of the original efforts. These stands could be placed on a special reader device, which would then play some of the related character’s dialogue from the movies.

For example, as the Star Wars website relates, the Anakin Skywalker figure spouted “Wizards!” (for some reason), “I’m a person and my name is Anakin”, and “I know we’re in trouble, just hang on!”. Hours of fun for all the family.

Disappointingly, however, Hasbro reverted to the earlier poorly articulated design – though it at least stuck with the more naturalistic body shape of the originals. No buff jedi this time, no siree.

Hasbro would again experiment with superior articulation in 2004, two years into the Episode II: Attack of the Clones line. Once again, it was a trooper that received the benefits of this ‘super articulation.’  This time it was a Clone Trooper, and it was even more posable than the previous effort.

The success of this articulated model would see greater flexibility extended throughout much of the Episode III: Revenge of the Sith line from 2005. The first four ‘preview’ figures released in advance of this, the final ever Star Wars (or so we all thought), were General Grievous, Tion Medon, R4-G9, and a Wookie Warrior, and Hasbro also released Anakin Skywalker’s Episode III Jedi Starfighter.

There are more varieties of Star Wars toy than we have time or space to talk about here (or probably ever), but one additional variety of Star Wars toys that deserves a mention outside of the main action figure line is Lego Star Wars.

This curious brand mash-up as been a thing since 1999, would you believe, back before we knew about Hayden Christensen and Vader’s “Nooooo!” Ah, innocent times.

It might sound strange that the two brands didn’t meet before, but at the time it was highly unusual for Lego to release licensed products like this. In fact, Star Wars was the very first intellectual property that Lego embraced, setting the template for the Marvel, DC, and other tie-in brands we see today. 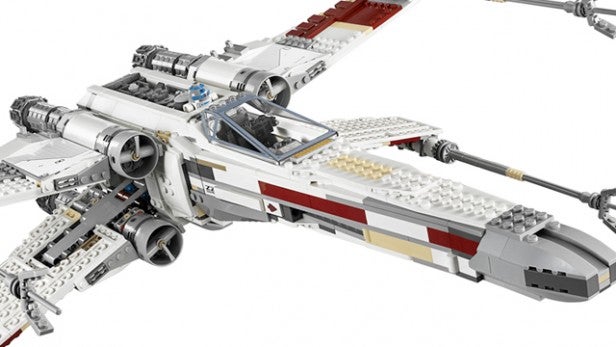 The first Lego Star Wars sets were based on a combination of Episode I (eight sets) and the original trilogy (five sets). The latter included the first ever Star Wars X-Wing. The range has since expanded to include dozens of self-assembly vehicles, mini-figures, and playsets.

Interestingly, just like the action figure range, the Boba Fett minifigure is said to be one of the rarest and toughest to obtain. What is it with that guy?

The Lego Star Wars brand has been a huge success throughout the 21st century to date, which is handy given that the action figure market isn’t what it used to be. It even spawned Traveller’s Tales’s hugely popular video game series in 2005, which is still going strong today.

And would the much-loved Lego Movie have been what it was without the branding synergy (sorry, awful phrase) pioneered by Lego Star Wars? We somehow doubt it.

Fall of the Empire

Back to the main action figure line, and in the boom years following the end of the second trilogy, Hasbro capitalised on nostalgic pining for the original trilogy by releasing new versions of the early figures.

These toys have benefited from the increased detailing and articulation of the more recent efforts, as well as a step up in material quality. Out went the tacky vinyl cloaks, in came proper cloth.

Interest in Star Wars has been kept among younger generations, too, with the successful Clone Wars animated series in 2008 spawning its own range of toys.

In more recent years, interest in action figures has dipped, and Hasbro has been forced to cut the size and quality of its Star Wars toy output. Or at least, it did until the announcement of Star Wars: The Force Awakens and its related spin-offs ramped things back up again. But that’s a whole other toy story, and one that’s still to be written.

Got any particular favourite Star Wars figures? Let us know in the comments section below