These are the most inventive and downright ridiculous limited edition smartphones ever released.

Not since the days of the Nokia 3310 and its interchangeable fascias have we been able to enjoy true handset individuality. Now, with every other phone being either an iPhone 6S or Samsung Galaxy S7, it’s getting harder to make your most beloved bit of tech stand out from the crowd. Sure, you can wrap it in a case, but who wants that added bulk, really?

“I am Batman!” “No, Jeff, you’re not, please, just take off the mask, it’s embarrassing.” If your friends are always hating on your affinity for all things Batman and refuse to go out with you in your fifth superhero-themed t-shirt of the week, you can express your love for Robin’s boss in a more subtle, techy way. 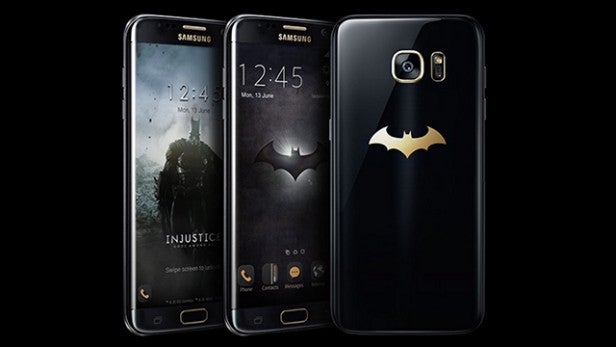 Batman isn’t the only superhero to have been given the limited edition Samsung smartphone treatment. Before the DC Universe got in on the act, Marvel’s Iron Man had been immortalised in handset form too. As well as a red and gold colour scheme and Iron Man helmet etched into the rear of the device, the phone came with a wireless charging pad brilliantly styled like Iron Man’s mini Arc Reactor. 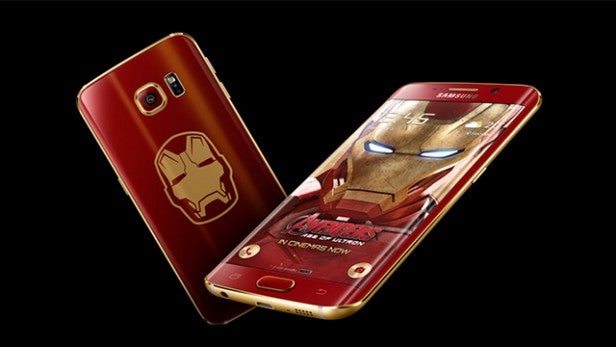 There’s been plenty of limited edition iPhone mods over the years, and gold-loving tech modder Stuart Hughes has been responsible for many of them. While precious metals such as gold and platinum have been used extensively, Hughes mixed things up in 2010 with something a whole lot more special, and even harder to come by – an actual dinosaur tooth mixed with a bit of meteor rock, seriously. 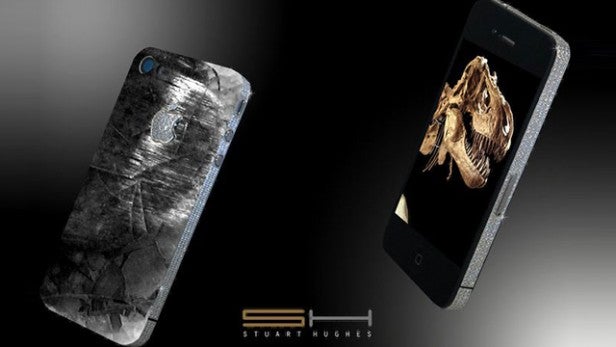 Looking like it came straight out of a blingtastic version of Jurassic Park, the iPhone 4, with its 5-megapixel camera and A4 processor was backed with an actual T-Rex gnasher as well as the usual array of diamonds and gold. With a £40k asking price, it was truly a phone to make John Hammond envious.

The HTC One M8 was, dodgy camera withstanding, one of the best smartphones available when it dropped back in 2014. Its impressive combination of oodles of power and sleek, Sense-skinned UI, put it up there as a true iPhone topper in a shaky year for Samsung. HTC then went and upped the phone’s already stunning smooth, rounded metal design with the limited edition X PHUNK model. 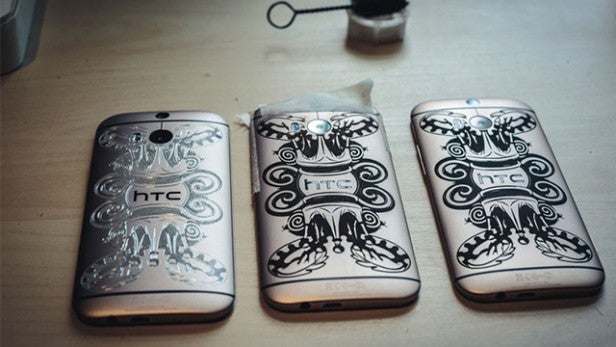 Featuring an engraved back tattoo worthy of any skinny jean-wearing, man bun-sporting Brit abroad, the PHUNK Studio collaborative design gave the crisp, clean phone a bit of an edge. Sadly, only 64 units were ever made and they spent more time in galleries than people’s pockets. Of the 64X PHUNK M8s, 32 were coated in silver, with the other half covered in gold.

Most of the limited edition phones on this list you’d still be happy to sport to this day. The Samsung Matrix Phone, however, well, not so much. Created to coincide with the second film in the Matrix trilogy, the SPH-N270 was a plastic-fantastic monstrosity that, although good enough for Neo and the gang, wasn’t exactly easy on the eye. 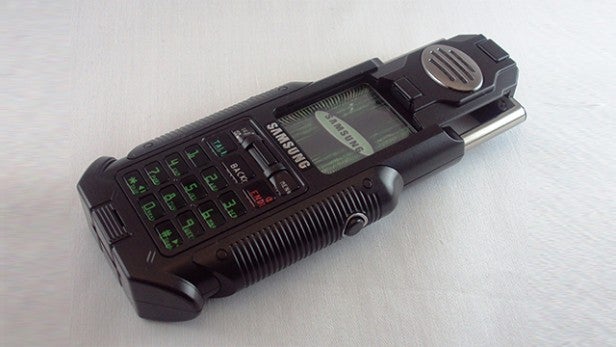 Having dropped in the pre-iPhone era, its dumbphone specs are pretty basic, with a 1,000mAh battery one of the highlight features alongside a physical keypad and the ability to store up to 300 contacts – settle down now. All that’s left is to decide on either the red pill or blue pill.

Although ‘limited’, some limited edition handsets are still available in considerable numbers. That wasn’t the case for the HTC One M8 MOBO Edition. Unlike its X PHUNK sibling, this phone was limited to just five units, none of which you could buy, like, ever. 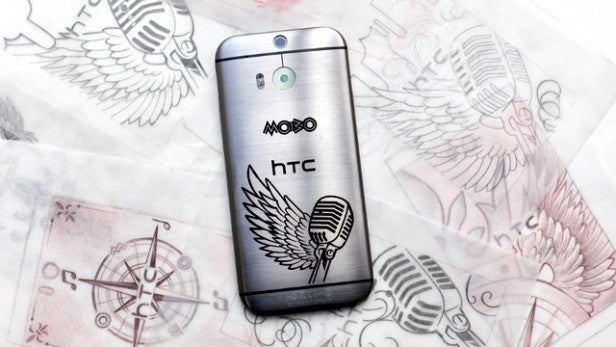 While four of the phones – which featured a vintage microphone motif and MOBO’s logo etched into the backplate – were handed out by the manufacturer to competition winners, the final unit was presented as a prize to the Best Newcomer at the 2014 MOBO Awards (Ella Eyre in case you were wondering).

With their wallet-crippling asking prices, Vertu’s phones aren’t exactly accessible to the masses at the best of times, the Vertu TI Ferrari is even more exclusive than its often jewel-encrusted siblings, however. Launched back in 2013 to coincide with the drop of the Ferrari F12berlinetta, it featured similar styling to the supercar, with Alutex-crafted curves and a back hewn from the same leather as the car’s seats. 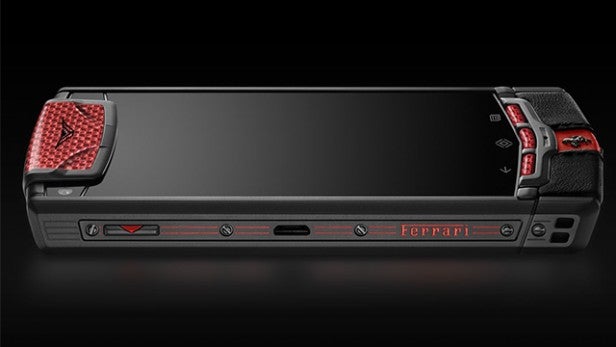 While its looks might have been straight out of the halls of Harrods, it’s spec sheet was a little lacking, especially given its $16,309 (£11,271) asking price. The 3.7-inch display boasted a lowly 480 x 800 pixel panel and the Android device was finished off by a 1.7GHz dual-core processor, 1GB of RAM and an 8-megapixel camera. Oh, and access to Vertu’s trademark concierge service.

The ultimate in limited edition smartphones, the Black Diamond iPhone 5 was the world’s most expensive handset when it first dropped in 2013, and its mind-bending £10 million asking price has yet to be eclipsed. Built around the foundations of Apple’s iPhone 6 predecessor, it featured no spec upgrades despite its lofty fee. 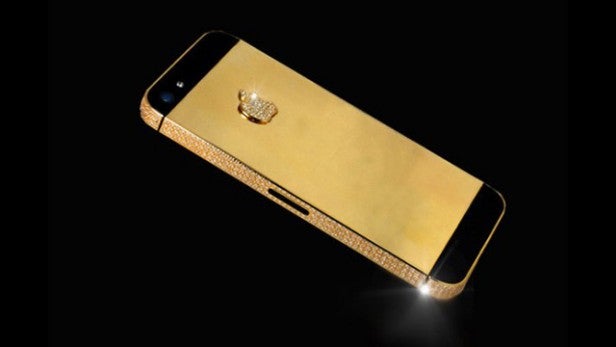 What this one-of-a-kind phone does offer, however, is an unrivalled level of bling, with precious metals and stones stuck to every inch of the compact handset. Built for a Chinese businessman to use as his standard handset (seriously) the phone features a 24ct gold body with a 24ct black diamond replacing the phone’s home button. Not fancy enough? How about the further 600 flawless white diamonds used to finish the phone’s edge or the 53 diamonds the make up the rear Apple logo?

OK, next to gold, diamonds, and dinosaur teeth, a bit of red plastic might not seem like a big deal, but when the BlackBerry Z10 Developer Edition reared its head, this angry hue was a giant slap in the face to the nearly exclusive black and white handset options at the time. 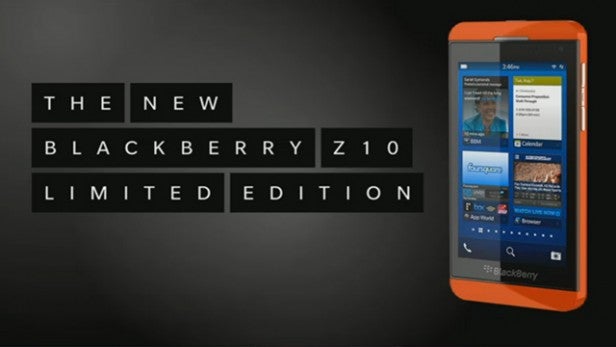 A phone that sparked renewed excitement around BlackBerry at the time, the Z10 boasted a 4.2-inch HD display, 1.5GHz dual-core processor and an 8-megapixel camera. Sadly, as its name suggests, this phone was only ever available to those committed to making BB10 apps – probably not the wisest choice in hindsight.

Got any other suggestions for coolest limited edition smartphone of all time? Let us know in the comments.