The Alienware UFO is without a doubt one of the most interesting bits of kit to appear at CES in years.

For those that missed it, the Alienware UFO is a concept design gaming PC with a distinctly Nintendo Switch like form-factor, featuring a main tablet body and two attachable, Joy Con-esque, controllers that clip onto its sides.

As we noted in our hands-on review, the design oozes potential offering PC gamers an, on paper, all-in-one games console that can be used on the move and at home, but without the limitations of Nintendo’s proprietary, closed software and ecosystem.

Which is why we here at Trusted Towers outright salivated at the the idea when we first saw it. But, with Nintendo rumoured to be working on a new, more powerful version of the Switch and the PS5 and Xbox Series X set for release by the end of the year, even if the UFO does appear as a fully fledged consumer product, it’ll have some pretty stiff competition.

Even with the stiff competition, I can’t help but think there’s space for the Dell UFO – or at the very least a device like it – if Alienware makes a few key refinements. With that in mind, here’s 5 things the UFO could do to carve its own niche in 2020’s competitive gaming scene.

On paper the UFO is awesome an awesome concept. It’s a fully functioning Windows PC with a custom Switch design that lets you play games from every store on the OS. With that in mind, one of the only concerns we had when testing it is how much it will cost. The tech in the demo unit we saw was hardly cheap, and we can’t see the concept UFO selling for less that £800, even if Alienware manages to mass produce it.

Which is why, for Alienware to succeed and make it a full-fat consumer product, it’ll need to take a page out of parent company Dell’s book. Specifically, it should offer the device with multiple customisation options, letting you pick which CPU, GPU, SSD and screen resolution you want.

This would let gamers tweak the PC to meet their exact needs – if the buyers just plans to play basic 2D indie titles or play MOBAs on the move they won’t need to invest in a top end Intel i7 or RTX series GPU. It’ll also let Alienware sell cheaper versions of the device that are at the very least competitive with its more established Nintendo, Sony and Microsoft competition.

The timing would also match up nicely with Intel’s Xe Graphics roadmap. The company unveiled its new Tiger Lake CPUs, with Xe integrated graphics earlier at CES claiming the chips will easily play most games without a dedicated GPU. If true this would make them an ideal option for the UFO.

PC gaming has traditionally been a little complex and confusing for console gamers, requiring them to know what hardware they have and understand graphics settings. The flipside of this is that PC gamers have access to a much larger library of titles, multiple storefronts and control over games settings and graphics. All this is great, but to succeed as a mass market Switch rival, the UFO needs to simplify PC gaming.

Alienware has already partially done this, creating a custom launcher that offers quick launch shortcuts to every installed game, regardless of if you have it on Steam, Epic or uPlay. But it needs to take this added simplicity to the next level and make the UFO offer the same plug/download and play experience offered on consoles.

It could do this by taking a page out of Nvidia’s GeForce Experience playbook, making it so the launcher auto-optimises games graphics settings to meet the UFO’s hardware. 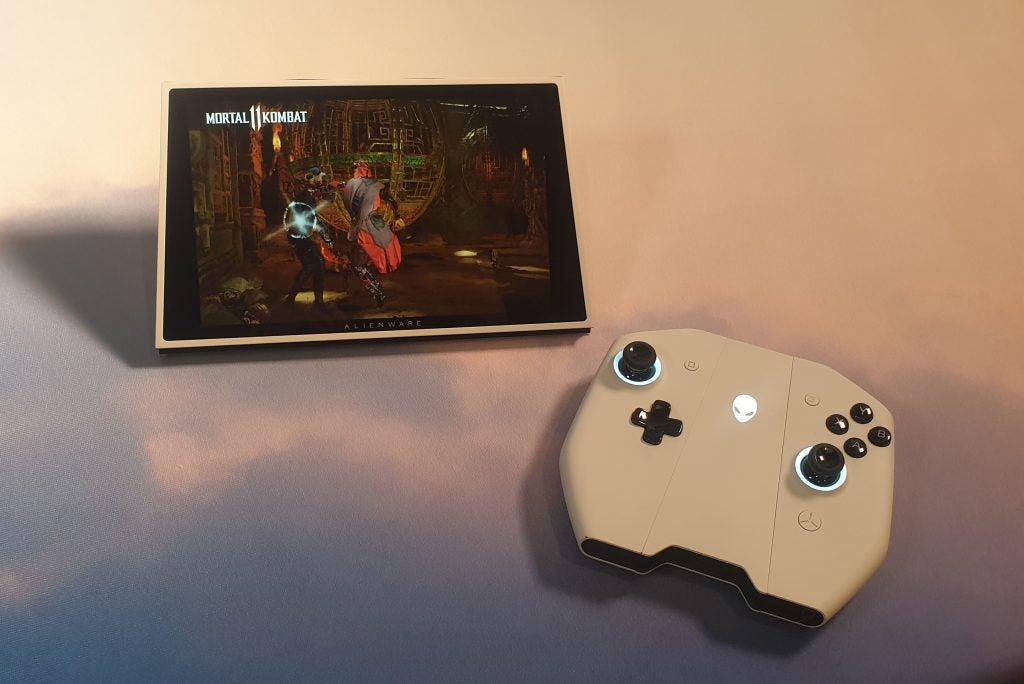 There was a time when the concept of an external GPU confused gamers. But these days, thanks to the arrival of key products from the likes of Razer, they’re not quite as rare in the world of PC gaming as they used to be. Nintendo’s also done a great job getting console gamers used to the idea of docking their tablet when playing at home – though sadly the dock just overclocks the console’s Tegra graphics, rather than boosting them with a more powerful eGPU.

Which is why we think the UFO should combine the two ideas and offer the UFO with a dock featuring an eGPU. This would let gamers turn the UFO into a fully functioning lounge games console with better graphics, and also potentially let you use it as a regular Windows 10 PC – which would make it significantly more versatile than the Switch, PS5 and Xbox Series X.

Alienware should build the UFO as an ongoing platform where the dock and controllers work with every version of the main tablet. Ideally, the firm would also future-proof the console, meaning future versions of the UFO can use the same connectors, removing the need for buyers to repurchase them every time they get a new tablet. In a perfect world Alienware would also make the currently fictional dock upgradable and let you swap out the GPU when you feel like it.

It may be a buzzword at the moment, but 5G connectivity is another key area the UFO could differentiate itself. Thanks to Lenovo, we know it is possible to create 5G Windows 10 devices – though the chips currently used are not good enough for gaming.

If Alienware could find a way to load the UFO with a top-notch CPU and 5G connectivity it would offer three key benefits.

First, it would let you quickly and easily download games on the move, thanks to the networking tech’s advanced, gigabit-per-second download speeds. Second, it would let players game online while on the move without having to connect to dodgy public Wi-Fi. Third, it would open the UFO up to key cloud services like Google Stadia, GeForce Now and Project xCloud.

These would in turn remove the need for the UFO’s tablet section to feature top end local parts, driving down cost and making it an even more enticing offer for serious gamers looking for an all in one mobile and console games console.