OPINION: One of the biggest tech trends of the moment is the smart watch. Samsung has just launched one – the Samsung Galaxy Gear. And so has Sony, in the Sony SmartWatch 2.

However, I still can’t get my head around why any person… scrap that, any normal person would want to buy one.

5. Their battery life is a learning curve too steep for most

We were hoping for some kind of battery revelation with the next round of smart watches, but it did not appear. Use them constantly and you’d be able to measure the stamina of the SmartWatch 2 and Galaxy Gear in terms of hours, rather than days.

In reality, you should be able to get a few days out of them – primarily because there’s no real need to use them all the time. They can’t play games and the apps they do have are little more than crappy little satellites that need to communicate the mothership apps that live in your phone.

However, the average person is not going to be happy with having to charge their watch almost as often as their phone.

4. They’re not much cop as sport watches

You could argue that a successful niche kind of watch, the sport watch, is no different. Use something like a Garmin Forerunner watch for its intended purpose and it’ll run out within hours.

The main issue is that a GPS sport watch is a product made for an enthusiast audience that’s willing to make concessions because what a GPS watch does is really quite special. Before the days of such things, it was pretty much impossible to map your runs, your cycling routes, with anything approaching such accuracy.

A smart watch like the Samsung Galaxy Gear is not really an enthusiast device. It’s for your average   gadget fan with slightly too much money and far too much time to spend reading up about such things.

These devices don’t work well as the enthusiast devices they may appear to make obsolete, either. Manufacturer specs suggest that neither the SmartWatch 2 nor the Galaxy Gear have GPS – they have a pedometer, and that’s about it.

So either you make do with the fidelity of something like a Fitbit, or take a phone with you – which does have GPS. And running with a Galaxy Note 3 in your pocket just isn’t a good idea. 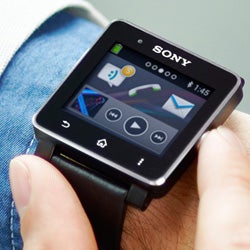 Rubbish battery life is a hurdle these new smart watches have to deal with, but a more basic social problem is the issue of using the thing. In public.

Samsung boasted that you can hold up your arm as if you were holding a phone, to make a call, when wearing a Galaxy Gear. The problem they seem to ignore – you won’t be holding a phone, and therefore will look like you’ve just escaped from a nearby secure facility.

But, yes, I am putting the use of a smart watch as a phone in the same box as these social sins.

2. They cost as much as a good phone

Then there’s the price. The Sony SmartWatch 2 and Samsung Galaxy Gear are not disastrously expensive. The Sony is around £130, the Samsung $300 (so around £300 knowing our luck.)

However, they are not impulse buys, and for most people the purchase of a smart watch will be hard to justify. Here’s the rub – are phones really that inconvenient? They whole point of a convergence device is that it is convenient, and time-saving. The smartphone is already the ultimate convergence device.

One excuse for a smart watch is the super-giant phones that are starting to appear, such as the Xperia Z Ultra and the Galaxy Mega 6.3. However, we’re not convinced they have much of a place in the mainstream phone market either. These are phones so big, they don’t even fit in your pocket comfortably. Who wants that?

1. They are probably bad for your mental health

The way we use smartphones is a core part of the way we live today, but that doesn’t mean it’s particularly good for us.

Have you ever tried living without the constant bleep-bloop notifications of a smartphone for a few days? You don’t even need to stop using a phone, just stop the incessant emails, social networking updates and prods from Groupon, Foursquare and a dozen other online irritations.

After the initial feeling of dread that you’re somehow severing a sort of digital umbilical cord, that you’re missing out on the world’s workings, you’ll feel better. Your head will get clearer.

Our brains aren’t really meant to work at the 240bpm staccato rhythm of the internet realm. That’s the real reason why you won’t see me wearing a smart watch any time soon.

Don’t agree? Let us know your thoughts in the comments below.

Next, read our Sony SmartWatch 2 hands-on