Star Wars Episode VII: The Force Awakens is now exactly eight months away, but we’re struggling to cope with the wait. We long for the familiar swoosh of a lightsaber and the rolling sand dunes of Tatooine. If, like us, you’re desperate for the December 18 release date to roll around, then this might help.

The Star Wars universe is a veritable goldmine of sci-fi goodness, so it’s no surprise that it’s inspired generation after generation of scientists and innovators. We’ve rounded up a five of the best bits of Star Wars tech that are actually happening.

But first, why not check out the latest Star Wars Episode VII: The Force Awakens trailer right here:

Check out our top picks below…

Holography is mainly used for communication in Star Wars. We get our first glimpse of the magical tech in Star Wars Episode IV, when Princess Leia hides a message for Obi-Wan Kenobi in R2-D2. The footage was a bit flickery, but if it helped save the universe from the Sith then who are we to complain?

Thankfully, holography is very much real, albeit not so commonplace as in the Star Wars universe. Scientists at MIT recently developed a new way to recreate images in holographic form – just like in Star Wars – for as little as £320. The team said its holographic video monitors can offer full-colour, standard video resolution, and a 30Hz refresh rate. 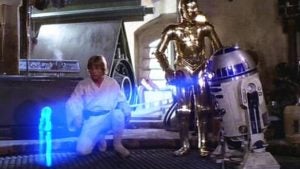 Holography was in the news again more recently after Spanish protesters took to the street’s in optical illusory form, which offered a workaround for the country’s restrictive anti-protest laws.

Then just last week, it was reported that British firm Ultrahaptics had developed a way for us to actually feel holograms. That’s a one-up on Star Wars, eh Lucas? The effect is achieved by producing tactile vibrations, just like the kind you feel in your chest at a loud concert.

For more impressive holography, you need only look to Magic Leap, a Google-backed company behind a mysterious augmented reality headset. It’s still not clear what exactly Magic Leap has in store for us – or even when it’s coming – but the company recently showed off a video that had us giddy with excitement. It showed a man sitting in his office using Magic Leap’s headset, only for the room to be transformed into an interactive sci-fi battleground, complete with laser blasters and angry robot opponents. We won’t spoil the whole video for you; instead, we’ve linked the footage below.

No Star Wars gadget round-up would be complete without lightsabers. The Jedi’s signature energy-sword has become a staple of nerd-dom, and rightly so. We all want one, but can we actually get one?

Well, sort of. Physicists at Harvard and MIT have developed a way of binding photons together. This forms a new molecule that behaves very similarly to lightsaber blades.

“What we have done is create a special type of medium in which photons interact with each other so strongly that they act as though they have mass, and bind together to form molecules,” explained Professor Mikhail Lukin, back in 2013.

Related: Future Tech: Biggest patents and acquisitions of the month 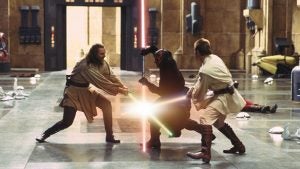 Unfortunately, there are still a number of pitfalls when it comes to make Star Wars-style swashbuckling a reality. Difficulties include creating a short fixed-length blade, keeping size down, powering the high-energy laser, and re-creating the swooshing sound. All this means you won’t be strapping a lightsaber to your Republic-issue belt any time soon. Is somebody chopping onions in here? *Sniffle*

If you can’t wait for lightsabers, you can at least get a Star Wars kick a la robo-companionship. George Lucas’ sci-fi universe is brimming with droids in a staggering variety of shapes and sizes.

Technology can’t quite replicate the banter-bot that is C-3P0 just yet, mind, but there’s already a veritable horde of droids inhabiting planet earth. One such AI offering is ASIMO, Honda’s 15-year-old robot. The latest iteration of ASIMO (2014) can run at 9km/h, sidestep pedestrians, perform sign language, distinguish between multiple voices, and even take the lid off of a water bottle.

Then there’s Toshiba’s fembot Aiko Chihira, which has recently been put to work as a customer service assistant in a Tokyo shopping mall. She can’t make conversation yet, but she can talk about events, sign directions, and unnerve passers-by with her blinking eyes.

Related: Drones in the UK: Where will they fly to next? 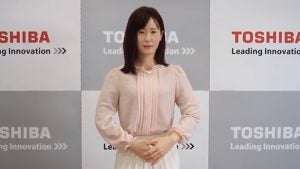 You can even look closer to home to sate your AI hunger. Anyone with a fairly modern smartphone – Nokia 3310s need not apply – will likely have a voice-controlled companion pre-packaged onto the operating system. iOS gets Siri, Google proffers Google Now, and Microsoft’s Windows Phone ships with the Halo-inspired Cortana. They can’t move or help you fend off the Empire, but they’re at least good for a brief chinwag and directions to

It’s not all fun and games when it comes to robots, mind. The Empire’s droid armies often went head-to-head with ‘rebel scum’ adversaries throughout the Star Wars trilogies.

Cloning in Star Wars is used for nefarious and militant means (a la clone troopers), but it doesn’t need to be so. Efforts in the real world to replicate humankind like-for-like is less about taking over the universe, and more about pushing the boundaries of science.

At present, cloning theory largely involves replicating human tissue to help with medical transplants and the like. Actual reproductive cloning is a far more morally and medically challenging issue, and it’s faced plenty of opposition from human rights groups. 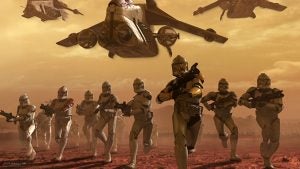 Since we first cloned Dolly the Sheep back in 1996, scientists have been hard at work on reproducing the method with human cells. Last year, however, researchers claimed they’d cracked it. Scientists in Oregon successfully managed to clone an embryonic stem cell from an adult human’s skin. It came with a warning, however – “Certainly this kind of technology could be abused by some kind of rogue scientist,” Paul Knoepfler of the University of California’s School of Medicine said. Yeah, like creating a deadly army of militant clones hell-bent on dominating all life…

Okay, we’ve cheesed this one a bit. The Death Star isn’t actually happening. That’s probably a good thing too. The Empire’s planet-destroying floating city of death makes nuclear warfare look like a jumped up game of conkers.

So deadly is the Death Star, in fact, the White House actually ruled out building one back in 2013. The USA’s science chief Paul Shawcross said: “The Administration does not support blowing up planets.” 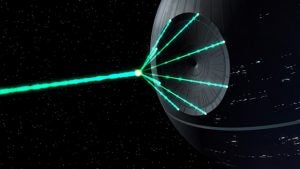 That’s not to say the Death Star can’t be a force for good though. Researchers at the Australian National University have managed to create a Star Wars-style tractor beam that can pull objects over a distance of about 8 inches. Next stop: Millenium Falcon. Elsewhere, US braniacs are currently working on a Death Star-inspired laser that can emit 100,000 times more power than all our planet’s power stations for a fraction of a second in the name of scientific research. Let’s just hope they don’t point it at Alderaan…

If all this Star Wars chatter has got you thirsting for a bit of space opera, here’s the latest trailer for Star Wars Episode VII: The Force Awakens.