While it puts up with snarky comments from rivals RIM possesses two things they all crave: enterprise dominance and BlackBerry Messenger.

Whether they like it or not, corporations around the world are locked into RIM’s enterprise services. Shifting to a new model is costly and, despite recent outages, it still remains without peer in both reliability and security. Consequently millions of employees will be receiving BlackBerry smartphones by default for some time yet with their employers non-plused about individual handset merits. As for BlackBerry Messenger, its huge and loyal customer base has spread wildly and infamously in youth circles and, like the iPod touch, creates brand loyalty and an effective feeder system for future handset sales. Companies may not be willing to take a chance on buying RIM in its current state, but Balsillie specifically mentions “partnership and licensing opportunities” and this could reap rewards.

The image is a tempting one: the hardware expertise of Samsung, HTC, LG, Motorola and Sony (nay Ericsson) producing slim, powerful, well featured handsets with BlackBerry’s business savvy software and BBM (concept below). It would add choice to the boardroom, spice up the dull models currently available and all would compete on price. RIM could even give away BlackBerry OS licences for free to undercut Windows Phone premiums and the rising cost of Android royalty payments. Profits would be earned by making secure email and BBM subscription services. 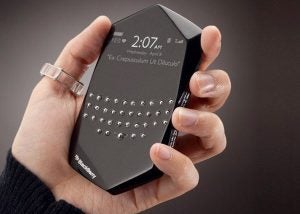 Hurrah, RIM is revived and competition is good! Not quite. For a start no other platform charges for email or messaging so unless manufacturers swallow these costs it seems unlikely anyone other than existing BlackBerry converts would accept it. Secondly the BlackBerry OS is ageing and wrapping it in spiffy new hardware would only highlight its cracks. RIM would inevitably face pressure to have TouchWiz, Sense et al plastered over it further diluting the brand. Thirdly is fickleness. Licensees will only stay while there is a profit to be made and with RIM’s market share collapsing that may only be short term before they jump ship.

Regardless RIM needs to move fast. It won’t go out of business in 2012, but this will be the company’s defining year. The good news is that Lazaridis and Balsillie have finally acted, the bad news is Thorsten Heins will have little time to learn the ropes and a few early stumbles could be all it takes to finally push the company into the abyss…