That’s it, folks – video gaming is officially old. It’s now entering those middle years of its life where hairlines recede and sports cars are just about the only way to feel young again. The milestone we’re talking about here is Pac-Man’s 35th birthday, and we’re sure a soft-top Porsche is waiting just around the corner for our hungry yellow friend.

Yes, Pac-Man first debuted back on May 22, 1980, but it’s as iconic today as it ever was. Research says three quarters of us have played Pac-Man on our smartphones, so ol’ chompy isn’t going anywhere just yet.

But how much do we actually know about gaming’s earliest mascot? Here are 10 surprising facts about Pac-Man to chew on…

Earlier this week, Pac-Man left his pixelly confines and was launched into space. The blast-off was in celebration of his 35th birthday, and his upcoming Hollywood debut.

Yup, Pac-Man is set to star as a lead baddie in Adam Sandler’s ‘Pixels’, a film about classic video game characters terrorising the planet. Wakka-wakka-pocalypse. 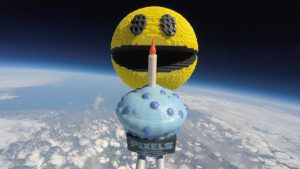 2) He was the first real franchise

A big reason why Pac-Man has retained his popularity over 35 years is because he was first proper game character, pong paddles notwithstanding.

It’s not just Pac-Man that’s grabbed our attention either; he’s got a host of money-spinning Pac-pals, including a wife, two children, and Professor Pac-Man.

When Pac-Man first launched, arcades were dominated by space shooters like Space Invaders and Asteroids. That didn’t stop our banana-hued friend however; Pac-Man went on to become the most successful coin operated game of all time. 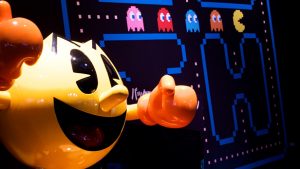 4) The most iconic video game ever?

When he’s not draining your wallet at the local arcade, Pac-Man hangs out in the New York Museum of Modern Art. The prestigious venue has an arcade exhibition about the gaming legend, and claims the game series is the most iconic ever to exist.

That’s no exaggeration; Pac-Man has received a smorgasbord of accolades as a result of his dot-nomming success. Awards include highest-grossing video game, best commercial arcade game, greatest video game, and most influential video game.

He’s a shoo-in for most impressive metabolism too, we’d say…

Pac-Man is a name firmly entrenched in our collective consciousness, but it wasn’t always so. The chompy yellow superstar’s first incarnation was as ‘Pakkuman’, debuting in the Japanese version of the game. The name was derived from a Japanese folk hero called ‘paku’, famous for his insatiable hunger.

For the English launch, Namco decided Puck-Man would be a more fitting title. This decision was swiftly shot down, however, over concerns that people would bastardise the name by swapping the ‘P’ for an ‘F’. Pucking hell…

Thus, Pac-Man was born and Puck-Man has faded into obscurity. That’s probably for the best. 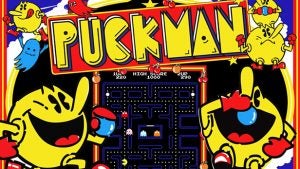 The beauty of Pac-Man is in its simplicity. One advantage of this basic design is that the original game file was just 24KB in size.

Let’s put that in perspective; mobile game Crossy Road currently weighs in at 122MB on our phone. A bigger PC game like World of Warcraft, for example, claims 50GB of space.

Of course, modern games have significantly improved graphics and more complex coding. But it goes to show how a good game doesn’t need bells and whistles to captivate the world.

By the early 80s, we were all gripped with video game mania. Pac-Man was at the fore of this revolution, so everyone and their money-grabbing uncle were looking to make bank on the game.

Two such enterprising enthusiasts were musical duo Buckner & Garcia, who adapted the game into a hit song. Dubbed ‘Pac-Man Fever’, the single made it to #9 on the BillBoard Hot 100 in March 1982, and had sold 1.2 million copies by the end of the year. By 2008, that figure had risen to 2.5 million.

8) He’s the daddy of stealth

One little known consequence of Pac-Man’s existence is that it helped pave the way for the stealth genre. While arcade titles at the time focused on battling adversaries head-on, Pac-Man centred around avoiding enemies. This was a new gameplay dynamic for the time, and helped spawn an entire genre of video gaming.

Millions of us may have played Pac-Man, but
few can claim great success at the game. In fact, only six people in the
world have managed to achieve a perfect game.

That’s when a
player eats every dot, power pellet, fruit, and enemy in one life over
the first 255 levels. Then, they need to score as many points as
possible on the final split-screen level — this can’t technically be
completed due to a software bug.

The first person to manage the
feat was Florida’s Billy Mitchell, who scored 3,333,360 points with a
play-time of around six hours.

The most recent winner is David
Race of Ohio, who cracked a perfect game in just three hours, 41
minutes, and 22 seconds – that’s the fastest time yet. 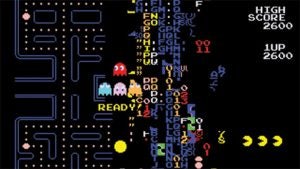 10) He burned the economy for millions

Back in 2012, Google turned the Google Doodle into a playable version of Pac-Man in celebration of the game’s 30th birthday. It was great fun, and impossible to resist for anyone stationed at a computer.

Unfortunately, this popularity proved to be the downfall of the entire planet. Like dot-hungry lemmings, we collectively lost an estimated 5 million hours of work time globally thanks to employees getting their Pac on. Best guesses put the cost to the global economy at around $120 million. Whoops.