Since the advent of home video gaming in the ’70s, we’ve seen a torrent of nutty controllers and peripherals from manufacturers hoping to lure in customers. From classis entries like the Nintendo 64 joypad, right through to Guitar Hero’s new guitar peripheral, there’s been a huge variety in the way we interact with games.

Take, for instance, the newly announced Oculus Rift ‘Half Moon’ Oculus Touch controllers, which look frankly ludicrous. The wireless touch-pads are due to be properly demonstrated at E3 next week, so keep an eye out on TrustedReviews for full coverage.

In the meantime, here’s our round-up of up some of the craziest game controllers – some good, some bad – to demonstrate exactly what sort of madness game studios have cooked up over the last few decades. 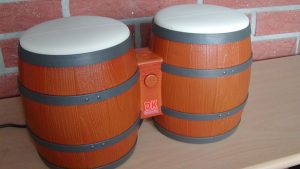 If you had a GameCube then you’ve probably heard of the DK Bongos. This musical bongo-shaped peripheral was the wacky brainchild of Nintendo’s Donkey Kong division. It only worked with four games, which speaks volumes for how spectacularly niche the bongos were.

Nintendo actually designed two Wii titles to work with the DK Bongos, but later opted to scrap the support. Apparently it didn’t want to alienate Wii gamers who didn’t have the controller. Who wouldn’t want bongos?! 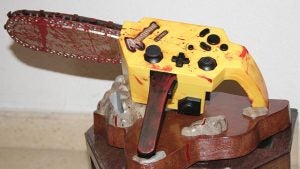 The Resident Evil 4 Chainsaw is the sort of thing that, if you had it as a kid, you need to ask some very serious questions about your upbringing. Launched as a limited-edition release, this controller hoped to give Resi fans a more immersive gaming experience. Perhaps too immersive, we’d argue.

The features list alone reveals just how mad this peripheral is. For starters, it has a pull cord that produces a “blood-curdling” chainsaw noise. Then there’s the rumble feature that’s meant to reproduce an authentic “chainsaw feel”. Each chainsaw also has unique blood splatter artwork; no carbon-copy gore here, folks. Not one for little Jimmy, we’d say. 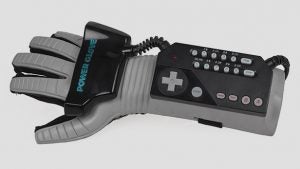 There’s very little to say about Nintendo’s NES Power Glove that’s positive. This thing wasn’t even niche; it was just bad. First launched in 1989, the Power Glove was Nintendo’s attempt to revolutionise game controllers. Unlike the later Nintendo 64 pad, however, the company got it horribly, horribly wrong.

The glove had standard NES buttons on the forearm, as well as 0-9 keys and a program button. You could also perform a variety of hand motions to control your in-game character. Unfortunately, people found it exceptionally awkward to use and thus Power Glove games sold badly across the board.

Wikipedia says it best: “The Power Glove itself was a critical and commercial failure.” 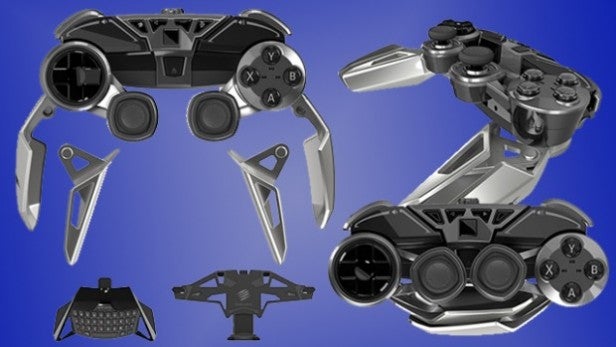 Mad Catz is a prolific peripheral manufacturer, and the L.Y.N.X 9 exemplifies its oddball approach to the market. This Swiss army knife of a controller looks a bit like a PS4 controller with Optimus Prime for a dad. It’s expensive at £250, but that’s the price you pay for extreme versatility.

The controller is built from three core components: a “left wing”, a “right wing”, and the central brain of the device. These bits can be switched around to work with a phone, or join to a tablet stand. It’s also got a built-in keyboard, works as a TV remote, has a mouse control sensor, and wrecks the PS4 pad with its 30-hour battery life. 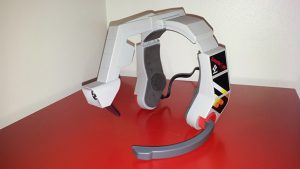 In concept, the Konami LaserScope was brilliant. A space-age gaming headset that responds to voice commands? Sign our ’90s selves up. Unfortunately it didn’t quite live up to expectations.

Konami intended for shots to be fired every time the wearer said “fire!” Sounds simple enough, but reviewers at the time criticised the consistency of the feature. It also meant you spent all day screaming “FIRE” at the telly, which was a surefire way to ramp up concern amongst your immediate family.

It wasn’t all bad, though. The LaserScope had a crosshair eyepiece that sits in front of your right eye, which we reckon was great fun. Pew pew! 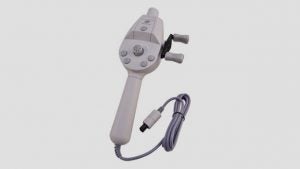 There’s just one maxim that we live by here at Trusted HQ: you can never have enough fishing game peripherals. That’s why we’ve opted to include two such reels in this round-up.

The first is the Sega Dreamcast fishing controller, designed for use with the smash-hit title Sega Bass Fishing. It’s shaped just like a fishing rod, sans the line, and has a handful of buttons. It’s also got motion-sensing tech built in, so it knows when you’re, y’know, fishing. Fun fact: the fishing controller also worked with Virtua Tennis. 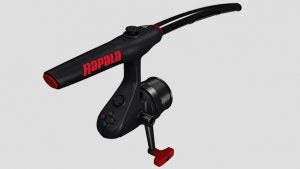 Then there’s the trusty controller rod that shipped with Rapala Pro Bass Fishing. The ill-received title launched (and faded away) just two years ago on Xbox 360, PS3 and Wii U, but its pole accessory lives on in our hearts and minds. The downside? The phallic Rapala rod looks like it would be more at home in a dodgy Amsterdam nightclub than your living room. 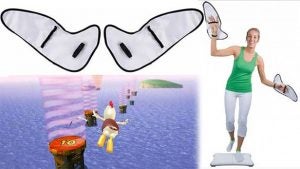 Ahh, the Wiimote. The timeless Wii controller redefined family gaming, and that’s partly down to the staggering array of Wiimote accessories you could buy.

We won’t list all of them, but some of our favourites are the basketball, the bowling ball, the rowing machine, the Wii music pack. Oh, and the wings. How could we forget the wings… 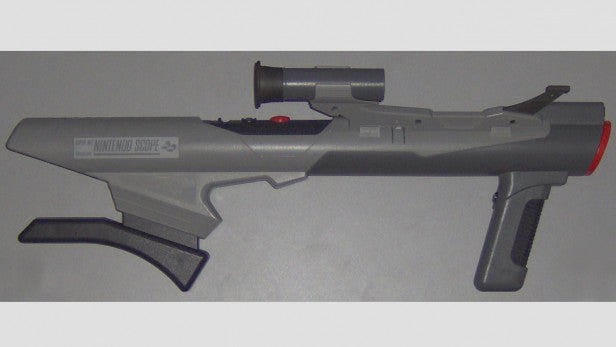 One more from Nintendo here – we’re sensing a theme. Yes, the Japanese firm has another doozy of a peripheral, this time in the form of a light gun. Now while light guns aren’t particularly out there as far as controllers go, Nintendo naturally decided to take it one step further.

A successor to the smaller NES Zapper, the Super Scope is a bazooka-shaped beast that measures about two feet long. And if you hadn’t guessed from the name, it’s also got a scope.

It had its own dedicated game called Super Scope 6, but it also worked with a host of other titles, including Yoshi’s Safari, Bazooka Blitzkrieg, and – oddly – Lamborghini American Challenge. 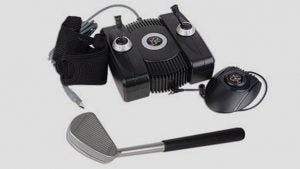 Another Mad Catz offering, albeit slightly older than the space-age L.Y.N.X. 9. The Gametrak was invented back in 2000, and consisted of a weighted base unit that sat on your floor. Two retractable nylon lines connected from this base to your Gametrak gloves, which then tracked your hand movements.

The creator, Elliot Myers, first arrived at the idea for Gametrak while playing with a retractable washing line in a hotel bathroom. Three years later and it was being launched with a first-person fighting game called Black Wind.

It went on to be used for the Real World Golf game, which is where the Gametrak really came into its element. In fact, by the time RWG 2007 launched in 2006 (we know…), over 300,000 Gametrak units had been sold. Ahh, a happy ending. 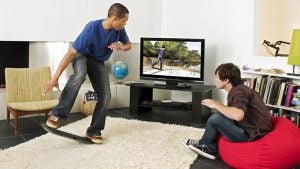 Tony Hawk: Ride launched back in 2009, in an effort to recoup some losses after struggling to compete with EA’s Skate series. The big selling point of Ride was that the player used a skateboard deck peripheral to control the in-game character thanks to a bunch of integrated motion sensors. Players will “put down the control… and feel the sensation of going big,” Activision proclaimed.

Critics disagreed en masse, and Ride is now generally accepted to be the worst entry into the Tony Hawk game series. Reviewers described the board as awkward and difficult to master, but praised it for being “sturdy” – a commendable accolade, if nothing else.

Tony Hawk wasn’t so chuffed with the downbeat response, however. Following negative reviews, he tweeted: “Most snarky critics had their minds set before ever seeing/playing the game. I’m proud of what we created; it’s innovative, responsive & fun.”