As 3D printing becomes more commonplace, people and companies are
getting creative, pushing the boundaries of the technology to do awesome things.

Just yesterday, Mattel announced a partnership with 3D modelling software company Autodesk
that will allow people to customise its products, either via printing
at home or by submitting their own designs to be sent to them.

It’s
still a developing field, of course, and the excitement of being able
to fabricate all manner of items has led to it being used in a variety
of ways as people experiment with and riff on the existing technology.

Here are 10 awesome things people are doing with 3D printers… 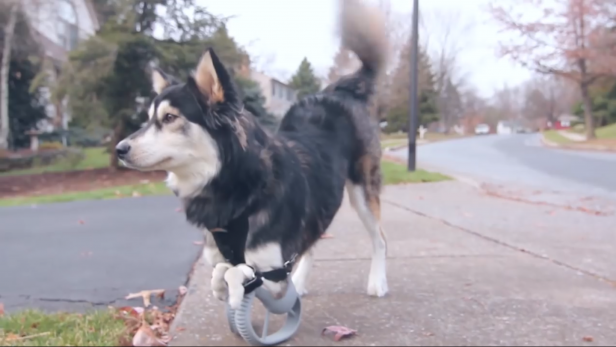 The
ability to customise prosthetic limbs has done a lot for the potential
comfort and dexterity of amputees, but that kind of technology isn’t
limited to humans. This dog, called Derby, suffers from a birth defect
in his front legs, but puts on quite a turn of speed when he’s kitted
out with custom-made attachments.

As he gets used to a set of
legs they can be upgraded to a slightly taller set, thanks to the relatively quick and easy
process of iteration with 3D printing.

3D printing has also helped this tortoise, called Cleopatra, live a better life. Suffering from a condition that means her shell is too soft, which could leave her prone to infection, the staff at Canyon Critters Rescue enlisted the help of Colorado Technical University and the 3D Printing Store in Denver to craft a solution.

After a set of 3D scans and some tweaking of the design, Cleopatra’s shell-protector was made in four parts and over the coming years will need to be replaced with larger versions as she grows. In the meantime, her bright 3D-printed cover means she’s no longer in a half shell, but is definitely still a hero. 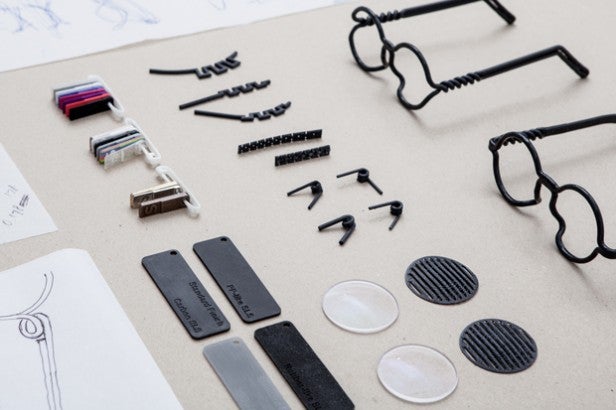 2. Getting the perfect fit – Mono glasses

Glasses
are available in many different styles, but it can be hard to find a
pair that fits perfectly. This Indiegogo campaign for 3D-printed glasses
called Mono wants to change that with a printed-in-one-hit style that
can be customised using precise facial measurements.

Its springy
double-helix arm design replaces conventional hinges, and its lenses
can be easily changed to suit conditions and they come in five styles
– in case you don’t really fancy the Harry Potter look.

Our
hunger for 3D printing is possibly only matched by our hunger for an
eye-catching snack. Former architecture students Kyle and Liz von
Hasseln modified their 3D printer to use a sugar solution and started a
business making elaborately decorated cakes which sold for over $5000 a
time.

Their creation was bought by the company 3D Systems which is due
to release the ChefJet later this year. The ChefJet printer prints
intricate structures out of sugar, chocolate or candy while the Chef Jet
Pro can even print in colour. 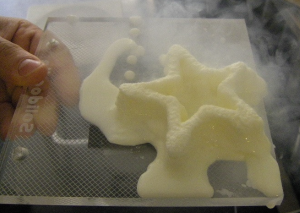 Meanwhile,
some MIT students have hacked together this one that will 3D prints ice
cream using a combination of a soft-serve dispenser and a Solidoodle 3D
printer. It’s not the slickest product, but they hope it will grab the
attention of children and get them interested in 3D printing. 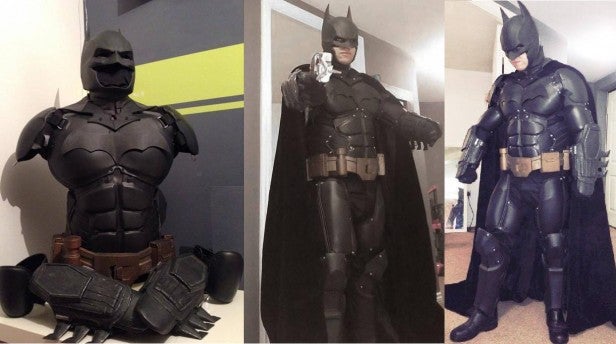 Creating
an accurate replica of your hero’s outfit can be an extremely costly
and time-consuming task. To cut down the expense and time, Stevie Dee of
Crimson Coscrafts teamed up with Gauntlet FX who 3D-modelled the suit
based upon the one featured in Arkham Origins game.

Those designs were
then 3D printed and used to create a mould for the finished article.
It’s still an impressive amount of effort, but we think you’ll agree the results were worth it. 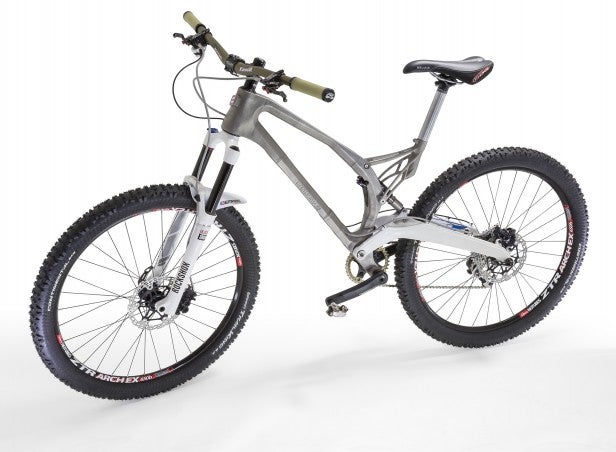 There
have been attempts to make bikes using ABS plastic on some lower end
printers, but the results don’t inspire much confidence in their handling or safety. Instead, UK company Empire Bikes
has teamed up with manufacturing firm Renishaw to produce its first
prototype 3D-printed bike frame from reassuringly strong titanium alloy, using the procedure to help
them refine their traditional manufacturing methods and enable quick
testing of new design refinements. 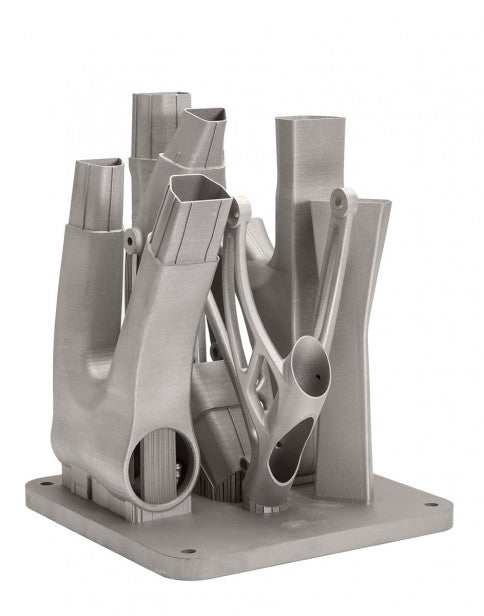 The pieces were printed separately and
then bonded together to form a complete bike frame. The process helped them save weight on their final design, but could also be used to produce custom-fitted bikes in future. 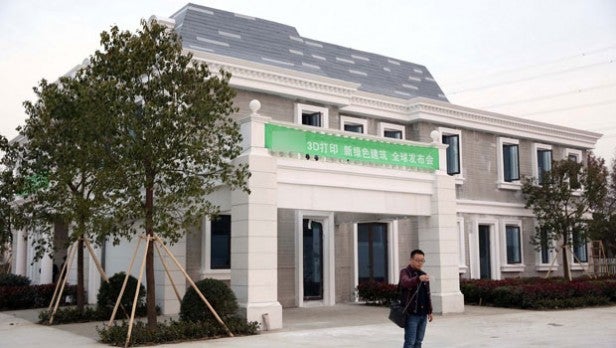 Chinese company Winsun has demonstrated its capabilities with a pair of structures at an exhibition area in Suzhou,
eastern China. One is a 1,100-square metre mansion, the other is a
five-storey apartment block. Both are made with 3D-printed concrete
walls which are then moved into position to form the final structure. 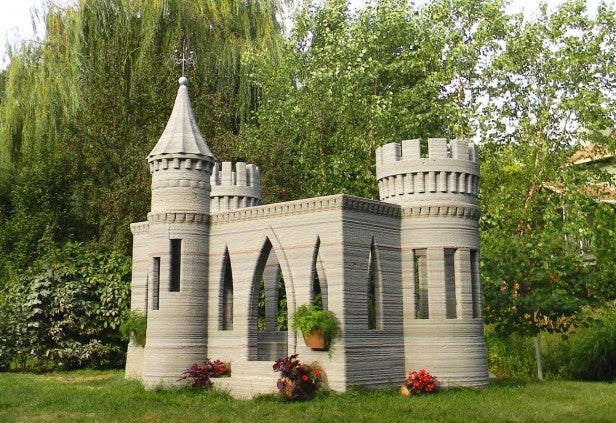 Meanwhile, this back garden castle was almost entirely printed in place in the US – apart from the tops of the turrets and roof. 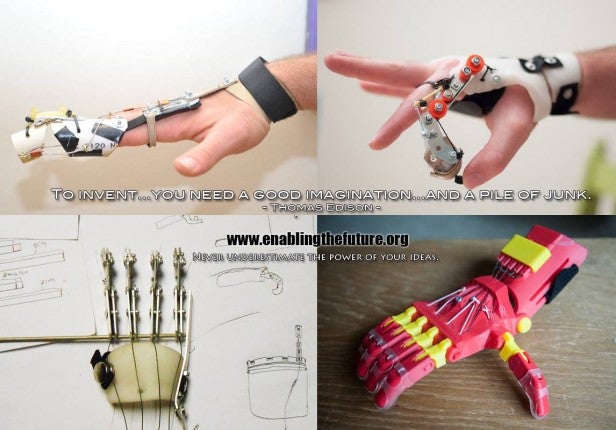 The
e-NABLE project started off as a collaboration between a prop maker
from the USA and a carpenter from South Africa to make a prosthetic hand
for a small child in South Africa. They gave away their designs for
free and it spawned the creation of a community of volunteers designing,
refining and printing fingers and hands for free for those who need
them. 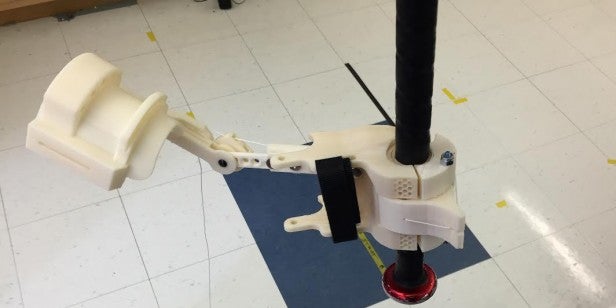 There are even more specialised items being designed, such as this one to help swing a baseball bat. 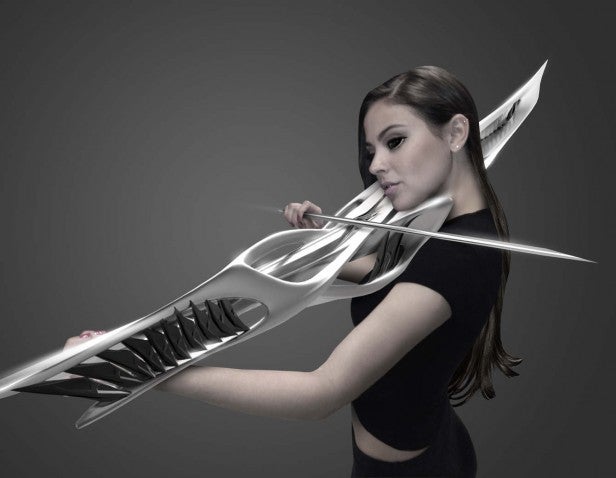 Using
3D printing, Monad Studio created a range of five outlandish instrument
designs for the 3D Print Design Show in New York including a cello and a
didgeridoo. Musicians played all five instruments during the show, as
well the framework that held the instruments – itself another 3D-printed
object that produced a unique drone sound. 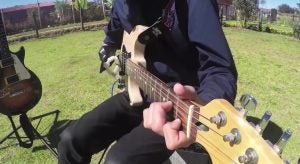 Playing
an instrument is a task that requires a high level of dexterity, so for
many users of prosthetic limbs it is impossible. 17-year-old Diego
Corredor from Columbia had just such a problem which was solved by 3D
designer Juan Camilo Monroy. Through six prototypes, Juan designed a
prosthesis that was up to the task of effectively wielding a plectrum
and allowing Diego to play his guitar at last. 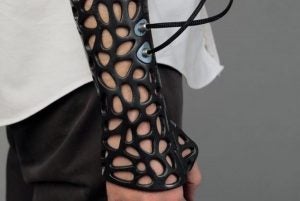 9. Patching you up – Osteoid Medical Cast

While there are medical labs working on the 3D-printing of organs, their internal complexity means that printing a new set of kidneys still appears to be a little way off. Designer Deniz Karasahin has come up with something that we could see in use much sooner.

HIs Osteoid Medical Cast uses 3D printing to make a lightweight, breathable cast structure to help heal broken bones. Importantly, it also incorporates the ultrasound-based LIPUS bone stimulator system which has been shown to increase healing rate by up to 80 per cent. 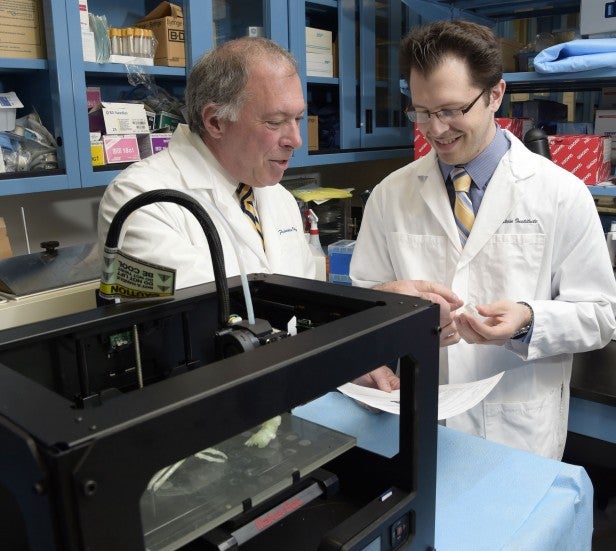 Meanwhile, using a Makerbot Replicator 2X printer, researchers at the Feinstein Institute for Medical Research have been trialling printing an implantable trachea (windpipe) segment to repair damage caused by cancer and other injuries. It’s being printed using PLA bioplastic filament which, as well as being a commonly used 3D-printing material, is already commonly used for surgical implant devices. One extruder prints the PLA plastic, while a modified second extruder prints biomaterial onto the PLA scaffolding which grows into a covering of living cells. 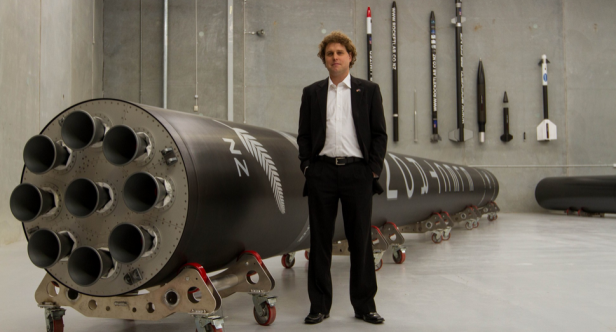 The relative speed of 3D-printing compared to other manufacturing techniques is even helping rockets get off the ground faster. Rocket Lab‘s recently-launched Electron rocket system is designed specifically to bring down the cost of launching satellites into space.

Its lightweight carbon fibre construction and innovative Rutherford engine whose primary components are all 3D printed in metal in just three days and which uses a battery-powered fuel pump system allows for quick turnaround and a reduction of launch costs from around $130 million to ‘just’ $4.9 million.