Zeiss might be better known for the high quality lenses it’s been crafting for well over a century, but that doesn’t mean it can’t come straight out of leftfield with a new full-frame compact camera called the Zeiss ZX1.

The ZX1 isn’t just any old full-frame compact either – it comes packed with innovative features, including a huge 4.3in touchscreen and built-in Adobe Photoshop Lightroom CC.

That’s right, rather than faffing around with sending files to your smartphone or tablet for editing, you can do all of your editing on the Zeiss ZX1 before uploading images directly to social media via Wi-Fi.

Another interesting aspect of the ZX1 is that it has 512GB of internal memory, rather than a memory card slot. According to Zeiss, that’s enough room for 6,800 RAW files or over 50,000 JPEGs, and thanks to the ZX1’s USB-C connection you’ll be able to connect external devices like portable hard-drives to offload snaps.

Naturally, there are some pretty strong optics feeding this promisingly streamlined shooting experience. The ZX1 is fronted by a Zeiss Distagon 35mm f/2 lens – similar to the one of Sony’s RX1 – with autofocus that has apparently been “perfectly matched” to the 37.4-megapixel Zeiss-made sensor. 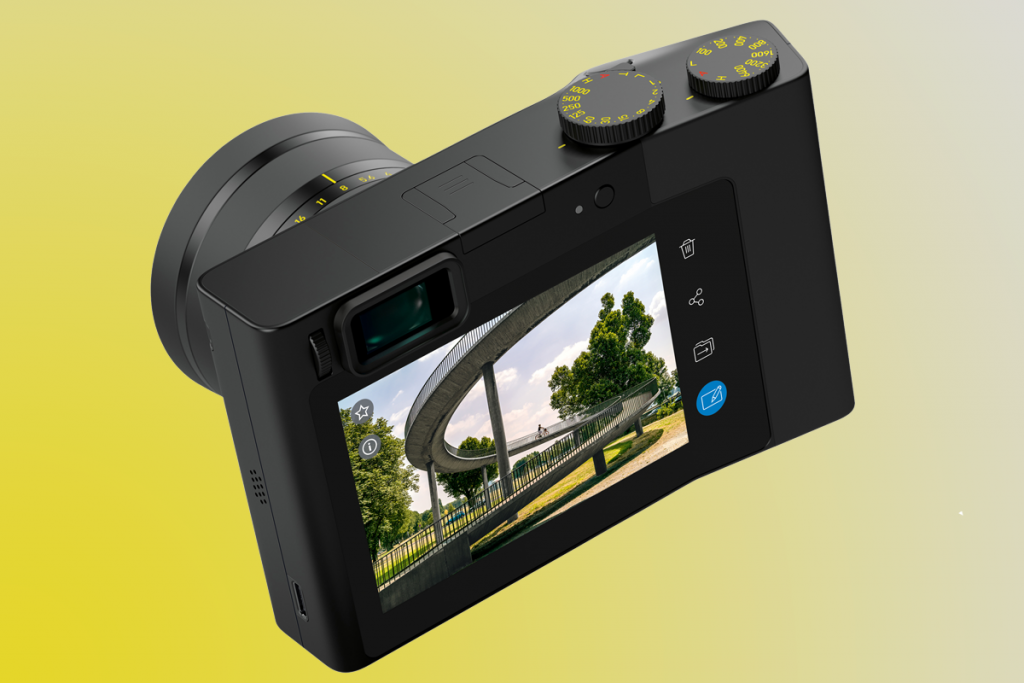 Above the 1280×720 pixel display you also get an 0.7-inch OLED viewfinder with a decent 0.74x magnification. The ZX1 isn’t just a still photography traditionalist either – it can also record 4K video at 30fps (or Full HD at 60fps). And that strange, curved screen apparently helps to separate live view from its touch controls.

The only slight downsides appear to be the lack of in-body image stabilisation and, like many full-frame cameras, a relatively modest burst mode of 3fps.

Aside from the obvious answer of ‘anyone lucky enough to be able to spend several thousand pounds on a compact camera’, the ZX1 is really aimed at anyone looking for a simple, premium street photography tool.

The 35mm focal length is perfect for street snapping, being wide enough for most scenes while getting you closer to the action than your smartphone camera. And while the fixed lens might initially sound limiting, it encourages the oft-mentioned street photography practice of ‘zooming with your feet’.

The obvious rival for the Zeiss ZX1 is Sony’s RX1, although its stripped down ethos perhaps makes it feel more like a Leica Q or TL2. While the latter has a smaller APS-C sensor rather than being full-frame, it too took the ‘smartphone meets compact camera’ idea to new levels, albeit for what will likely be a similarly sky high price tag.

Zeiss hasn’t released pricing info for the ZX1 yet, but says it’ll be available “from early 2019”. We’ll bring you our first impressions as soon as we get our hands on one.

What do you think, do you like the sound of a camera with builtin Adobe Lightroom? Let us know on Twitter @TrustedReviews.