TV-based charity commercials have to work extremely hard to get people to donate. That’s not necessarily because those watching are selfish or can’t afford it, but the path to donation isn’t a smooth one, with lots of awkward hurdles to clear. Online, though, there are considerably fewer obstacles, and now YouTube is rolling out features to make charity fundraising even easier across its platform.

Currently in beta and open to a small number of US-registered 501(c)(3) nonprofits, YouTube Giving lets charities raise donations from within the YouTube app and desktop site. When active – as seen on this video from Hope for Paws – a large donation bar appears underneath the video with a target, the amount raised and a timer showing how much time is left.

For the duration of the beta, YouTube says it will cover 100% of the transaction fees from donations, although the implication there is that this goodwill won’t be a permanent feature. 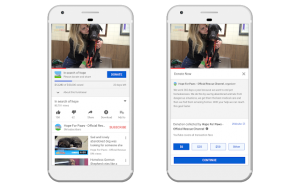 Given YouTube is a community at its heart, parent-company Google also has another feature in beta: Community Fundraisers. This lets multiple content creators co-host the same fundraiser, with a cumulative total raised displayed across all videos. Again, this is only open to a small number of creators and charities for now, but YouTube says that it’ll be making its debut for Childhood Cancer Awareness Month, where 12 gaming creators with a cumulative audience of 37 million people will be raising funds together.

Finally there are two other ways of raising money. Campaign matching will show pledges from other creators and brands as a way of inspiring others to join, while Super Chat for Good lets creators buy a more impactful contribution in live stream chats, but with the money going to the fundraising pile rather than to the YouTuber.

With nearly two billion logged in users each month, YouTube certainly has the potential to make a real difference in the world. If you’re logged in and your card details are saved, then donating really is as simple as a couple of clicks – considerably less friction than regular TV commercials’ best efforts.

The question is how many people will actually see the nonprofit videos to press the donation button. While the Hope for Paws video above has been viewed over 100,000 times, it has just been linked to by Google as an example of its new features. Not every charity will have that luxury.

Of course, YouTube does let regular folks add donation cards to their videos – the feature was rolled out in 2016. But opening the doors for organisations which live for donations is a big step that will hopefully transform an awful lot of lives… if the videos don’t get lost in the 65 years of footage uploaded to the site every day, that is.

Is this the best way for YouTube to do good in the world? Let us know what you think on Twitter @TrustedReviews.