Your smartphone may soon become obsolete as virtual reality headsets come to the fore, according to one industry expert.

A senior executive at Qualcomm, a leading chipmaker that supplies to Apple and Samsung, told TrustedReviews that the main way we access the internet and ‘compute’ is about to change in a massive way. Speaking to us at the CES 2017 convention in Las Vegas, Hugo Swart, Head of Consumer Electronics at Qualcomm, said: “Qualcomm believes VR and AR are the next generation computing platform, from laptops and smartphones, they will go to VR and AR.”

According to Swart, the dominance of smartphones will be reduced as VR and AR technology improves. Eventually, he believes, we’ll use smartglasses to perform the majority of our daily computing tasks, but there’s still some work to be done. He believes that first, augmented reality (overlaying onto a real-world environment) will need to improve to the point where it absorbs virtual reality (simulating an environment) as a category entirely: 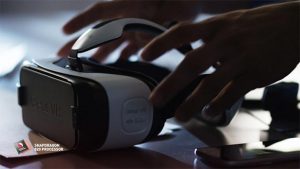 “Virtual reality will actually be subsumed by augmented reality, so you will see that AR devices will support both augmenting what you see plus creating VR environments,” Swart continued, adding that we’re still a little way off his vision: “, but we’re taking good steps.”

He added that it won’t “happy in 2017 or 2018”, but that when we have “something that looks like sunglasses with the computing power to enable VR and AR” then we’re likely to see the transition take place.

Qualcomm actually teamed up with a US company called ODG to launch a pair of AR smartglasses at CES 2017. The ODG R-8 glasses are powered by Qualcomm’s new Snapdragon 835 chip and look just like normal sunglasses, albeit considerably chunkier. Speaking at the announcement, Ralph Osterhout, CEO of ODG, said: “As consumers look for more and more out of their mobile devices, we are seeing a shift taking place towards a new era of mobile computing.” 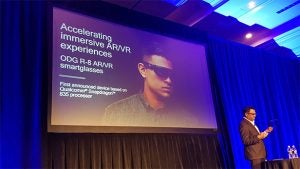 “This is so much bigger than just a device, it’s about a whole new computing medium that will transform how we interact and discover information and engage with people and objects in the world around us,” he continued. “The Snapdragon 835 processor’s superior performance and power efficiency allows us to accelerate along the path we’ve been striving towards for so long – in bringing a self-contained, lightweight and powerful headworn computing device with stunning visual experiences to the consumer.”

Do you think VR and AR will replace smartphones? Let us know in the comments.