Xiaomi announced a European release date for its upcoming Mi 9T Pro handset, but we are still going to have to wait to get our hands on it.

With a post on Facebook, it was revealed that the Xiaomi Mi 9T Pro will arrive in Europe on August 20 — but there’s a catch. That date only applies to the Benelux countries (Belgium, the Netherlands, and Luxembourg), so the rest of us are still going to have to bide our time before we can buy the device.

The post was accompanied with the hashtag #NoMiWithoutYou so we’re confidently hoping that Xiaomi won’t leave us hanging — after all, it’s not like a corporate hashtag could just be a meaningless platitude. 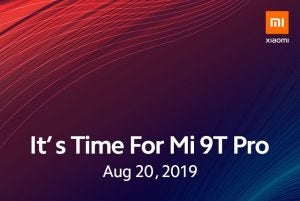 When released, we hope that the Mi 9T Pro manages to build on the great progress made by the impressive Xiaomi Mi 9, to which we gave the full five stars in our review. Not only did that device boast a high performance along with a stunning screen, but the triple camera arrangement offers a particularly versatile shooting experience. With all of these considerable attributes taken into account, its greatest strength was its price which came in at £499 at launch, representing fantastic value for a mid-range phone.

From what we’ve seen so far, the Mi 9T Pro may well meet our high expectations. It runs on a Snapdragon 855 chip with 6GB RAM, so it should have plenty of power for demanding users. The camera remains a triple-lens affair, with a 48-megapixel main snapper, a 13-megapixel ultra wide lens, and an 8-megapixel depth sensor. The screen once again boasts impressive specifications: measuring 6.39 inches diagonally, it has a resolution of 1080 x 2340 pixels. The only question really is whether it’s a big enough step forward compared to the Xiaomi Mi 9.