The Xiaomi Mi 10 has just had its global launch, which the specifications and prices finally revealed. Here’s what we know about the new flagship.

There are three new devices in the range, from an affordable 5G handset to a truly premium-tier smartphone. The official UK prices have not yet been disclosed, but here are the starting prices for each model in Euros:

The Xiaomi Mi 10 will be the first of the brand’s UK products to run on the top-of-the-line Snapdragon 865 chipset, and thanks to the X55 modem it will be capable of 5G connectivity. 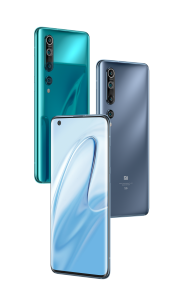 On top of that, it boasts a 6.67-inch AMOLED screen with a 1080 x 2340 pixel resolution, enhanced by a 90Hz refresh rate and an extremely sensitive 180Hz touch sampling rate. There’s a quad camera on the back, which is led by a 108-megapixel wide angle sensor, joined by a 13-megapixel ultrawide lens, a 2-megapixel depth sensor, and a 2-megapixel macro camera. For endurance it’s got a 4780mAh battery (enabled for 30W fast charging).

Meanwhile, the Xiaomi Mi 10 Pro, which will not be sold in the UK, runs on the same processor, has the same screen size, and even has a slightly smaller battery (at 4500mAh). But the big difference lies in the camera set-up; the Pro variant has an 8-megapixel telephoto sensor, a 12-megapixel portrait lens, and a 20-megapixel ultrawide snapper in addition to that 108-megapixel main camera (the same one found on the ultra-expensive Samsung Galaxy S20 Ultra).

We were impressed by the Xiaomi Mi Note 10, awarding it four stars out of five and praising its classy design and camera performance, so we’re looking forward to putting the new Xiaomi Mi 10 up to the test upon its release on March 27.