The Xbox Series X (codenamed Project Scarlett) has finally been unveiled, with Microsoft listing some mighty impressive features of the upcoming console.

There is a sense of uncertainty hanging over the next-gen Xbox though, with some accusing it of already being out of date 18 months prior to release. That’s due to Google Stadia, a new video game streaming service that lets you play video games in 4K on your smartphone, tablet, desktop or TV as long as you’ve got a strong enough internet connection.

With many analysts predicting such a streaming service being the future for video games, is there any point in buying the Xbox Project Scarlett?

Trusted Reviews has pulled together everything you need to know about the Xbox Series X and Google Stadia including specs, release dates, games and more.

Xbox Series X (Xbox 2) vs Google Stadia release dates – When are they coming out?

Microsoft has confirmed the Xbox Series X will arrive Holiday 2020, which translates to just before Christmas next year. That’s quite a wait for Microsoft’s next-gen console.

Google Stadia, meanwhile, launches in 14 countries during November 2019. These 14 countries include the USA, Canada and the UK. That said, only Stadia Pro 4K streaming subscription will be available from day one. You’ll have to wait until 2020 to sign up to the Full HD streaming Base subscription.

Xbox Series X (Xbox 2) vs Google Stadia prices – How much will they cost?

The Xbox Series X doesn’t have any price details just yet, but expect it to be pricey considering all the high-end components. We’ve been speculating on the price in the office, with a wide range of suggestions. The median of our predictions seems to be somewhere around the £500 mark, but it could easily be £100 more expensive.

At launch, Google Stadia will require you to sign up to the Stadia Pro subscription model, which costs £8.99 per month. This will allow you to stream games in 4K, while also giving you access to a library of older games.

If we compare this to our predicted Xbox Series X price, it will take approximately 55 months (4 and a half years) of the Google Stadio Pro subscription for the cash you spent to finally line up with the cost of Microsoft’s console. Of course, this isn’t a totally fair comparison, as it ignores Xbox Live Gold, the possible difference in game prices and the Google Stadia Founder’s Edition, which isn’t a compulsory purchase, but will bag you a Chromecast Ultra, a Night Blue Stadia Controller and a three-month subscription for Stadia Pro.

If you’re not bothered about a 4K resolution, you’ll be able to subscribe to the free Base Stadia subscription come 2020, which sees games streamed in Full HD. Of course, you’ll still have to purchase the individual games, so it’s not entirely free, but it’s a lot more cost effective than the Xbox Series X in the short-term.

Xbox Series X (Xbox 2) vs Google Stadia specs – How powerful will they be?

During the Xbox E3 2019 conference, Microsoft revealed extensive details about the Xbox Series X’s performance power. Running via an AMD Zen 2 CPU and AMD Navi GPU, the next-gen Xbox console will have 8K capabilities (although this is likely upscaled rather than native), will see frame rates soar to 120fps (likely to be when running in Full HD, but unconfirmed) and will feature real-time ray tracing, which renders more authentic lighting effects and reflections.

The Google Stadia Pro subscription, in comparison, sees a resolution up to 4K and a frame rate performance up to 60fps. There’s a big caveat here though, as you’ll need an internet connection with a download speed of approximately 35 Mbps to ensure you’re playing games with the best visual fidelity that the service offers. That’s below the UK’s average internet speeds, and could be an issue for those who live in rural areas. The Xbox Series X doesn’t have that issue – all you need is a 4K TV and you’re good to go.

Google Stadia also seemingly lacks high-brow features such a real-time ray tracing. We’re banking on Google updating the service to support this technology in the future, but that could very well be exclusive to an even more expensive subscription, and you’re unlikely to be getting it at launch. 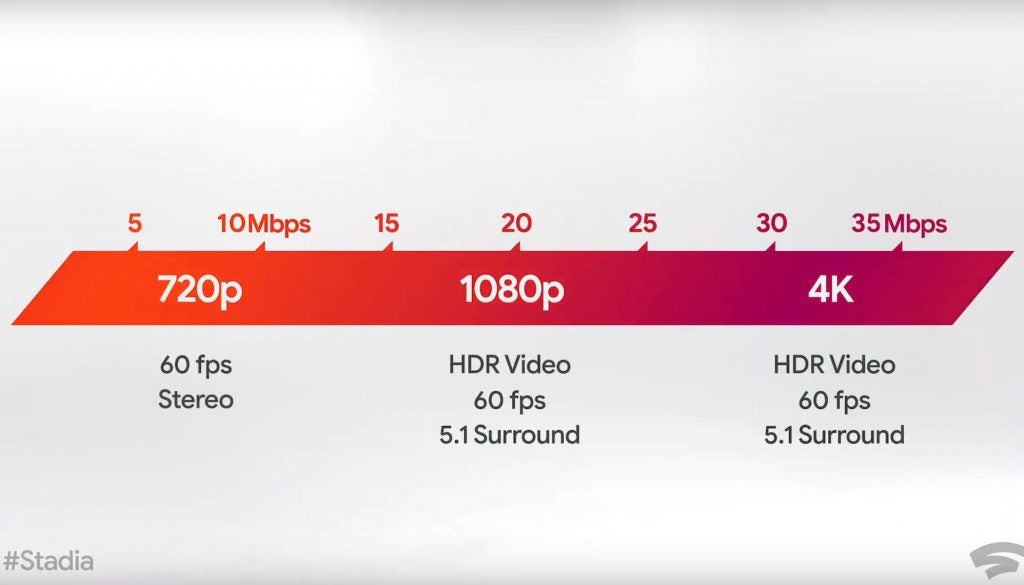 Microsoft also made a big deal over its ‘next-gen’ SSD for the Xbox Series X, which should see loading times drastically reduced. We’re unsure whether Google will be offering a similar performance right now, but at the very least you won’t have to worry about sitting around for update installs as that’s all handled by the server.

The trick up Google’s sleeve, of course, is that you’ll be able to play Stadia on multiple devices, from Android tablets to Pixel smartphones to your low-powered laptop, as long as you’ve got a great internet connection. The Xbox Series X isn’t afforded such luxury. You’re going to be rooted to the hardware, although the upcoming xCloud may change this in the future.

Xbox Series X (Xbox 2) vs Google Stadia games – What games will be available?

Microsoft has only confirmed one title for the Xbox Series X, and that is Halo Infinite. That said, during the Project Scarlett reveal, an Xbox representative did say you’ll be able to bring your current games forwards to the next-gen console, which potentially confirms backwards compatibility. This would mean you’d be able to play any games from the Xbox One library on the Xbox Series X, so you’ll have access to the likes of Forza Horizon 4, Cuphead, Gears 5 and many third-party titles.

Would you prefer an Xbox Series X or Google Stadia? Let us know @TrustedReviews on Twitter