Announced at this year’s E3, Wolfenstein Cyberpilot is set to take Bethesda’s heady alt-history series out of the US and charge players with liberating Paris from an enduring Nazi presence there. Beyond just moving the storyline forward from the 1960s to the ’80s, it also brings the franchise into virtual reality at the same time.

While Wolfenstein Youngblood – announced alongside Cyberpilot – will focus on Jessica and Sophia, the twin daughters of series protagonist BJ Blazkowicz, and take place in the same time period, here you’re a currently nameless hacker working for the French Resistance. Lack of identity aside, you’ve just scored a big win for the anti-Nazi effort – seizing remote control of one of the Panzerhunds, allowing you to turn the terrifying four-legged, fire-breathing monster machines against the fascist regime.

Playing an early build at Gamescom on HTC Vive, the most immediately striking element is that it looks amazing, presenting a richly detailed impression of Paris. Cobblestone streets and town squares appear lived in, with well-maintained shrubbery, intricate ironwork for benches and window boxes, and intimidating statues dominating open spaces. 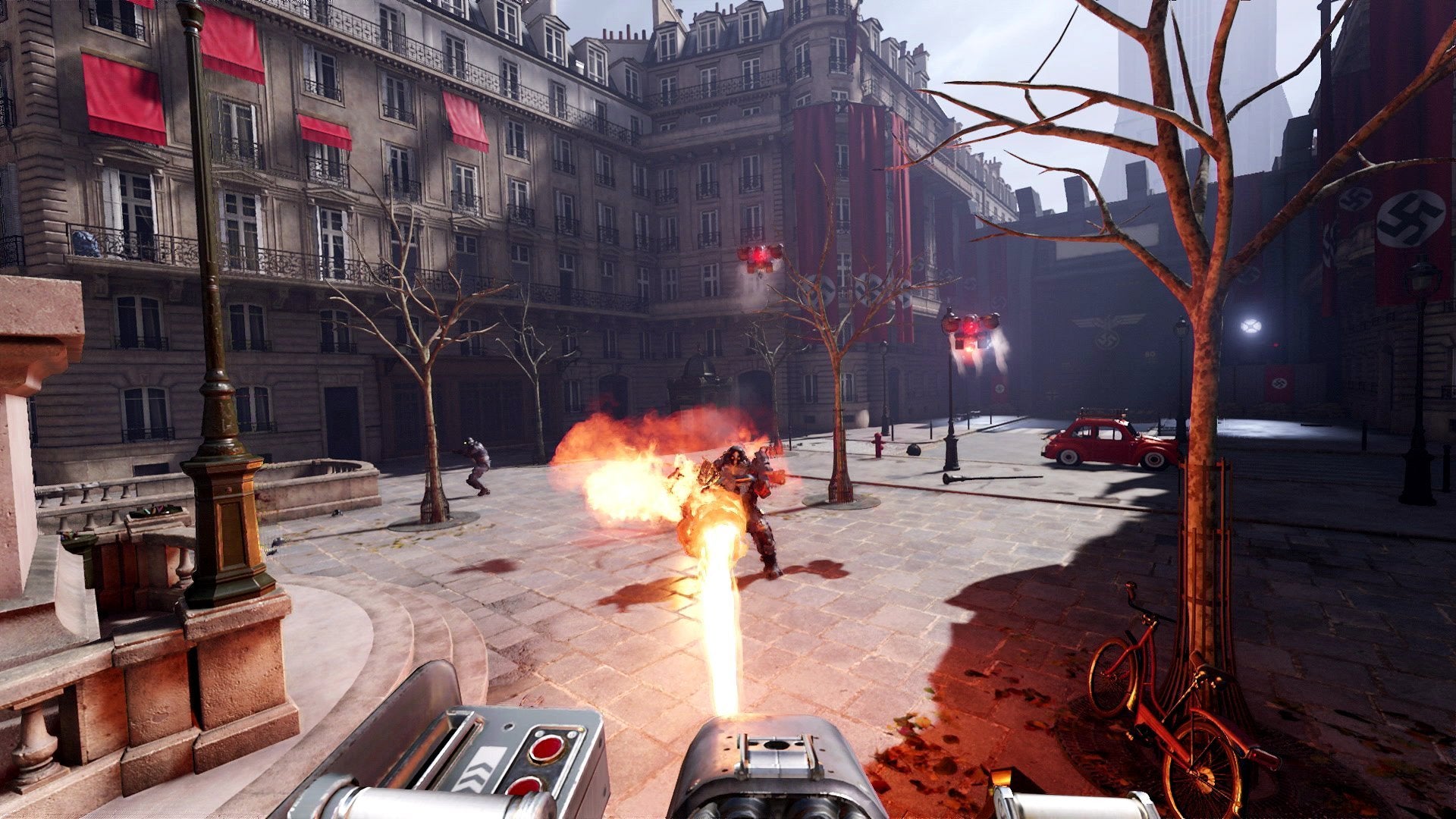 Your field of view is immense, with what amounts to a bay window of monitors presenting the Panzerhund’s perspective. There’s a similarly impressive verticality to the world too, with high buildings surrounding you and a sky full of Nazi airships hovering ominously overhead. Creating a sense of immersion is key for any VR title, and Cyberpilot certainly succeeds here.

The concept of taking a Panzerhund on a Nazi-scorching rampage is amazing and proves a lot of fun in practise. Developer MachineGames has wisely kept the controls simple – moving the Vive’s right-hand controller aims the mecha mutt’s head and the direction of its searing flamethrower, while the left-hand wand governs actual movement.

As the player, your view is from within the hacker’s cockpit, and the movement of your own head lets you take in the panorama of the Parisian streets you’re fighting to take back. There’s a level of permanence to the world too, with objects you set aflame continuing to burn, and cars you stampede aside laying in smoking ruins and scarring the pavements.

Your attacks are limited though. Holding down the left trigger makes the Panzerhund leap forward, barrelling into enemies or obstacles, while the right trigger lets the flames fly, torching everything in your path. That’s essentially it, with little on show to convince me there’s anything more tactical or even laughably over-the-top – Wolfenstein’s forte – to liven things up.

Further, while it’s a sadistic delight to see the Reich’s stormtroopers scramble around in a desperate attempt to not become human marshmallows, there’s not much in the way of artificial intelligence from the regular foot soldiers. However, there is a pleasing amount of enemy variety, even in this early build.

As you eradicate the grunts, more powerful forces are dropped in from those aforementioned airships, including heavy armoured soldiers brandishing the fan-favourite Lasergewehr – an armour-piercing laser cannon – and floating drones that swarm around you like gnats, not doing much damage but designed to distract.

Hopefully, this diversity in opponents is expanded further in the final version. Annoyingly, the slice of the game that publisher Bethesda was showing at Gamescom intentionally cuts short right as another model of Panzerbeast leaps in, not allowing me a chance to see how combat holds up against it but boding well for more intense encounters. 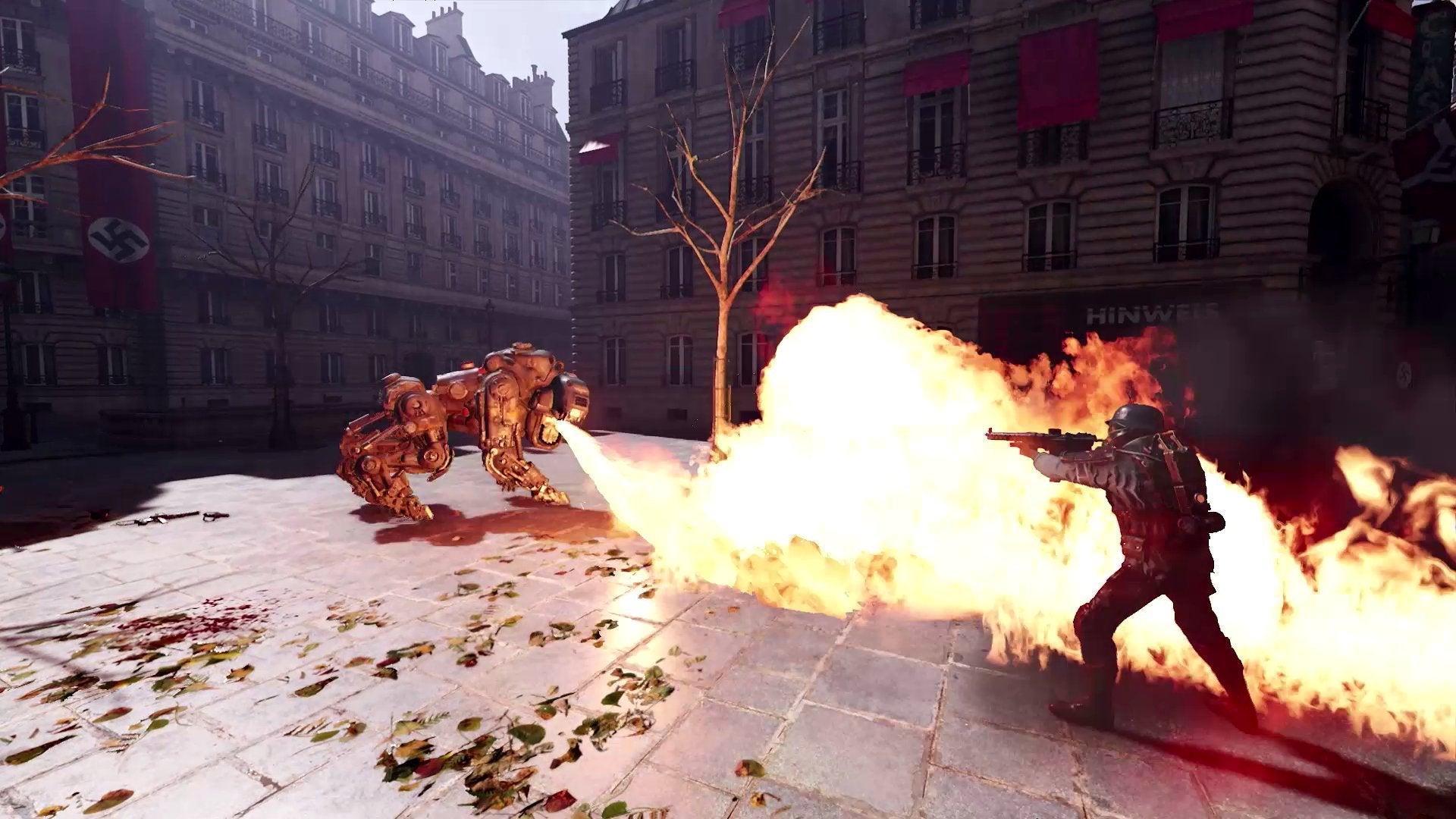 My main concern at this point is that there doesn’t feel to be enough gameplay variety to keep players’ interests sustained for more than a couple of hours, tops. Using the Panzerhund as a blunt instrument to stomp over fascist scum or head-barge Nazi tanks is fine, and using the fire breath to flambé the remnants is incredible, almost cathartic fun. There just doesn’t seem to be much more to the game than that, on repeat, at this point.

Hopefully, the Panzerhund’s range of movement will be improved too, making use of the world’s verticality. In the core Wolfenstein: The New Order and Wolfenstein II: The New Colossus games, the canine monstrosities will climb over obstacles to hunt you down, or jump on top of buildings to pounce from above. No such predatory action was on show here, and a complete absence from the final version would feel like you weren’t getting the fullest experience.

Yet that may be the point – with Cyberpilot set concurrent to Youngblood, it very well could be a deliberately shorter project, rather than a lengthy VR campaign that significantly adds to the wider Wolfenstein narrative. A more intricate moveset, better enemy intelligence, and perhaps even customisation options for your Panzerhund would elevate this to something potentially quite special though, but at present, it’s shaping up to be a fun but repetitive side project.

Wolfenstein Cyberpilot trailer – how does it look?

Wolfenstein Cyberpilot release date – when is it coming out?

Bethesda has confirmed that Wolfenstein Cyberpilot is set to launch in 2019 for all major virtual reality headsets.