In his continuing quest to see how far Microsoft Windows has progressed over the past 20 years, Simon Osborne-Walker has taken his 1995 time-travelling tech trip to a whole new level…

So hopefully by now you know the score. I’ve been immersing myself in the tech and fashion of the ’90s to see just how far we’ve come since Windows 95 first rocked the world.

So far I’ve discovered that working and socialising were a lot more effort back then, but that I’m oddly attached to wearing a jacket that rustles so loudly that it was probably the reason why noise-cancelling headphones were developed.

It’s time to find the warmth of that jacket once more, and pretend that Starbursts are still called Opal Fruits.

I need a distraction. I need something to take my mind off the incessant itching around my neck.

It started off as a light tingle. Then came the funky green rash. By the time I’d realised that it was a dubious idea to wear a nasty, chunky gold-plated chain I bought from a stall on a tropical island in the ’90s, it was too late. I now smell of Germolene and I’m counting down the hours until I can take another antihistamine.

Between bouts of frantic scratching, I jot down a list of movies with the potential to act as an audio-visual anaesthetic. Boy was 1995 a vintage year for cinema! I set off for town with a spring in my step and the theme tune to GoldenEye sweeping grandiosely around my brain.

Eight charity shops later – in three of which I’m offered unsolicited medical advice by well-meaning pensioners trying help with my neck rash – I’ve got a stack of classic films under my arm. There’s Braveheart, The Usual Suspects, Hackers, Se7en and Toy Story (for my kids, yeah?). All on VHS. 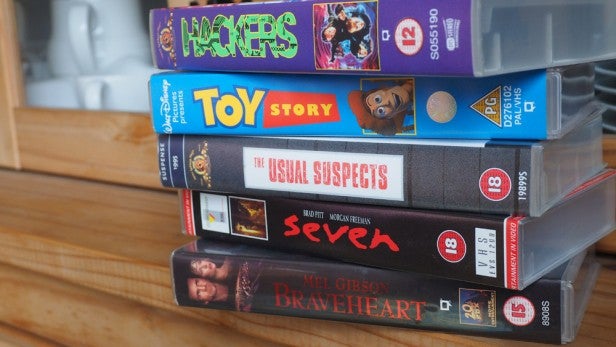 It’s incredible to think that just 20 years ago there were no DVDs and certainly no online video streams – you were lucky if you even got a GIF to run smoothly on a dial-up connection. For visual entertainment, you didn’t really think to switch your computer on.

So I’ve got a hefty tower of plastic video cassettes containing rattling reels of rapidly degrading magnetic tape, and there’s a perverse part of me that’s relishing the thought of soft, fuzzy footage. When I look back on my childhood, I see it in the flickery style of worn-out VHS.

Then disaster. I hit an unexpected snag that makes we want to lock myself in a room and listen to Bon Jovi’s These Days until I’ve got no tears left.

You see, while I’d expected not to be able to find an old CRT telly that actually worked, I wasn’t banking on that fact that VCRs also seem to have gone the way of Stephen Baldwin’s acting career. I hadn’t worried that there were none sitting in any of the charity shops, but now I’ve found that you can’t even buy them in Argos any more, all hope has died.

What’s even more disappointing is that I won’t get to use the Casio CMD-40 watch I dug out to complete my ’90s fashion ensemble. It has a built-in infrared transmitter that means it can double as a universal TV remote control. A lost opportunity to retrospectively look ahead of my time. Damn. 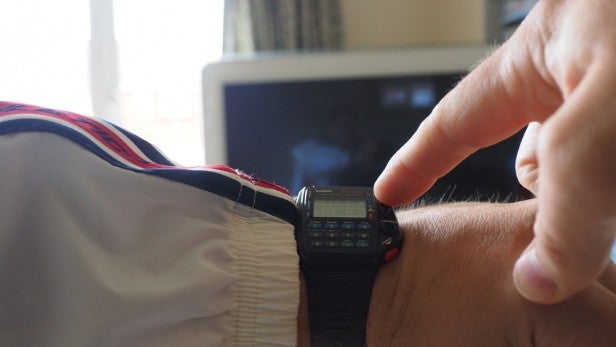 I reluctantly put my useless VHS videos to one side – and then realise what an idiot I’ve been. My Windows 95 laptop has a CD drive. CD, that wondrous silver disc that dominated music for two decades and brought every household into the digital age.

Why, you may be thinking, didn’t I have this epiphany while passing the CD racks on my charity shop crawl? To be honest, I think I mentally blanked them because I’ve got boxes of the things “archived” in my loft. I haven’t quite got to a stage where I can let go, even though I never spin them. Now it’s their time again.

Half an hour later, I climb down the loft ladder with an armful of classics. All killer, no filler. Oasis, Radiohead, Pulp, Tricky, Alanis Morissette, and even some cheeky drum’n’bass to round things out.

1995 might have been a great year for movies, but it was truly momentous for music.

I pop the CD drawer on my vintage laptop, open Windows Media Player and settle back. 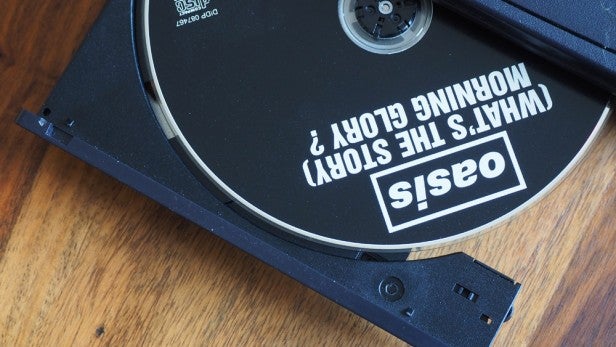 I must have forgotten to turn the volume up… No. Device driver problem? Doesn’t look like it. Erm, does this thing have speakers? No. No, it doesn’t. I’m still being an idiot, and one who’s obviously become accustomed to every mobile device being a self-contained media machine.

I dig out some suitably retro headphones – foam earpads and all – and plug them in to finally get my much-needed distraction. I’m hardly thinking about the itchiness at all now. This was it; this was the turning point. Windows 95 started a multimedia revolution from which we haven’t looked back.

Appropriately enough, I’m soon listening to “Don’t Look Back in Anger.” I certainly won’t, Noel, thanks.

Disappointingly it didn’t take long to exhaust my supply of CDs, and sooner than expected I’m singing Radiohead’s “Creep” to myself while I remove my ’90s apparel and step, metaphorically, back into 2015.

I’ve got to that point, like when you’re on the dancefloor and the DJ kills the music, the lights come on and you don’t want the night to end. Thankfully there’s no bouncer to shepherd me out of my own home, so I boot up Windows 10 on the Microsoft Surface Pro 3 and head to the Start Menu. This is where I start my journey into Groove Music.

No more rummaging in the loft, no frustration because I lent an album to someone I haven’t seen in years, and no heartbreak at a tiny scratch making my favourite song skip. I simply search Groove Music for the artist, song or album I want and start streaming instantly.

I check out a couple of new bands I’ve heard chatter about on Twitter and then decide to be a little more adventurous. I browse through new releases and start picking tunes at random. I’m like one of those guys who walks into record shops with his own portable turntable and headphones, trying before he buys. Except no one can see me to point and laugh, and I haven’t had to grow a tremendous beard and squeeze into jeans so constrictive that they make my thighs squeak while I walk. I haven’t even left the sofa.

All this listening – and I’ll be honest, the enthusiastic singing along – has left me in need of a lie down. I crash on the bed and remove the Surface Pro 3 from its keyboard cover. In just a couple of taps on the touchscreen, I’m into Films & TV, where I flick through the latest on-demand movie releases and TV shows in the Store. 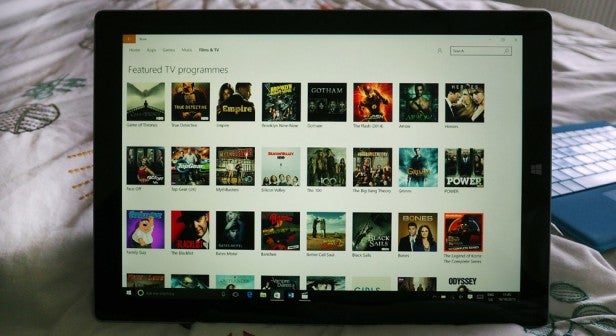 I browse a few shows I’ve thought about watching, but my eyes are led to some recommendations for similar series I haven’t heard of and I earmark them for a later date. I was experimental in my music choices earlier; now it feels like time to snuggle into something familiar.

Within seconds I’ve bought and started watching the whole second series of Silicon Valley. The picture’s neither soft nor fuzzy. It’s super-sharp, and I nod to myself as I realise how silly I was to want it any other way.