The Windows Anniversary update is coming this summer, and we’ve got all the details on what you’ll see from the big upgrade.

Announced today at Microsoft’s build Keynote, the firm unveiled a few new features that it hopes will get its users excited.

The biometric security platform, Windows Hello, can now be integrated into websites via Microsoft Edge. This means you can use either your face or your fingerprint to log into websites you use regularly, such as your online bank, if they choose to support it. Of course, there are very few devices on the market that work with Windows Hello, and even fewer websites that currently support it. However, as the tech becomes more pervasive, navigating the web could be come a fair amount simpler. Of course, all of this only work if you use Microsoft Edge.

2. Surface Pen gets a lot smarter with Windows Ink platform

This is again a very specific update for people running devices that support the Surface Pen. Double tapping the top of the pen appears to no longer bring up OneNote, and instead brings up a side bar with shortcuts to various tools that work with Windows Ink. 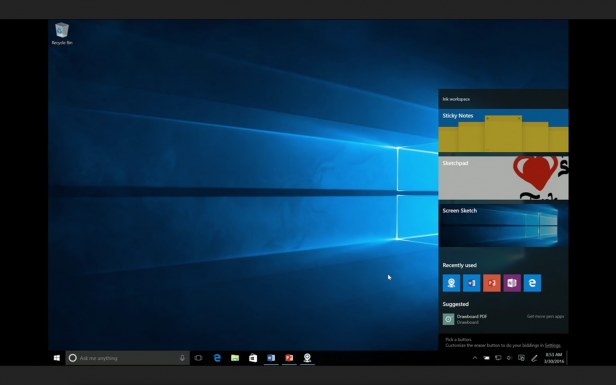 These include Sticky Notes (see below) and the Maps app, which allows you to draw directly onto 2D and 3D maps to make measurements and plan routes. 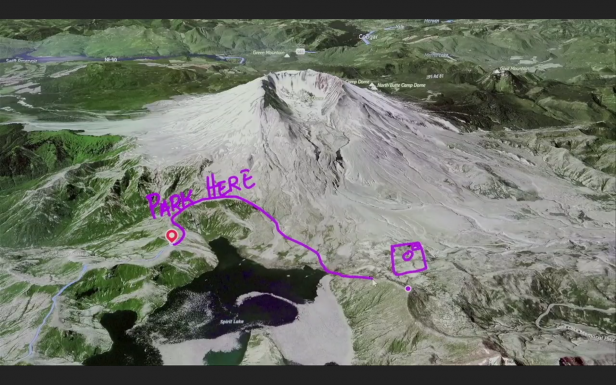 Microsoft made a big deal about Sticky Notes. If you like to use the Sticky Notes app for reminders, your notes will now automatically convert to Cortana reminders if it spots keywords in your note. For example, if you say ‘Finish project tomorrow’, Cortana will see the word ‘tomorrow’ and create a reminder for you, so not only do you have a Sticky Note, you also have a reminder that’ll appear on your other devices that are connected to your Microsoft account. 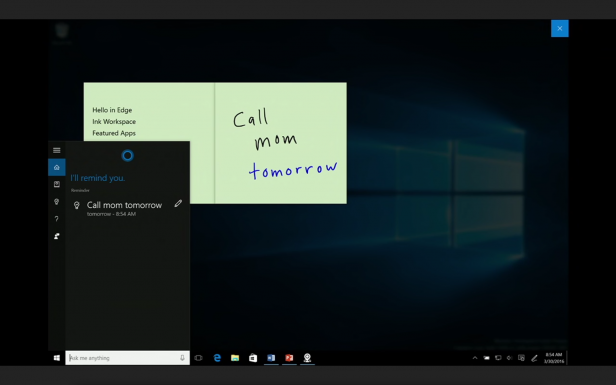 This could be very exciting. Older applications that were developed for Microsoft’s Win32 and .NET can now be converted into Modern apps (ApX) with a single batch converter. Without any code modifications, a legacy application can be converted to a Modern App and supported to the Windows Store. If you’re not a developer, this is still a big deal, as your favourite free applications may play nicer with Windows 10 with less work than was previously required.
Related: Build 2016 keyote in numbers
This will also work with games. Microsoft used the example of Age of Empires II HD Edition, which it converted to an ApX that still worked with Steam. This means games can be hooked into Windows 10’s various APIs including Live Tiles and notifications.
Microsoft also announced that it would be bringing the Bash comand line, which is used for developing binary apps and only found in its pure form on Linux, to Windows 10. This is a big deal for developers.

A whole bunch of new Cortana comands are coming, including a shut-down command much like ‘Xbox Off’ on the Xbox One. Later in the keynote, it was also revealed Cortana is now coming to the Lock Screen of Windows 10, meaning you can now ask Cortana questions without having to log in.
You can now also perform commands such as sending files to your contacts. The example ‘send that PowerPoint I worked on last night’ was used, and allows you to send a file directly from Cortana over email without opening your email client. Cortana can also suggest extra commands, such as booking a table at a restaurant for a meeting taking place at lunch time. This all works by hooking into Windows 10 apps, that can now talk to Cortana when it’s relevant to a given command. This is called Proactive Actions, and is now open to developers.

Tell us what you thought of Microsoft Build 2016 in the comments.