The Samsung Galaxy S5 release date has finally arrived, so now you can snap up the HTC One M8 rival from a variety of online and high-street retailers.

You can purchase the Samsung Galaxy S5 from Carphone Warehouse now for £569.95 SIM free or on contracts starting at £42 per month with no up-front handset cost.

If
you’re trading in any older phone, you can get it on contracts from £33
per month. Also, if you trade in an old handset when purchasing the Samsung Galaxy S4 successor, you can get £100 on top of the trade in value of your older device.

Similar to its retailer rival, Phones 4u
is offering the Samsung Galaxy S5 for free on contracts starting at £42
per month. You can opt to buy it SIM free from Phones 4u for the same
£569.99 as well though, if you want to keep your current contract.

Setting it apart from alternative retailers though, Phones 4u is offering a free Samsung Galaxy Tab 3 7.0 and £25 Google Play store voucher for any Galaxy S5 bought on a 4G contract.

The Samsung Galaxy S5 price from EE starts at £59.99 up front on £39.99 per month contracts. That tariff offers 2GB of 4G data with unlimited texts and calls.

If
you want a little more data though, you can bump up to a £44.99 per
month contract for 4GB of 4G data and unlimited calls and texts. This
does reduce the upfront cost to £19.99 though, which is an added bonus.

From Three you can get the Galaxy S5 on a choice of three different 24 months tariffs, all offering 4G connectivity and free 0800 calls.

If you fancy a bit of Galaxy S5 Vodafone action, you can get the device on both 3G and 4G contracts.

On a 3G contract, Vodafone is offering the S5 for free on tariffs starting at £37 per month. This offers 2GB of data and unlimited texts and calls.

If you want 4G speeds though, you’ll need to pay £42 per month to get a free handset. This does offer 5GB of data and unlimited texts and calls though. You also get a choice of a Spotify Premium or Sky Sports Mobile TV package with a 4G contract too.

Of course, if you want the gold Galaxy S5 you will have to buy yours from Vodafone, as currently it’s exclusive to them.

Until April 23, O2 is offering a special Samsung Galaxy S5 deal on its £43 per month tariff. For this price you’ll get 5GB of 4G data and unlimited calls and texts.

Normally, to get a free handset you’ll have to pay £48 per month, which offers 8GB of 4G data and unlimited texts and calls.

If you sign up for any tariffs offering at least 5GB of data, you’ll be able to get access to Sun Plus. You’ll get 6 months Sun Plus and Sun Plus Goals access for 5GB tariffs, and 12 months for 8GB tariffs.

All these are of course O2 Refresh tariffs, which splits out the cost of the phone from your airtime plan, letting you upgrade early if you so wish.

You can now pick up the Samsung Galaxy S5 from Virgin Media, with Virgin Media broadband customers able to pick up a handset on contracts starting at just £29 per month with a maximum £99 up-front cost.

However, if you aren’t a Virgin Media customer
already, tariffs start at £39 for 100 minutes, 250 texts and 250MB of
data, which is very pricey.

The actual tariffs are rather complicated though, so take a look at the graphs below. 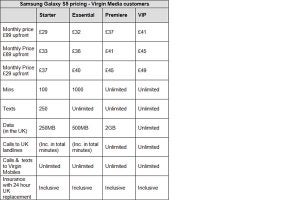 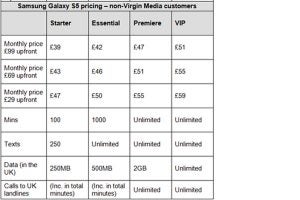 If and when further retailers and providers announce their S5 availability, we’ll update this page.