As video games become ever more visually impressive, Nick Cowen explores whether there is something to the idea they can affect the behaviour of players… in-game at least?

I used to believe that video games couldn’t be blamed for behaviour problems exhibited in their audience. This was because the debate on the medium’s violent content wasn’t really a debate at all for a very long time. When video game violence hit the news it existed solely as a means for media pundits and outlets to pump up audience numbers by positing the notion that violent games were capable of turning children into anti-social, blood-crazed werewolves.

In light of how the medium looked a decade or so ago, these claims seemed ludicrous. The fact that most pundits had neither played the games they were lambasting, nor tapped up the expertise of the media that covered them in any meaningful sense, lent credence to the notion that they were being woefully inaccurate in their claims. Seriously, was anyone going to embark on a shooting spree because they’d played Doom? Gaze at the pixelated creatures below and recoil in horror! 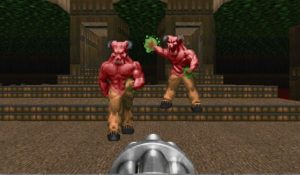 There was a time, believe it or not, when pundits were touting Doom as a corruptor of youth

Still, as games have become ever more visually impressive over the years, it’s become harder to dismiss the idea that games have no impact on their audience beyond simple entertainment. That’s not to say the gaming medium is capable of transforming innocents into abusers. But it’s impossible to dismiss the notion that that the violent content in games can’t have some affect.

I know it can. I have first hand experience of this as recently as six years ago.

October of 2008 saw the release of a particularly nasty – and brilliant – horror video game called Dead Space. Anyone who played this EA sci fi horror title will know that at the time it was – and to a degree it still is – an effectively terrifying piece of work. It wasn’t ground breaking in terms of its plot, mechanics or even presentation. In fact, it looked like a love letter to the sci fi movie genre that spawned it; the story of a lone individual stalking a dimly-lit spaceship filled with monsters was taken from Alien, the protagonist’s name referenced two of sci fi’s best known authors and the grill on his helmet was a dead-ringer for the cockpit of the titular spaceship in Event Horizon. 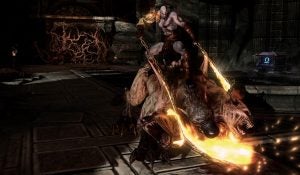 Buckets
of blood: As game visuals have improved, violent content in titles like
God Of War has become far more realistic and visceral

It didn’t hurt that Dead Space was filled with hair-raising set-pieces, visually disturbing creatures and had a soundtrack and score disturbing enough to earn its composer, Jason Graves, two Baftas. But on top of all that, Dead Space managed to burrow its way into my head and it had a disturbing effect on my in-game behavior.

Horror is a complex beast. The darkest and most unpredictable of all genres, it can be difficult to master and in the hands of amateurs it seldom adds up to anything more than cheap shocks and gory imagery. For a horror yarn to resonate it needs to do something beyond simply scare the pants off its audience; it needs to burrow past the neural receptors and curl up somewhere around the cerebral cortex. It needs to be more than a bundle of jack-in-the-box scares or extended moments of creeping tension. It needs to contain at least one moment, which takes up residence in the memory permanently. 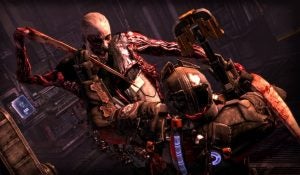 Effectively terrifying: Dead Space was easily one of the best new Survival Horror IPs of the last generation

Dead Space’s crowning moment occurs at the beginning of Chapter 10, when Isaac steps off the tram and finds himself in a waiting room that’s been set-up to look like a church. The chairs have been moved into neat rows and a makeshift alter has been constructed at the far end. The entire room is filled with cadavers and there are no signs of a struggle. It’s almost as if the people in the room created a space to find whatever spiritual closure they could and then killed themselves. The lack of any noise in the room, save the ever-present thrum of the ship, and the pale lighting makes the whole scene look incredibly eerie.

I moved through the room, went upstairs, did some sundry tasks, shot some monsters – by this stage in the game I was almost numb to the terrors of the Ishimura – and came back down to the waiting room. At this point I was ambushed and killed by a pack of snarling creatures. I reloaded and replayed the section; moving into the waiting room a little quicker and taking aim in the direction that the creatures had a attacked me from the last time. I saw one humanoid monster approaching and a flying horror reanimating one of the many corpses littering the room’s floor. After dispatching the pair of them, I came to a realisation I probably should have made earlier in the game: every dead body is a potential enemy. 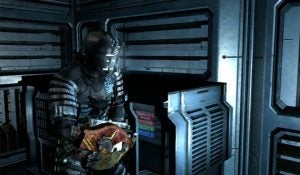 The Ripper: An nasty little weapon that fires a spinning blade out inches in front of it – great for dismembering corpses

Without even pausing for thought, I selected the Ripper from my inventory and then started to methodically work my way around the room, cutting off the limbs and head of every single corpse it contained. At this point, my other half walked into the room, saw what I was doing and asked me how old I was, for God’s sake. I replied that it was obvious what I was doing and that I had a good reason for this large-scale dismemberment. Her reply stopped me dead in my tracks.

“You have a good reason for chopping dead bodies up with a chainsaw?”

Infectors are pesky creatures who have the ability to turn any dead body into an attacking creature.

I thought about the implications of that. Then I thought about the fact, that yes, I had a good reason for doing it. And then I began to wonder what the size of Isaac Clarke’s therapy costs would be, if he were a real person and his circumstances had actually placed him into the mind-frame where cutting up human beings with a saw was a good idea. I’ve done a lot of violent things in video games. But I’ve played no other game which has caused me to think of human dismemberment as an activity I’d carry out as a matter of course, with very little thought before or after the fact.

In that one instance, Dead Space brought me to a mental space, which, when I look back on it, I find incredibly chilling. And I didn’t even notice until I took a step back from the screen. Is that the sign of a great game or is it a sign or more disturbing things to come?

Read last week’s column: Why David Cage should play The Last of Us