Let’s be real. The days of passing a new friend your phone and asking them to put in their number are probably over.

The very thought of handling someone else’s phone now, given what we’ve all learned in the last few months, seems alien. Like when you see people hugging in movies and have now retrained your brain to think that’s weird.

Anyway, we digress. WhatsApp is testing a new feature that would enable users to exchange contact details via a QR code. The forthcoming feature was spied, as usual, by WABetaInfo. WhatsApp has placed a small QR code in the settings page. Bringing this up will enable a new contact to scan it and harvest those digits.

Related: How to turn on WhatsApp dark mode

WhatsApp already uses QR codes to enable users to login to its web-based platform so it’s good to see the functionality broadened in these times of social distancing. In case the QR code is actually photographed and maliciously spread by someone you regret giving your number to it’s possible to retract the code and protect your number moving forward. 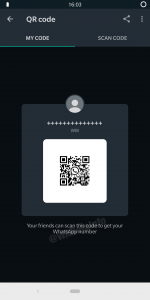 It’s not clear if and when the company plans to roll this functionality into the application, but the timing certainly would be pertinent in our current predicament.

However, WhatsApp tests new features all the time and often takes a long time to introduce them into the main app. Dark mode, for example, took an eternity to reach new users. On the contrary, the recent increase in video call numbers to eight participants happened very quickly due to the time sensitive nature of the feature, so there’s hope for this one.

Is this a feature you think you’d get use from, or are there already enough ways to contactlessly share your smartphone number? Let us know @trustedreviews on Twitter.