Emoji are everywhere but which ones you’re most exposed to will depend on where in the country you live it turns out.

Having studied the use of more than 400 million emoji over the past 12 months, predictive text keyboard specialist, SwiftKey, has revealed the most popular emoji across the UK, and the heavily used pictograms varies quite a lot across the country.

Although the tears of joy smiley is the single most popular emoji across the land for a second year running, regionally top emoji honours aren’t quite so clear.

So, what’s popular where you live?

Related: Apple blocked these emoji on your phone 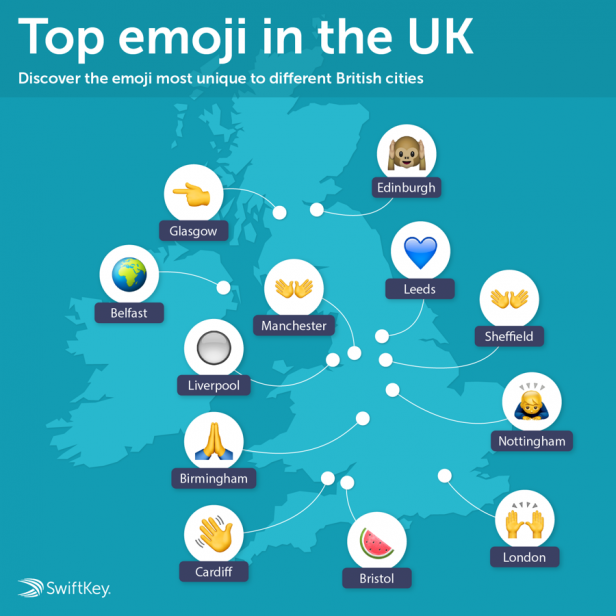 Well, if you’re from London, the study found that the raised hands emoji was the most representative of the city’s use, while Birmingham, England’s second city, favoured the praying hands emoji.

North of the board, Edinburgh used the monkey with its hands over its ears emoji, with Glaswegians unable to get enough of the pointy finger emoji – and we all know what that’s used to signify.

Bizarrely, it turns out that Bristol loves the watermelon emoji, with Liverpool enjoying the dot emoji, presumably altered to blue or red to show your side of the city’s football divide.

It’s not just what’s most popular that the study looked at either, but which emoji have fluctuated in popularity too.

While both the grimacing and expressionless emoji doubled in use over the past 12 months – you can thanks Brexit and Trump for that – use of the kissing face, fist bump and clapping hands emoji all halved year-on-year.

iPhone users recently gained a further 72 new emoji with the launch of the iOS 10.2 OS update.

What’s your favourite emoji? Let us know in the comments below.