For those of you who’ve been living in an RF-shielded cave for the last few years, TikTok is a video sharing app for iOS and Android that’s used by millions of humans over the world, and it’s now a serious contender for the spots occupied by Instagram and Snapchat. Finger on the pulse as always, Trusted Reviews thought it’d be a good idea to ask me, a past-it thirty-something Xennial, to spend a few weeks messing around on it, before reporting back.

But before we dive into my top TikTok hot tips…

Part social network, part video editing tool, TikTok is perhaps best thought of as an Instagram alternative. It’s about making fun, short-form viral content and hoping that it’ll be seen by as many people as possible. Or not.

TikTok lets you shoot and share video clips up to 60 seconds in length. Uploads can be one continuous take, or stitched together from multiple clips shot during the same session. Alternatively, you can upload video content already stored on your phone.

As with Snapchat, Instagram, and Twitter, you can amass a legion of followers by posting funny, relatable content, or if you prefer, you can take a back seat and scroll through everyone else’s uploads and enjoy the fun.

There are viral moments like the recent Emoji Challenge – where people make hand emojis in time to a beat – perspective trick videos of people pretending to belly dance into a Pringles tube to the tune of ‘Genie in a Bottle’, and more recently, the ‘Break My Stride’ craze. 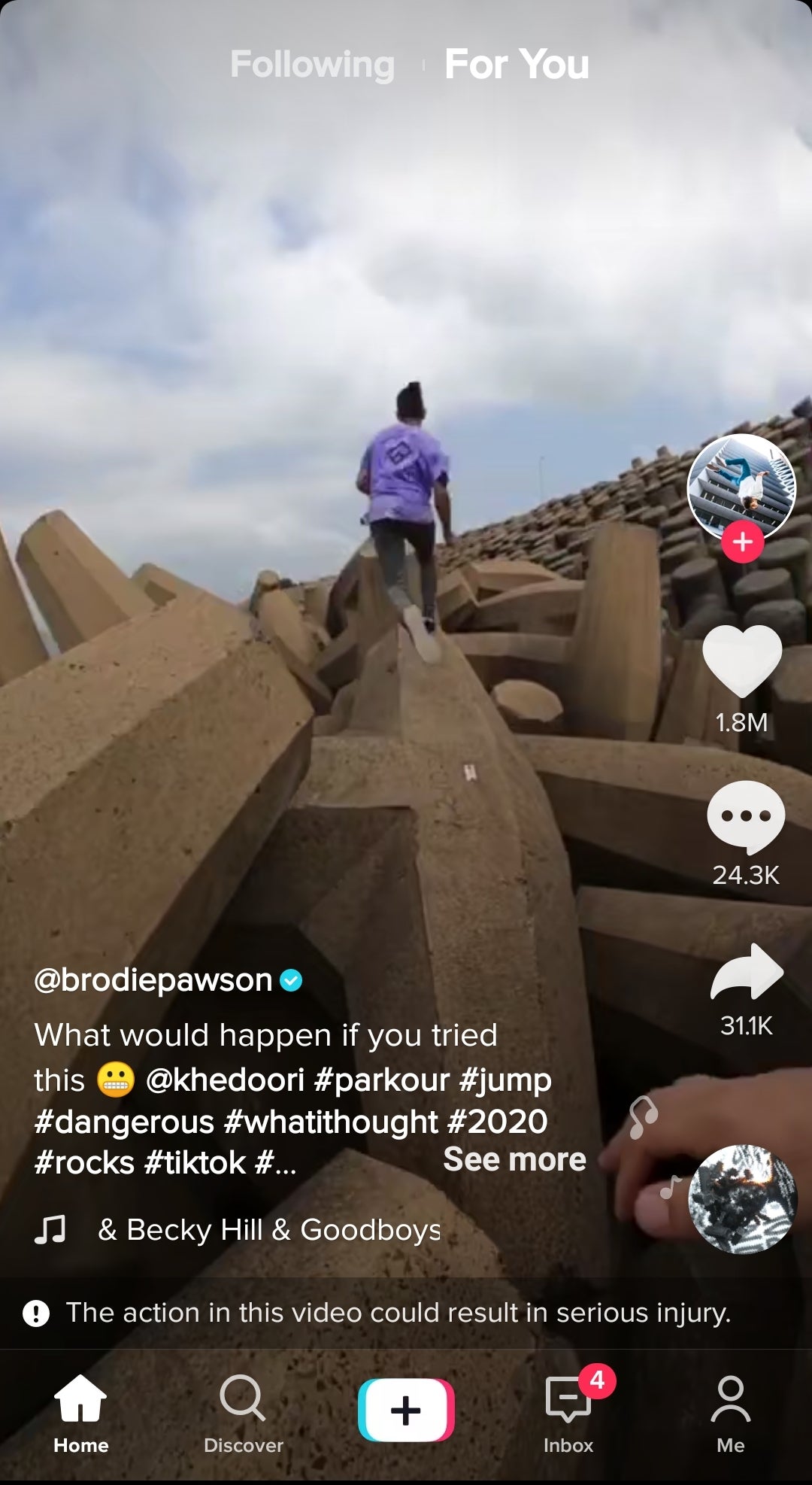 What does FYP mean on TikTok?

Part of your home page is called the ‘For You’ page, so ‘FYP’ basically means ‘this belongs on the home page of TikTok.’

Someone commenting ‘FYP’ on one of your videos, or tagging their own content with #FYP, is basically trying to punt that bit of content up on the home page. Having someone FYP your work is a compliment.

As no-one quite knows how to game the TikTok algorithm, a lot of the FYP action feels a little redundant. It couldn’t hurt to try to FYP something up, though.

Here’s a list of things FYP could also stand for (but in the context of TikTok, probably doesn’t): 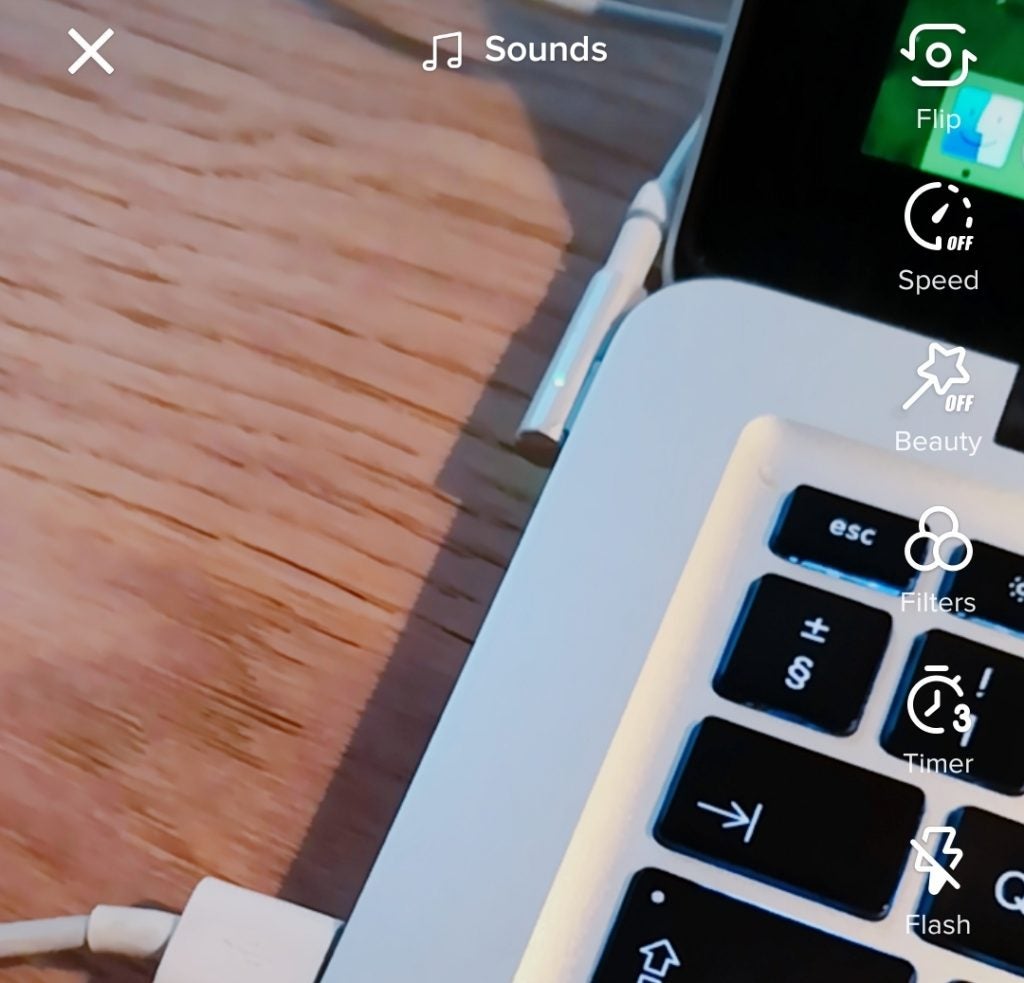 How to create TikTok videos

Creating your own TikTok content is a breeze. Hit the big plus symbol at the centre-bottom of your screen and you’ll open up the viewfinder.

Over on the right is a list of tools that let you flip between your phone’s front and rear-facing cameras, shoot in slow-motion or up to three times fast, a skin-smoothing beauty mode if you want to look like a waxwork model, as well as filters and timers.

Before you start recording, decide if you’re shooting a short or a long video. To be honest, you might as well keep it set on 60 seconds, as you can still record shorter clips this way.

Tap the big red button to record a video clip, and tap it again to stop recording. Stitching clips together is easy, fun, and addictive. If you make a mistake, or record more than you need to, don’t worry, you can trim footage when you come to upload everything. 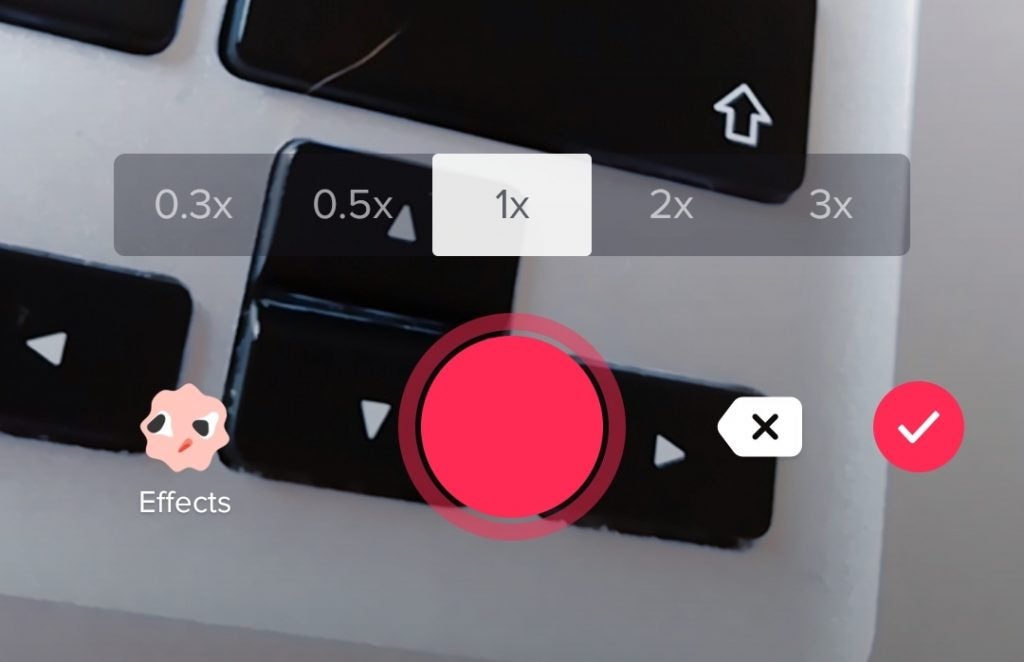 How to edit videos on TikTok

Before you upload your creation you’ll have the opportunity to trim your clips, if there’s some blurry footage towards the end of an otherwise perfect recording, and you can also edit the sequence in which your clips appear by long pressing on each segment and dragging them around.

As well as reordering video footage, you can also add voice effects, if you want to sound like a chipmunk or the guy from the Go Compare adverts.

Forgot to add filters? No worries – they can be retroactively applied in the edit. ‘Fix it in post’, like they say in the industry.

Don’t put captions at the bottom of the frame

My very first video is a clip of me traipsing around Borough Market on a busy day, which is a mistake – people shuffle along the Market at the kind of speeds that’d make a snail impatient, and without much awareness of their surroundings.

Anyway. I decided to slap some big neon hashtags of my fresh produce adventures, and, like a complete greenhorn, put them at the bottom of the frame. In other words, the part of the frame where your username, captions and other information sits, meaning my terribly witty hashtags were obscured.

I’m not the only person to not realise this though. Hey, Russell Brand, you’re doing it wrong, bro. 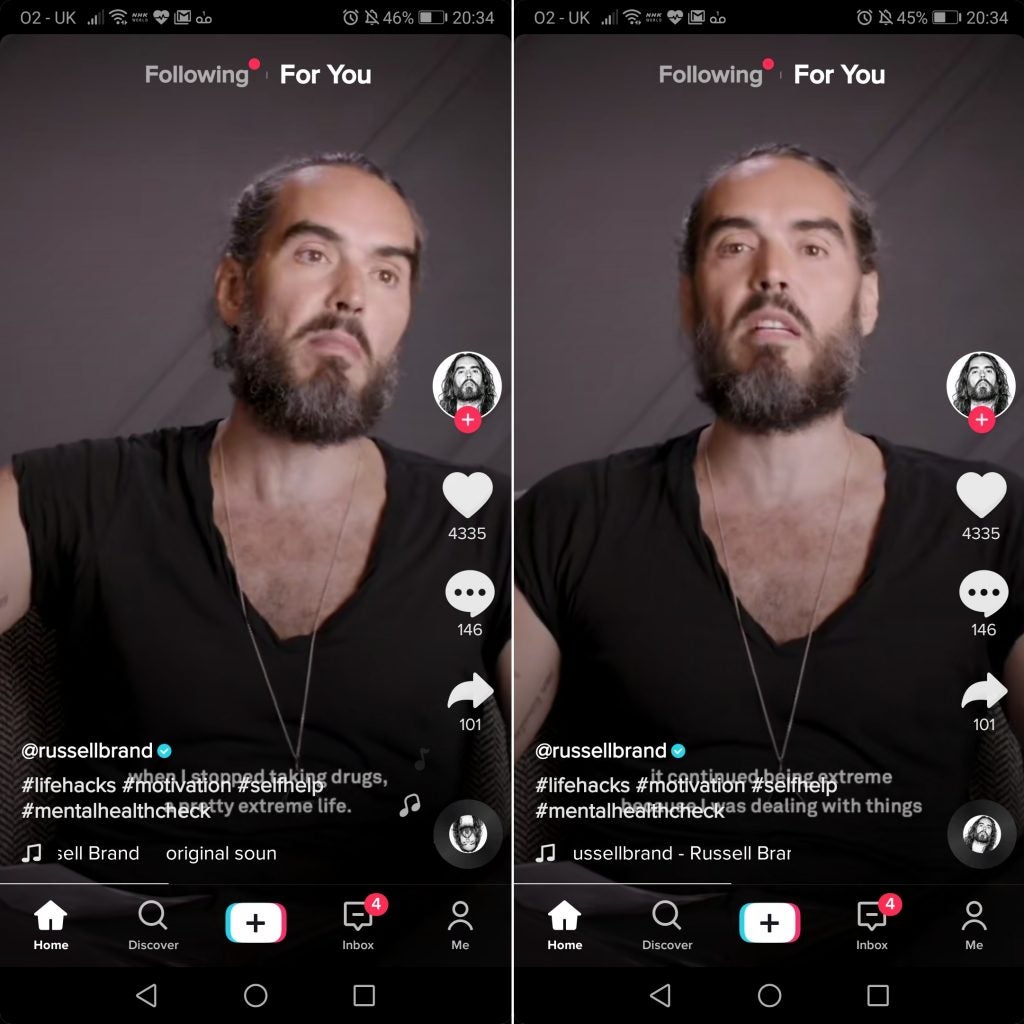 This seems like a no-brainer too, but it’s perhaps worth mentioning because early on in the week, I mistakenly fell afoul of TikTok’s community guidelines.

One of my more popular videos – a short clip of me pretending to crush it on the shoulder press – was pulled from public view. TikTok offered no explanation, and I initially assumed it’s because I’d tagged my own video with a rude word – a gymnastic variation on a well-known catchphrase.

A re-read of the guidelines gave me the answer. Because my video clip contained background noise from the gym, where the likes of Wiley, Lizzo, and Cardi B were blaring out of the speakers, TikTok’s copyrighted content detection algorithms had swung into action, decided that I was a dirty, thieving music pirate, and dished out a slap on the wrist:

Somewhat fortunately, TikTok has a selection of music clips you can add to your videos, so I was able to fire this one back up to my channel with ‘Sexy And I Know It’ attached instead.

While that’ll do for the purpose of getting my hot viral content back on the Internet for all to see, I wasn’t entirely happy, because I hadn’t intentionally done anything wrong, and this compromise meant that my video had broken the Dogme 95 rule of “sounds must never be produced, such as music that does not exist within the scene”.

A word of caution, then, to anyone wanting to upload TikToks from the gym, pub, or anywhere with a PRS licence that might be blasting out the tunes – TikTok may well not look kindly on your content.

You can use music to search

On the subject of music, an interesting feature of TikTok is that you can use its library of sounds to search for content.

Tap either the scrolling text or the little spinning vinyl icon on the bottom right, and you’ll be taken to a page populated by every video on TikTok that uses that sound. It also means if you’re chasing challenges like Break My Stride or Genie in a Bottle, it’s an easy way to see what everyone else is up to.

It’s one of the many ways you can search for content on TikTok, and adds to the platform’s overall party vibe. 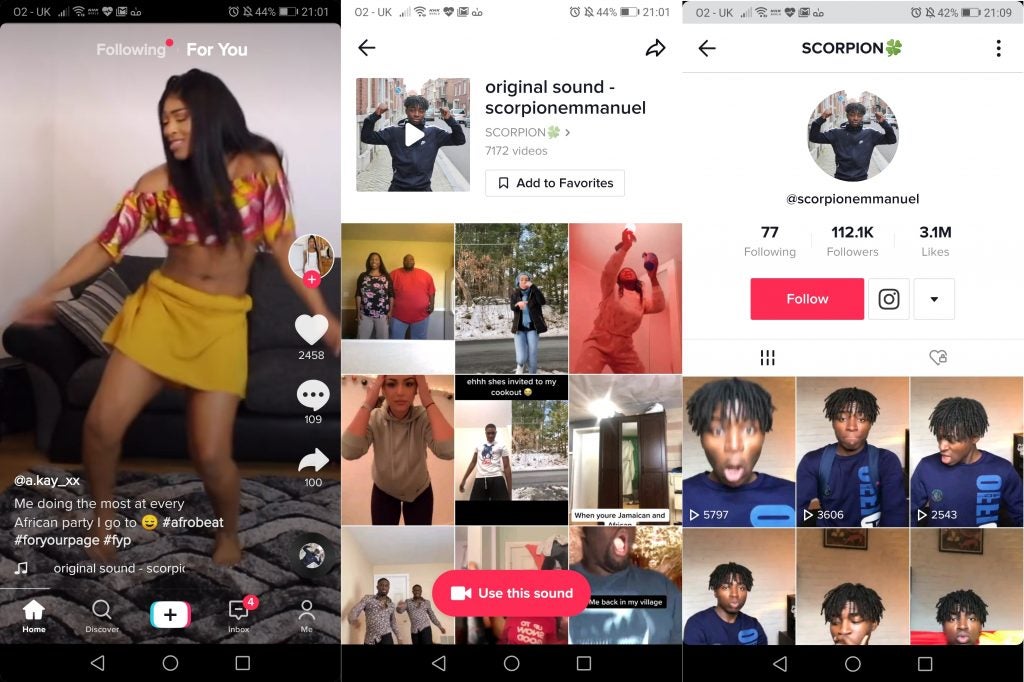 Cruising TikTok in your thirties is like turning up at the party of someone who is on the peripheries of your friendship circle, and they mostly socialise with people between five and ten years younger than you. You weren’t really invited, but you checked with the host, and they politely said yes, and, well, now you’re here and everyone’s having a great time, but… you don’t exactly feel welcome.

That’s how I felt initially, anyway. I don’t know if it’s going to be the same for everyone else, but the first few TikToks that were slung at my home page were pretty thirsty. I felt like I’d gone back in time to a bad nightclub. I could practically taste the WKD, Aftershock, and CK One seeping my phone. 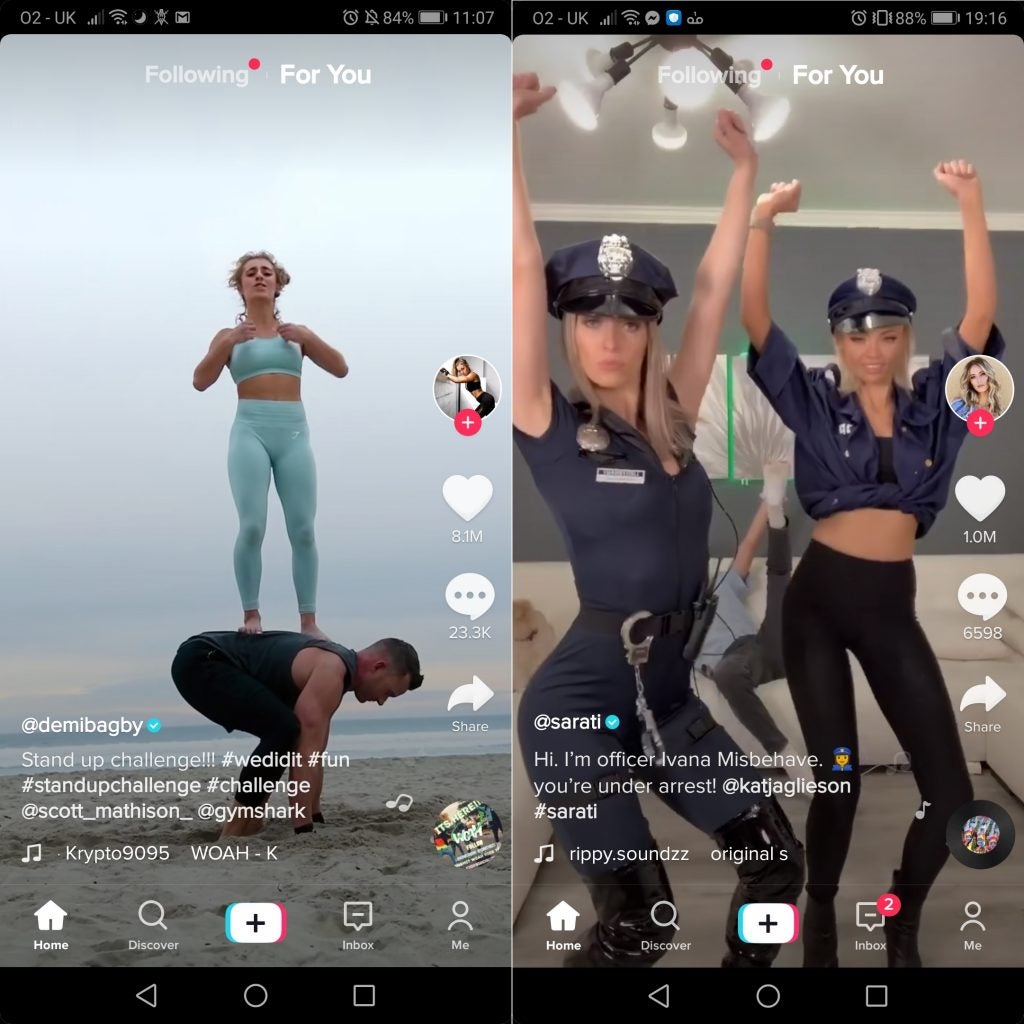 Tapping the Home icon on the bottom left lets you change up what’s on your home screen – later on I was offered parkour TikToks, TikToks of people’s culinary efforts, and, finally, cat TikToks. I’ve yet to find any Conspiracy TikTok content – there have to be some Flat Earther and Illuminati Confirmed types on here. There are a few people mocking Flat Earthers, but as far as I’m able to tell, no actual conspiracy theorists.

Perhaps that’s a good thing though – TikTok is not a platform that’s geared towards conversation and debate, and therefore it appears to be devoid of the inevitable friction that brings. You can leave comments on people’s videos, but in my experience, everything’s pretty good-natured. Besides, if I ever want to trade insults with the loud and the ill-informed, there’s always Facebook.

Maybe TikTok actively downranks any content that’s not likely to amuse or enthuse, or maybe it just is an inherently sillier and more frivolous place.

It does remind me of the early days of Twitter, when you could find yourself in a friendly conversation with total strangers about your favourite Doctor Who regeneration, or find yourself ranking all of the Findus Crispy Pancake flavours, as opposed to the toxic bastard hive it’s become.

Maybe this is the way of all social networks, and what we’re living in now is the golden age, before the inevitable decline, when TikTok becomes an attack vector in the next election/referendum.

That said, I reckon any well-funded political smear campaign would likely not work well here. As a social network, TikTok is far more chaotic than Twitter or Facebook. While both of those tweak the order in which people’s posts appear on your feed, there still is a semblance of linearity to things, and you can easily see the time at which a thing was posted.

TikTok by contrast is far harder to navigate. While you can follow people and use tags to discover content, you never really know what you’re going to get when you tap the home page icon. Sometimes I’d get a funny video, sometimes I’d get some motivational self-help jade vagina egg-flavoured crap. The Break My Stride meme passed me by entirely – it hadn’t surfaced on my page at all until after it had started to make headlines.

At times, I felt like a hooked gambler, constantly hitting the little house graphic, hoping that the TikTok roulette wheel would spin me up some hot Flat Earth content, but alas, no dice.

Maybe what I’m hoping to get out of TikTok doesn’t yet exist (or at all), but I’ll keep tweaking the home page in the hope that things will start to align with my tastes.

Related: How to delete TikTok