Google’s Project Tango could be the biggest thing to happen to smartphone technology in years. Here’s why.

When you think of Google and smartphones, you think of Android, right? But Google has its fingers in a number of smartphone technology pies, and one of the most exciting of those is Project Tango. It could transform the way you see the world – or at least, the way your smartphone sees it.

Now Lenovo has launched the Phab 2 Pro, the first Project Tango-equipped smartphone, and Asus has introduced its own Tango-equipped handset in the form of the ZenFone 3, the technology is available for consumers to try out.

So what exactly is Project Tango all about? Let’s take a look at how Google’s augmented reality ambitions could revolutionise smartphones.

VIDEO: Watch our video of Google Project Tango in action

Announced early in 2014 and developed by Google’s Advanced Technology and Projects (ATAP) team, Project Tango is Google’s attempt to get mobile phones and tablets to see the way we see.

This means granting the device full spatial awareness, or the ability to understand your environment and your relation to it.

The essential aim is to get your smartphone to understand the world around it, enabling it to provide augmented reality experiences.

More recently, the likes of Intel and Qualcomm have announced reference Project Tango devices for developers to work on, which has prompted a great deal of excitement among the development community.

HOW DOES PROJECT TANGO WORK?

A Project Tango device ‘sees’ the environment around it through a combination of three core functions.

First up is motion tracking, which allows the device to understand its position and orientation using a range of sensors (including accelerometer and gyroscope). 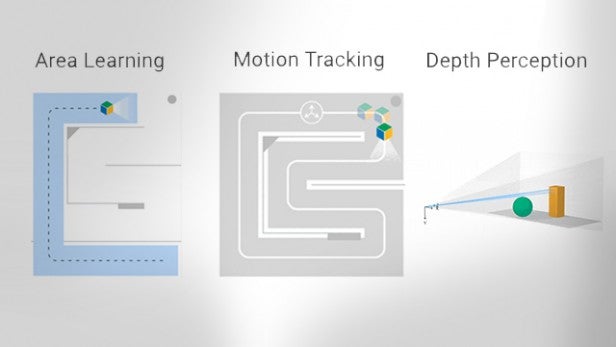 Then there’s depth perception, which examines the shape of the world around you. Intel provides a vital cog in this respect with its RealSense 3D camera. With this component on board, a device can gain accurate gesture control and snappy 3D object rendering among other things.

Finally, Project Tango incorporates area learning, which means that it maps out and remembers the area around it.

WHAT CAN PROJECT TANGO DO?

Well there’s a bunch of obvious, but useful, stuff that Tango is capable of. And then there’s the range of potential applications that people and businesses are just starting to think of.

For example you can use a Project Tango device to instantly measure a room and record an area’s dimensions. This would mean that you don’t have to stand around Ikea with a paper measuring tape scratching your head with an undersized pencil while you try and figure out if that sofa bed will fit in your spare room. You’ll instantly have the information there on your phone. 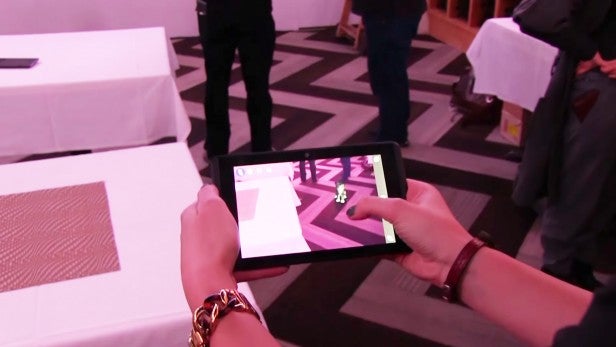 A phone or tablet packing Project Tango and a RealSense camera makes such everyday tasks a lot simpler.

There’s also potential for helping those whose eyesight may be fading. Tango recognises where a device is in relation to the environment so it can send signals by sound, or even voice, to the user. Researchers at the University of Lincoln are working on just that.

To give an idea of the potential accuracy and sophistication we’re talking about here, Intel has plugged its RealSense camera (which is utilised in Project Tango devices) into drones so they can automatically avoid obstacles – even moving ones – without the need of Wi-Fi or Bluetooth connectivity.

One of the more fun applications comes in the way of gaming. More specifically, how Project Tango can use augmented reality apps to let you play games in real-world environments.

Late last year we tried out a basic robot first-person blaster using a prototype Project Tango device. Moving around a phone mounted on a Nerf gun gave us a 360-degree view of our surroundings.

This wasn’t so different from using any accelerometer-packing smartphone with a VR app, but such apps don’t respond to your physical movements the way they do with Project Tango. Step forward with the aforementioned app, and objects on screen start to get nearer accordingly.

Related: What is Hololens? 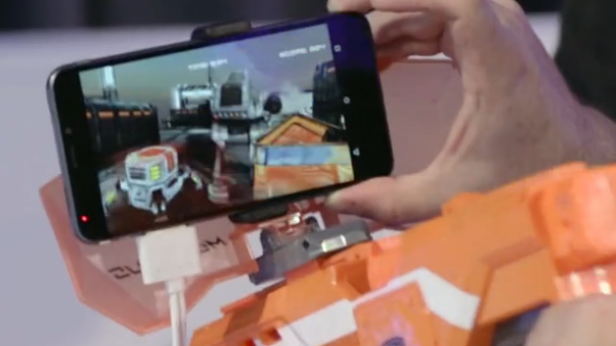 Imagine sneaking your way up to a shiny little critter with perfect accuracy in Pokemon Go before throwing your Poke ball. This element alone can bring a whole new set of mechanics to mobile games.

Then there are the game environments themselves. Maps can be created using the layout of your house or garden, making level-design far more personal and familiar.

In many ways the effect of the position tracking technology is similar to using the HTC Vive VR headset except Tango doesn’t require chunky lasers to understand the space around you, and it’s not restrained to a specific 20’x20′ area.

In many ways, then, it’s closer to Microsoft’s HoloLens in its focus on enhancing reality rather than creating a whole new virtual one.

It’s not all fun and games. Project Tango could have some genuinely useful business applications to it.

Whether it’s to map a house for an estate agent to put online or helping robots better interact with an environment, there are countless applications that can help companies do things quicker and smarter.

Collaborations with retailers like Walgreens and Target have already started in the US. Aimed at helping you part with your cash more efficiently, they’re still in their infancy but give a glimpse into the shop of the future.

We’ve seen Project Tango likened to Google’s outdoors mapping technique for its Google Maps project, but scaled down and focused on indoors environments. 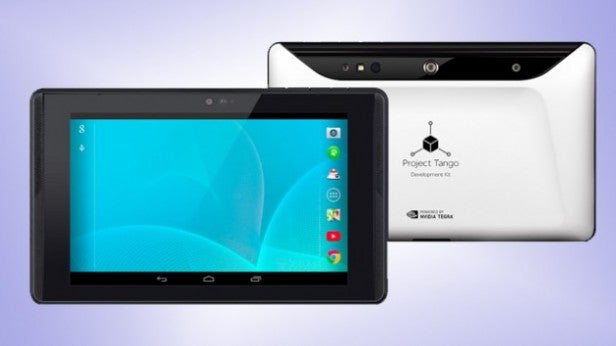 That should tell you another of Google’s grand plans here – to patch together the data from all Project Tango devices and map public indoor spaces, such as airports and shopping malls.

Among other things, it could open up a whole new level of location-based advertising when you walk past certain shops, or even certain aisles in the supermarket.

Of course, Google has a lot of pet projects on the go, relatively few of which actually turn in to full-blown projects. That’s just the way it works.

However, Google seems to mean business with Project Tango. According to a recent Bloomberg report, the company plans to make its technology ubiquitous. For the time being, it’s only available on two smartphones, but that’s set to change in the coming years.

It’s also said to be working on a way to easily share the 3D data that a Project Tango device gathers. In this way, other developers could benefit from the data captured by others – using another user’s 3D map of a museum, for example, to build a guide app.

When will it arrive?

Google has partnered with Lenovo to make the world’s first Project Tango-powered smartphone, which is available now for £499.99. Lenovo describes the Tango element of the phone as follows: “All you have to do is look through the Phab 2 Pro, and you’ll see objects and information overlaid onto the real world.  You can use these features for both practical purposes and fun: measure items with just your phone, see how new furniture or decor will look in your home, and even raise virtual pets, to name a few.”

Meanwhile, Asus used CES 2017 to unveil its Tango-equipped equivalent in the form of the Zenfone 3 AR. The Project Tango cameras and sensors use spacial recognition to overlay virtual objects onto a live feed of what the camera is seeing in real-time. 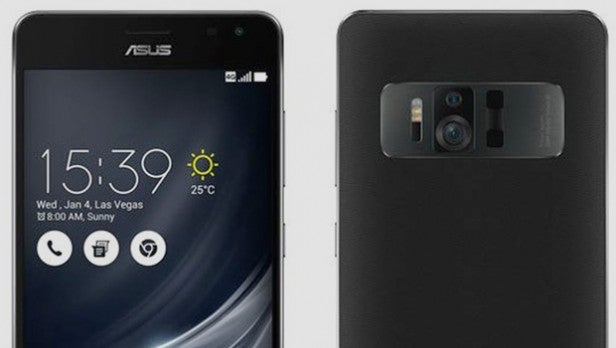 Examples of useful AR include previewing how furniture will look in your house and how clothes will look on a mock-up of your body type. Fashion brand GAP demonstrated a new shopping app that lets you enter your measurements and try on clothes on a virtual version of yourself, applying a physics engine to see how the clothes will fit and fall on your body.

Unfortunately there’s no confirmed price or release date for the Zenfone 3 AR at this point, but the handset will launch in the second quarter of 2016 according to the company. 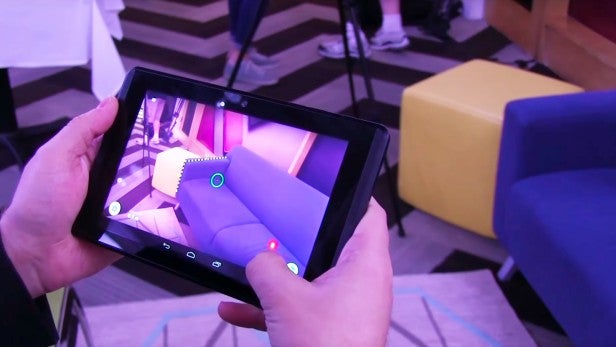 Perhaps the most exciting Tango developments to come out of Google’s developer conference last year was when Johnny Lee (via VentureBeat) showed a video demonstrating various research projects that were underway. This included ultra-precise indoor navigation in use, complete with a waypoint overlay on the phone’s display, which looks a bit like a modern first person shooter game, except those little digital breadcrumbs lead to a delicious meal or an important appointment rather than a virtual bloodbath.

Also shown off was the potential to map large buildings in 3D from the outside, while another demo showed how Project Tango could detect and remove moving objects from a captured 3D image. Google even showed off how Project Tango could help space robotics, enabling operators to accurately track the position and movements of their robots from thousands of miles away.

Are you excited for Google’s AR project to hit the market? Let us know in the comments.