When Intel launched its new Tiger Lake mobile processors, the company also revealed it will be launching the new Intel Evo programme. But what exactly is it?

We’ve provided an in-depth description of the new initiative below, so you know exactly what the Intel Evo branding represents, and why you should be on the lookout for it on future laptops.

What is Intel Evo?

Intel Evo is the second edition of the Intel Athena programme, which is essentially a branding found on laptops that pass a number of tests set by Intel. The new criteria has been set with the new advancements of Tiger Lake in mind.

The Evo specifications set by Intel include:

As you may notice, Intel hasn’t prioritised performance power here, but instead focused on usability and battery life which are more universally appealing features. Intel also clarified its target demographic for the Evo initiative are those who are consistently using laptops on-the-go and are dependent on one system for a range of tasks.

This could include office workers, students, or those who just need a laptop for basic tasks such as checking email, watching video and filling in spreadsheets. That means those who want a hulking big laptop that can blaze through high-end content creation and gaming shouldn’t really look out for the Intel Evo badge. 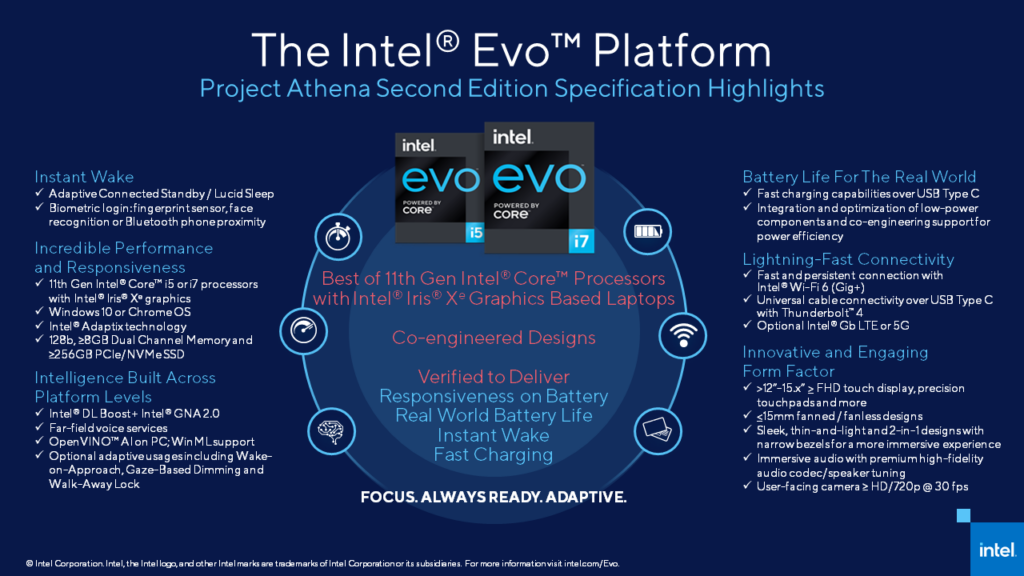 So why has Intel put so much work into Evo? We put the question to Meilssa Gregg, Head of User Experience Research at Intel. She explained that Intel Evo will “allow computing to be accessible, understandable and relevant” for those who may not be fluent in the technical specs of laptops. This means that potential laptop buyers will only need to look out for the Intel Evo badge instead of diving into the nitty gritty specs.

Melissa Gregg also explained how much research Intel has done to narrow down the requirements for the Intel Evo badge. These specifications aren’t plucked out of thin air, but are set by the research team which spends lots of time researching user behaviour. Intel has done research into what software people most often use, as well as what kind of locations people will use the laptop. Intel’s even done research to find how many web browser tabs people will typically keep one when surfing the web.

Related: What is Thunderbolt 4?

Intel has also made sure such tests aren’t simply conducted via synthetic benchmark tests, but instead via real-time use tests so they can accurately simulate the performance that your average laptop owner will experience. It’s also a pretty touch criteria, and so only a select number of laptops will actually be awarded with the accolade.

To summarise then, Intel Evo is essentially a badge that can be awarded to laptops that pass Intel’s strict criteria. These specifications have been specifically made for ultrabooks that prioritise on-the-go productivity. Keep an eye peeled for it when you’re next on the lookout for a new laptop, as it may just make your buying decision that much easier.